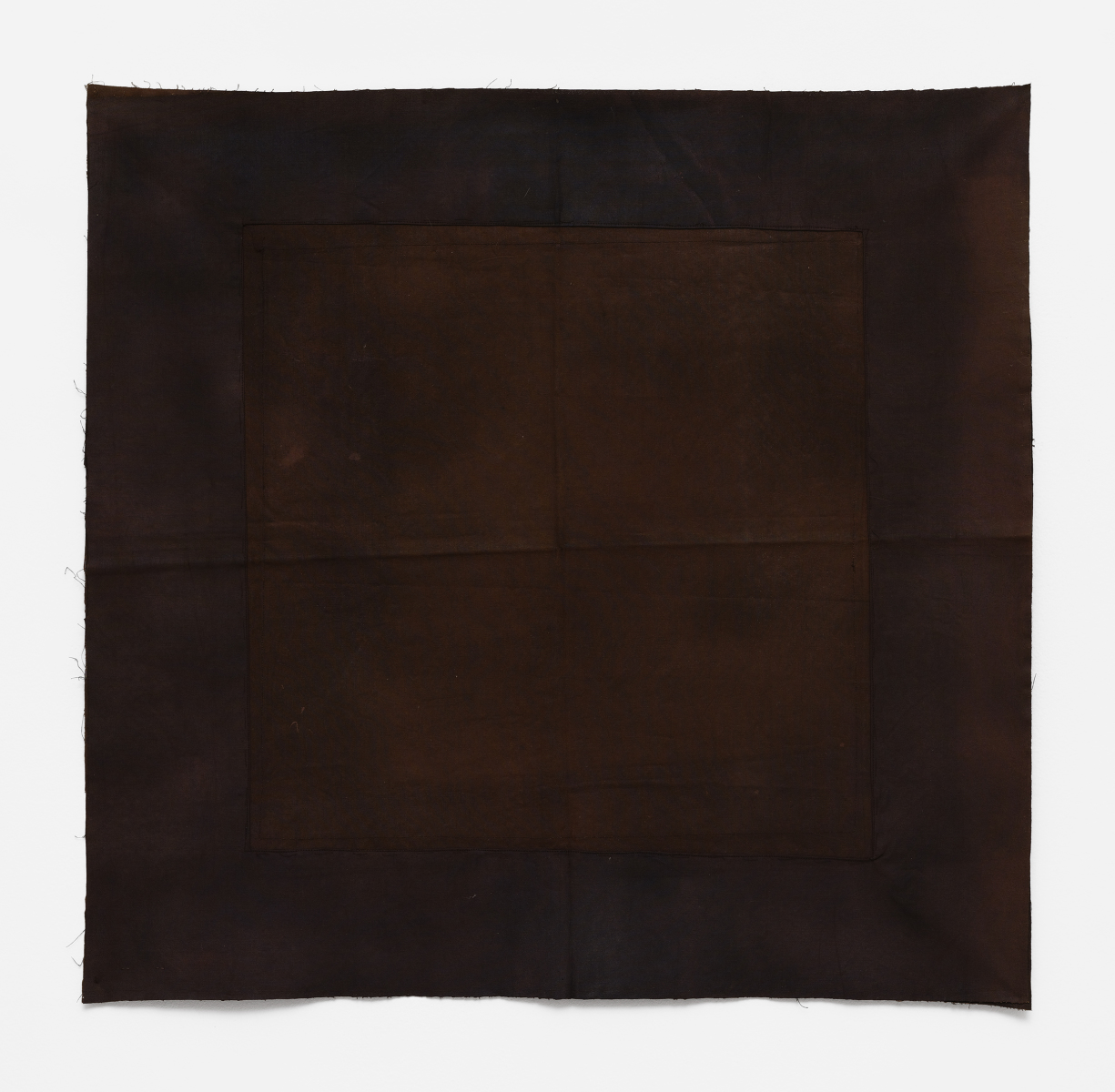 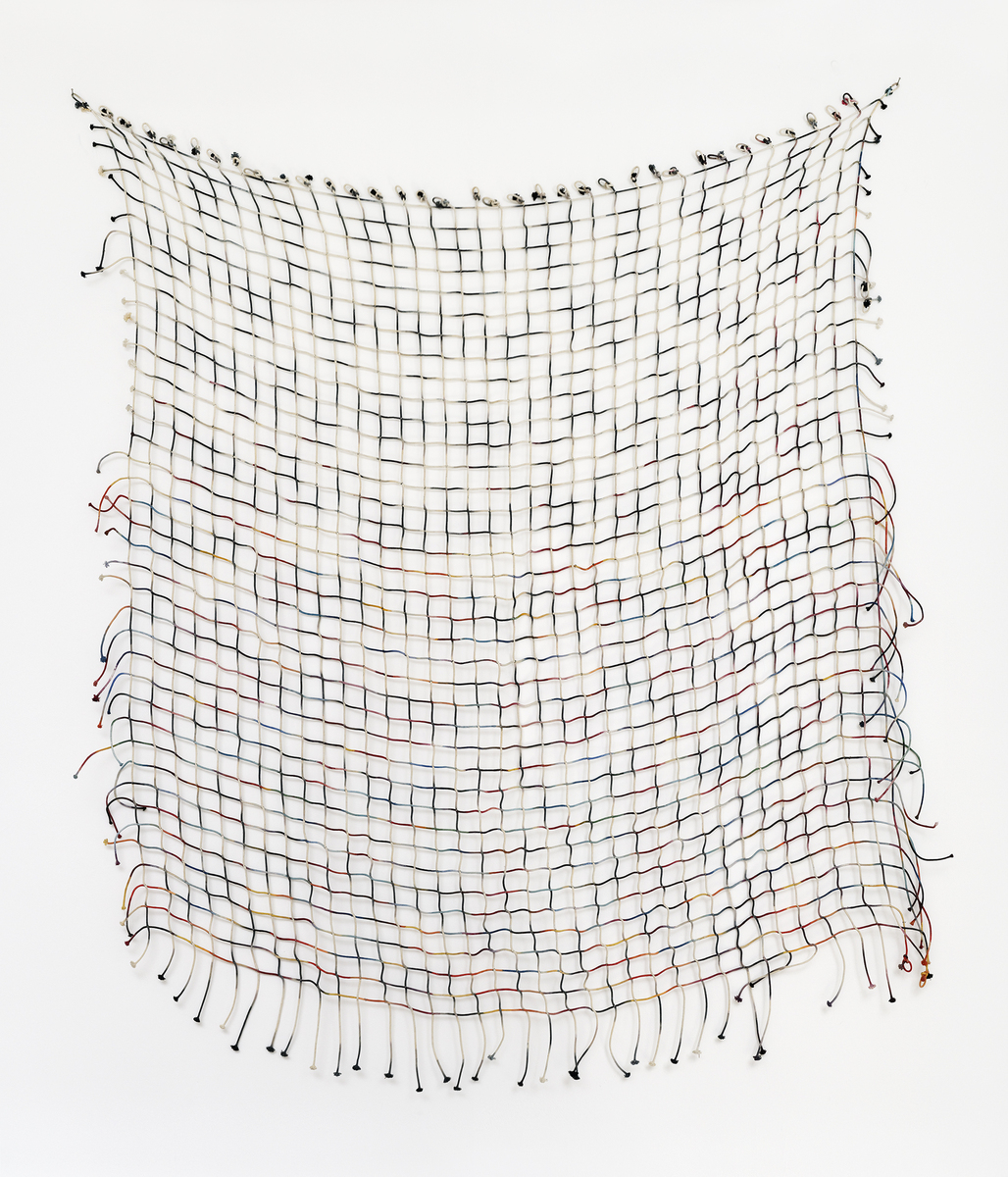 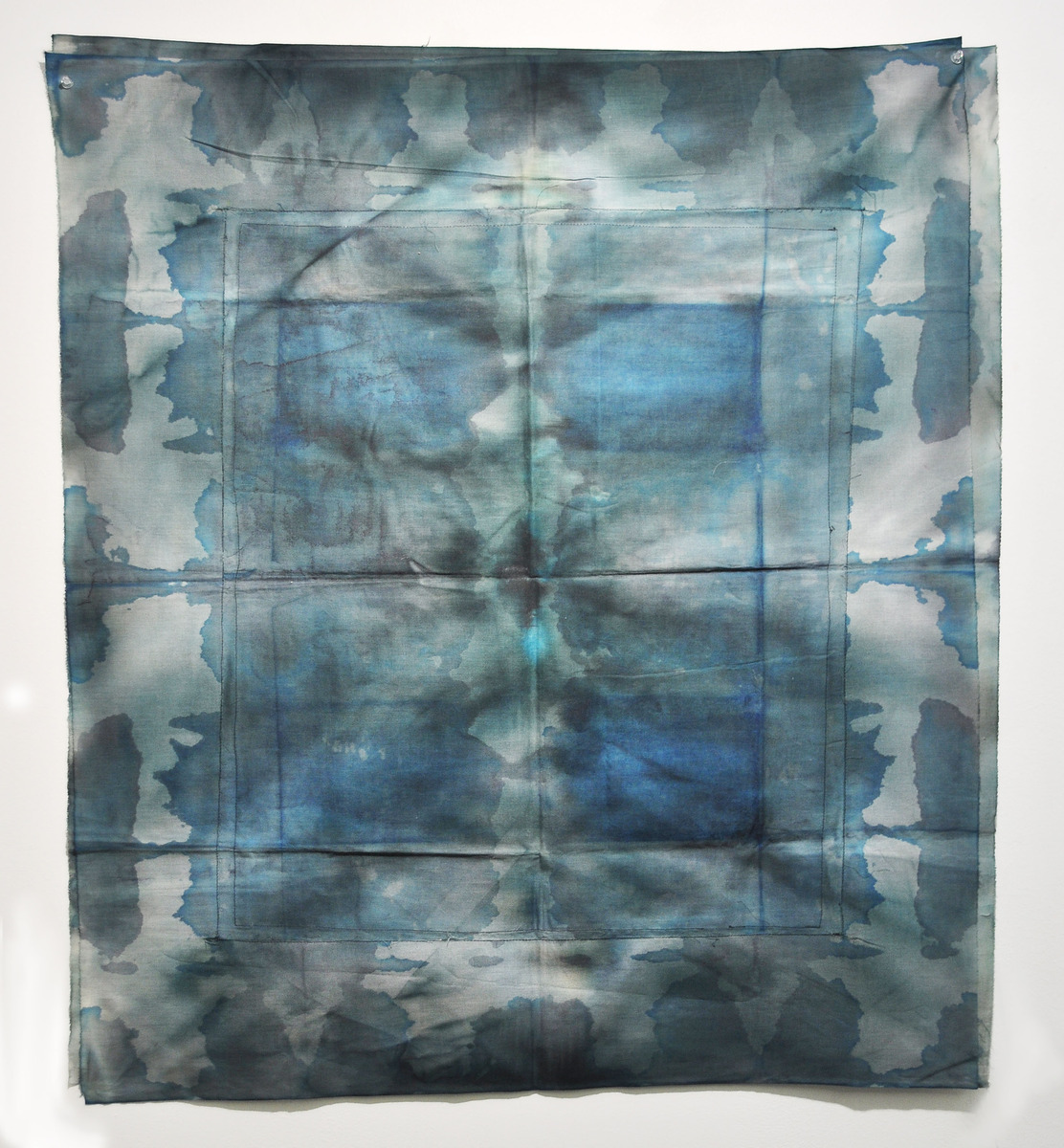 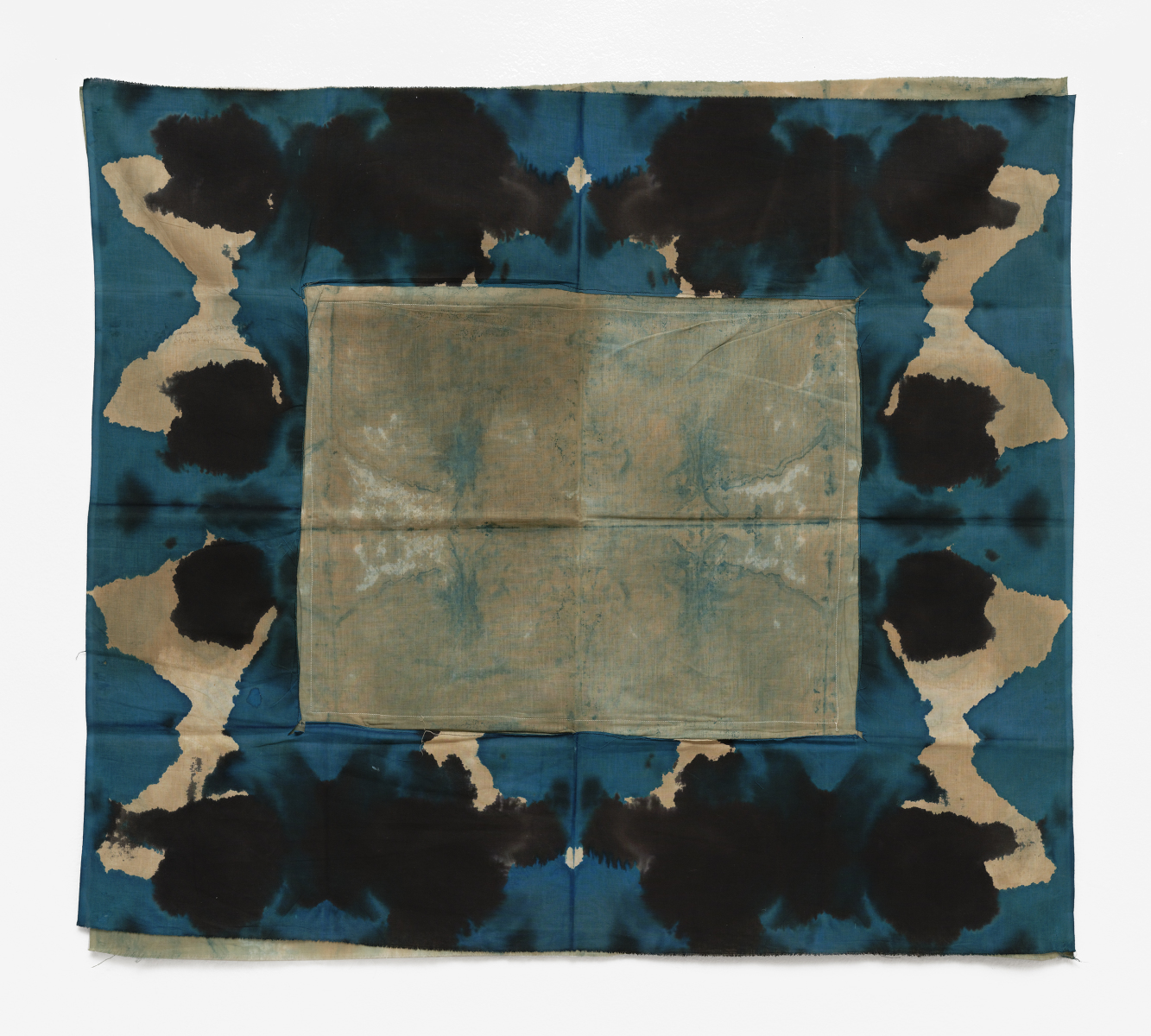 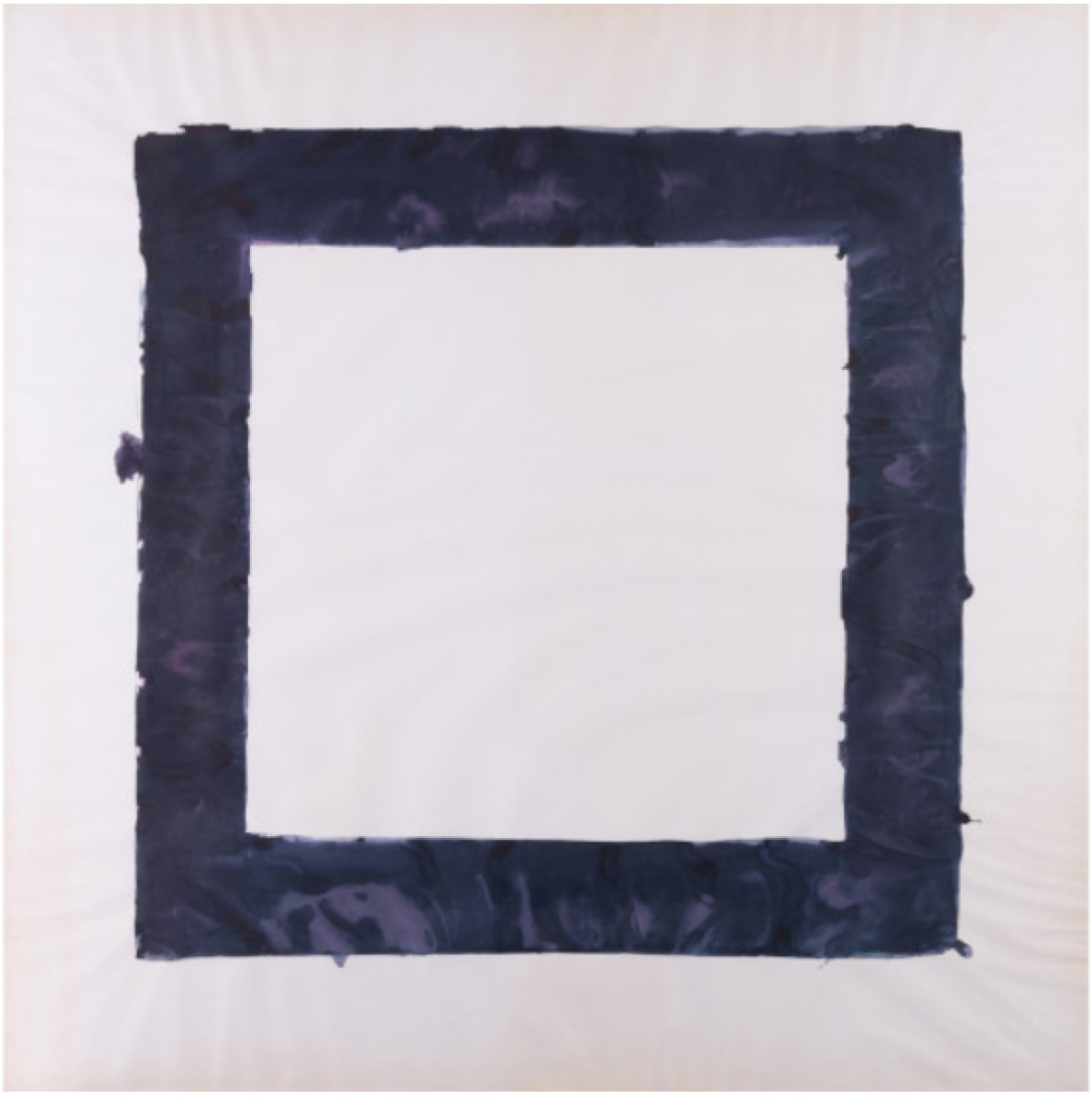 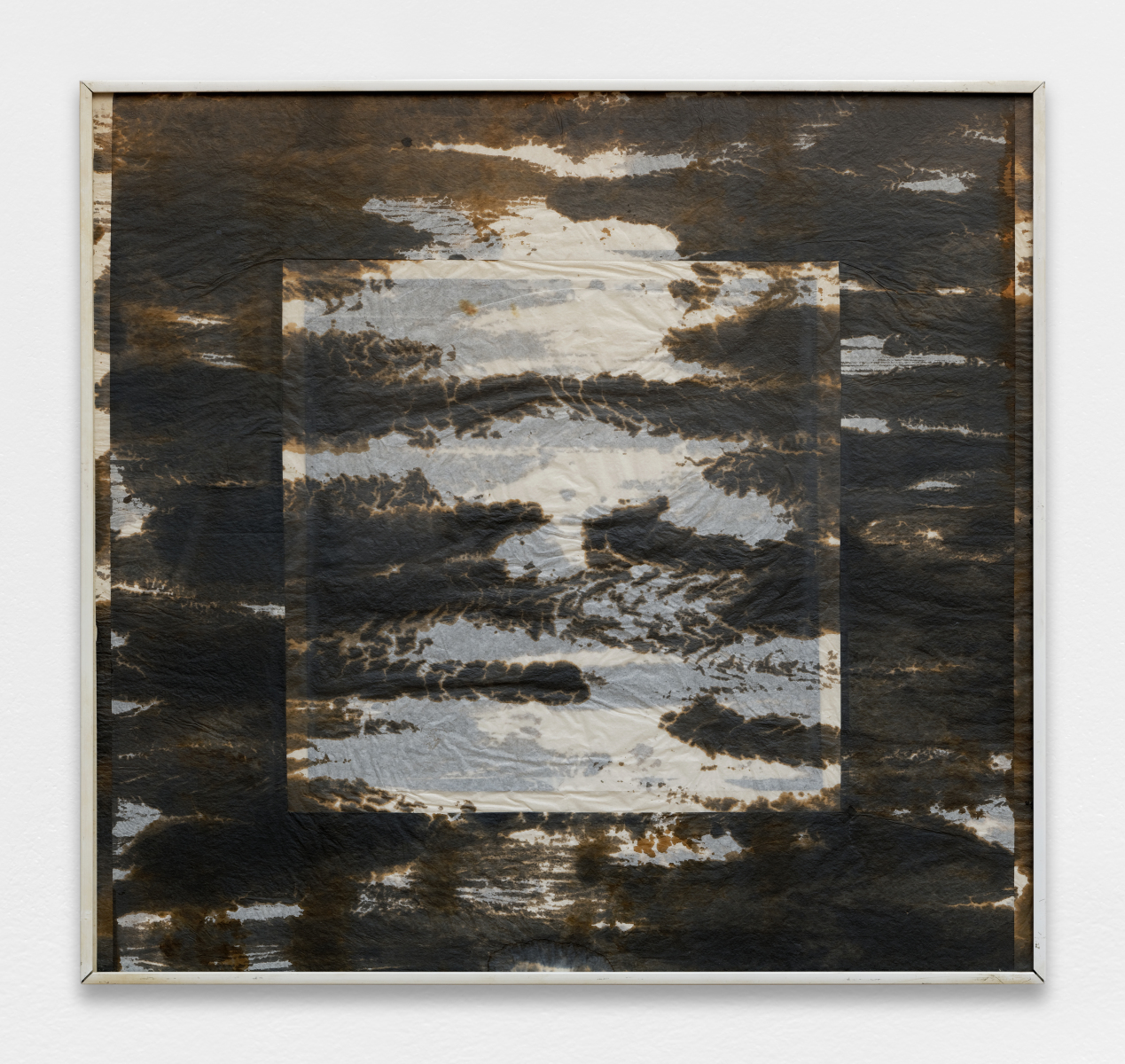 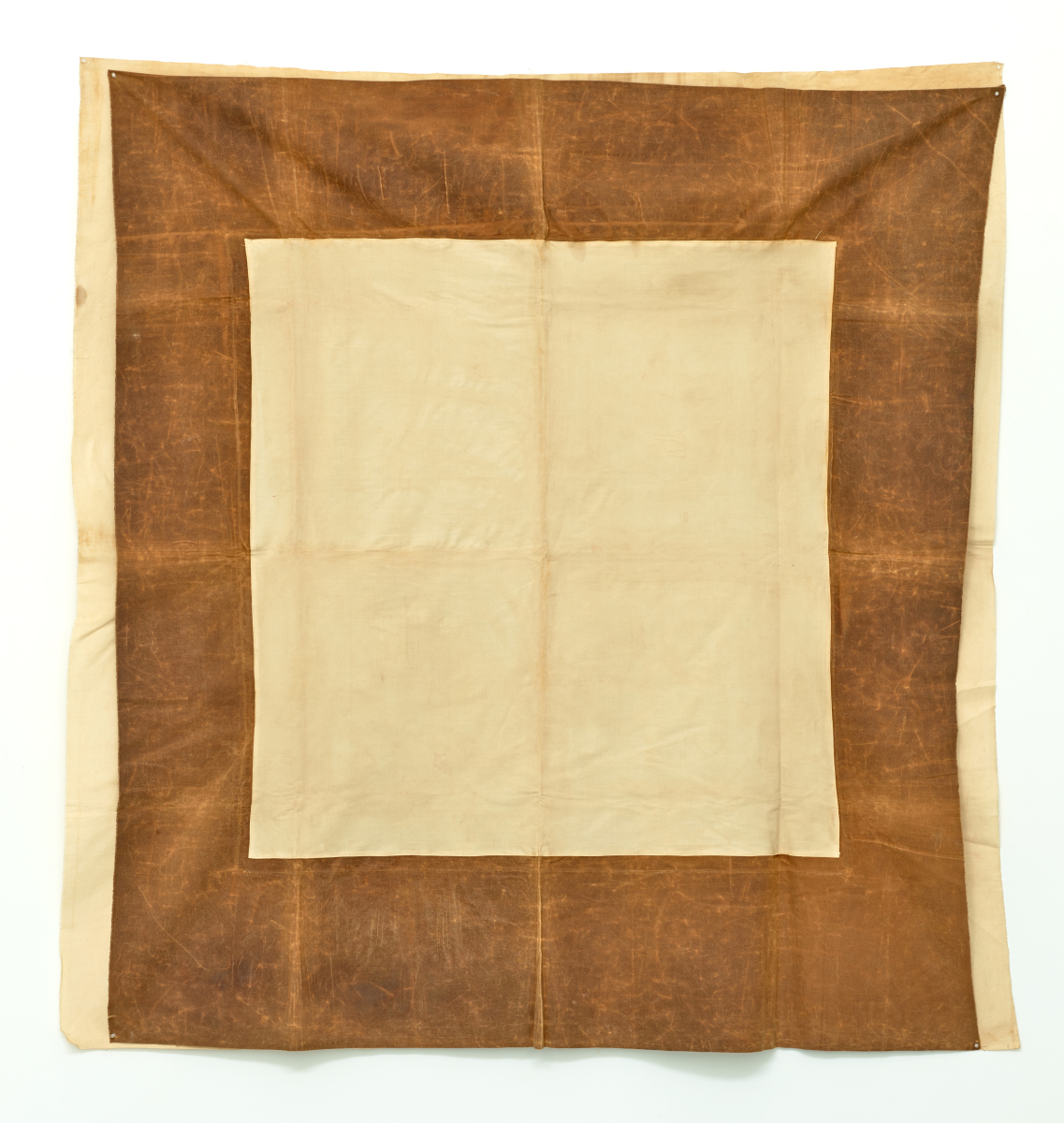 André Valensi (1947-1999) died in Lomé, Togo, destitute and alone. His Objets d'analyse, which are simple cords, ladders or nets, are made by braiding and knotting various ropes painted in yellow, orange and blue. He cut forms from corrugated cardboard and linked with a single cord, or simply piled them up. Some of these objects can be read as symbolic materials, charged with the artist's experience. The square canvases, assembled from pieces of cloth that are sewn together by stitches which deliminate a square motif at the center of the canvas. Then they are dipped in carbonyl. They show one way that painting after Malevitch can continue to address modernity.

André Valensi (1947-1999) confounded peers, critics and collectors equally. It was common in the heyday of the Supports/Surfaces moment to evoke the man's angelic face and wicked temperament with the descriptive dichotomy « ange ou démon ». The work lives on to embody another more pertinent duality. His Mandala drawings, his tondo series from 1976 titled Cercles Centre Vide, and his interest in psychedelic drugs suggest an epithet that opens the door to perception. As an art maker, André Valensi is a Transformer, able creator, destroyer, revealer and concealer of all that is.

Valensi's square paintings are assembled always from two pieces of canvas, to which he applies stain, not paint, with an upholsterer's brush. His process involves cutting a square piece from the middle of one of the canvases and stitching it by hand to the middle of the other; then similarly sewing the frame-like eviscerated canvas to the one that remained whole. He explains the procedure: « the aspect of the painting that traditionally made up “the background” now finds itself on the surface. All I have left to do is to measure the pervasiveness of color and its effects. Considering that my starting point is an idealistic problematic, the canvas’ double thickness ought to be the appropriate experimental material for such work. » Ambiguity and paradox are at the heart of this problematic. The seams hide the traces of cutting, enabling that which was revealed to be concealed anew, so that a painting is created from the canvas that was destroyed.

For Valensi, as any other seriously modern artist working in the latter half of the 20th century, making advanced art meant repudiating its decorative use, as well as any illustrative function it might serve for religious, philosophical, or moral purpose. Hence an unconditional commitment to abstraction, despite his belief that making art anchored only by its own point of reference would be an unacceptable concession. Valensi found a solution in using color to challenge the limits of the picture plane. He questioned its valence, called attention to its surface, repositioning it back to front, obverse and reverse. In this search for some kind of pictorial absolute, visual illusion is created and denied. It is a rarefied experience, though not necessarily a solitary quest. The works invite the viewer to stop using the eye for mere seeing in order to experience the separation of the mundane from the spiritual, to acquire visual knowledge of the ineffable.

In the paintings as well as the objects, color seeps through, covers or overlaps, and sometimes reveals the surface on which it is deployed. Valensi's Objets d’analyse, which are simple ropes, ladders or nets, are made by braiding and knotting, tying and interlacing-- never weaving-- various textile strands painted in bright colors that never appear in the paintings. The color may be localized in the folds of the waxed string, or trickle along knotted protuberances. Colored slices of corrugated cardboard become formalized when linked with a single rope, or assembled in a pile. These creations, call them sculptures if you wish, are charged with the artist’s experience. Valensi is not against interpreting them as symbolic objects, for he considers them « the development, the inventory, the indexing of everything the subject invests in the process such as psychological repression, neurosis, etc. This work in spite of, or rather with its Freudian character, functions as a true abreaction. »

In the interview in which Valensi allows for this psychoanalytic interpretation of his work, Valensi defines abreaction as a term for reliving an experience in order to purge it of its emotional excesses. It is this type of catharsis that propels Valensi's work from the realm of experiment to that of creation.