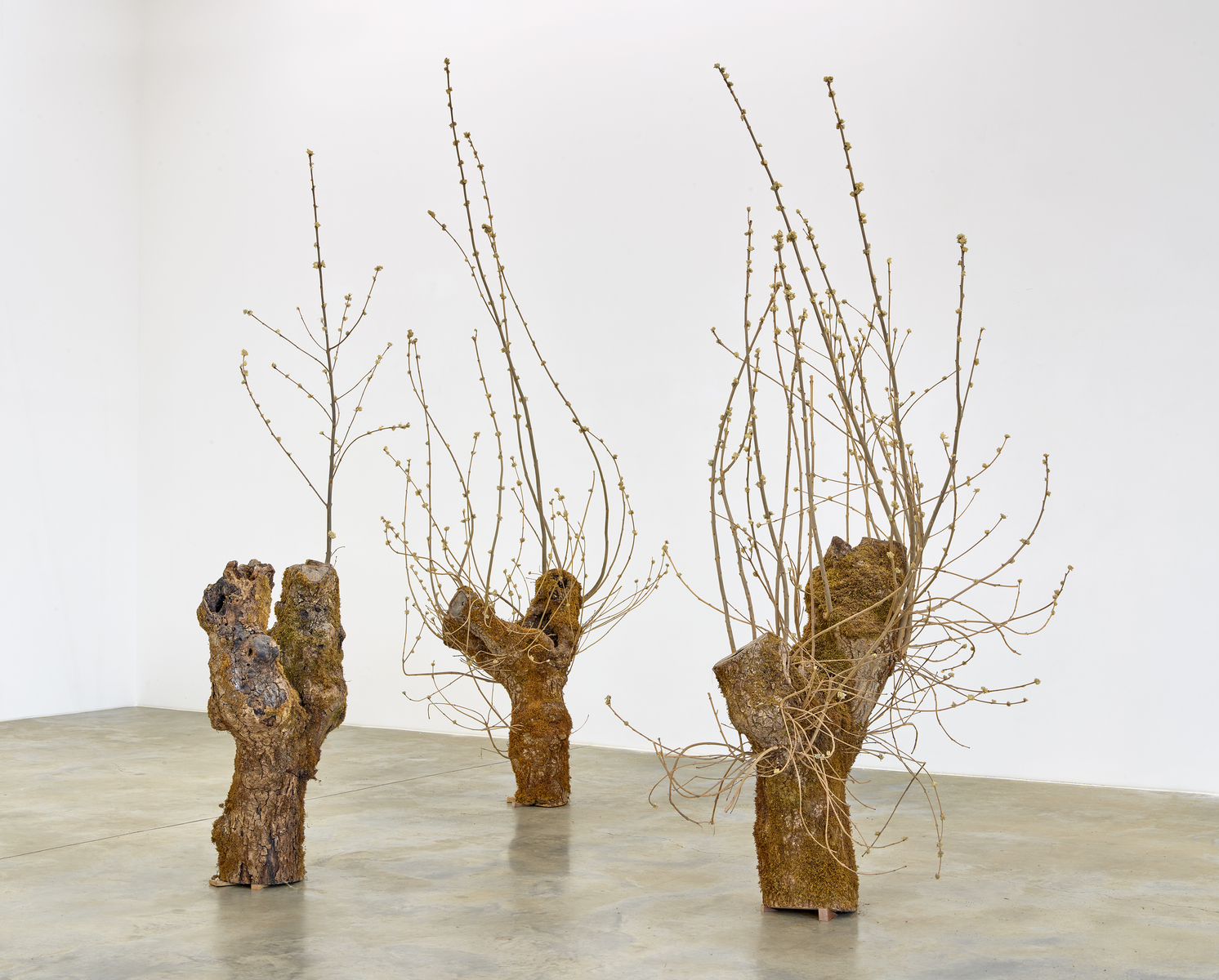 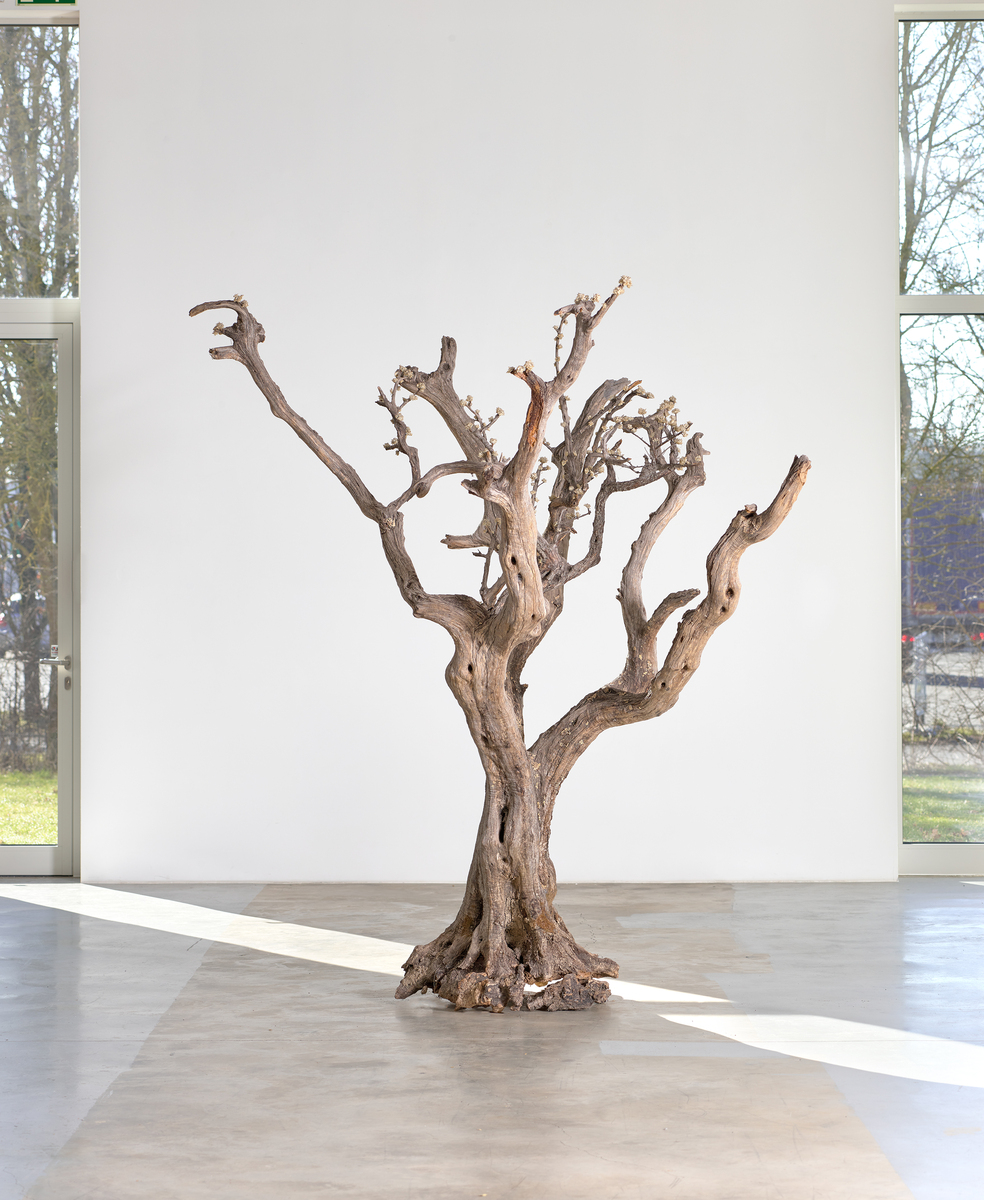 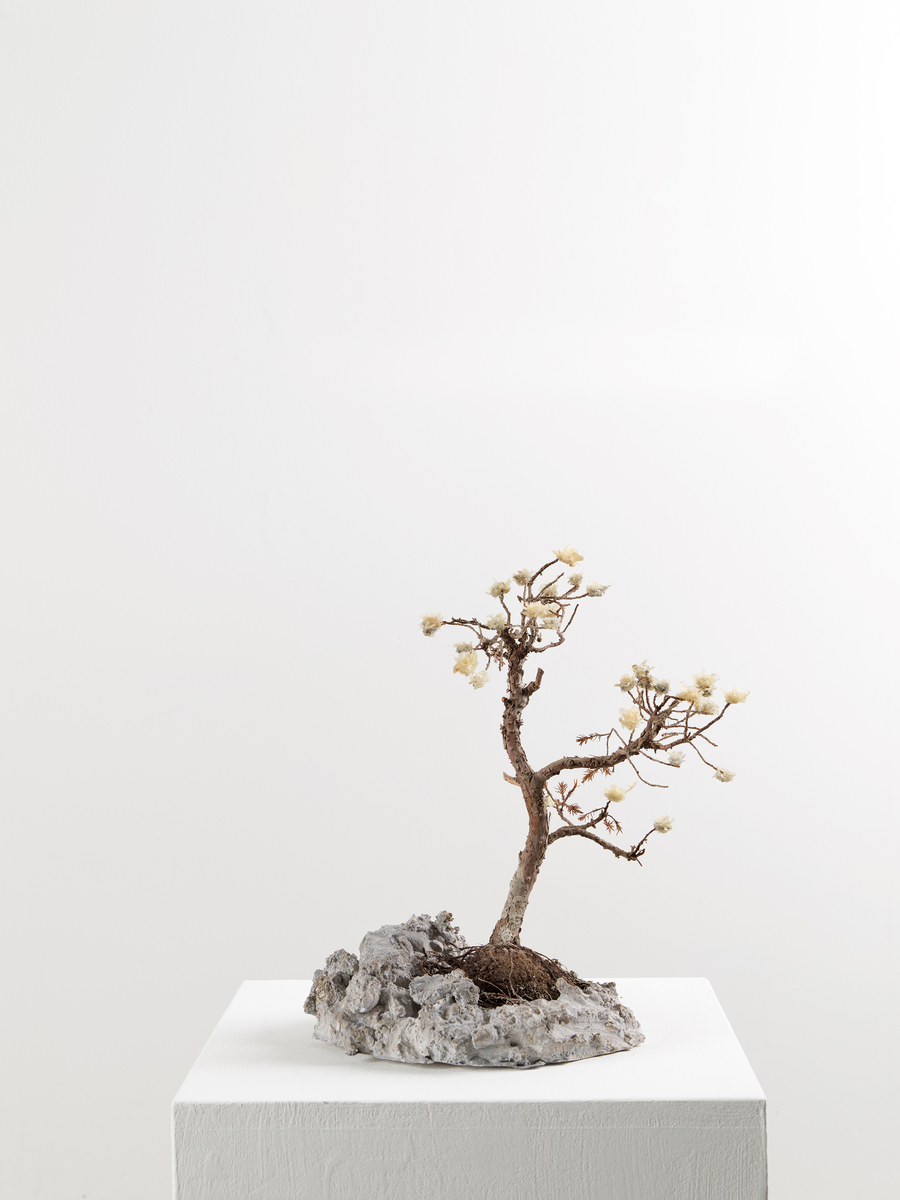 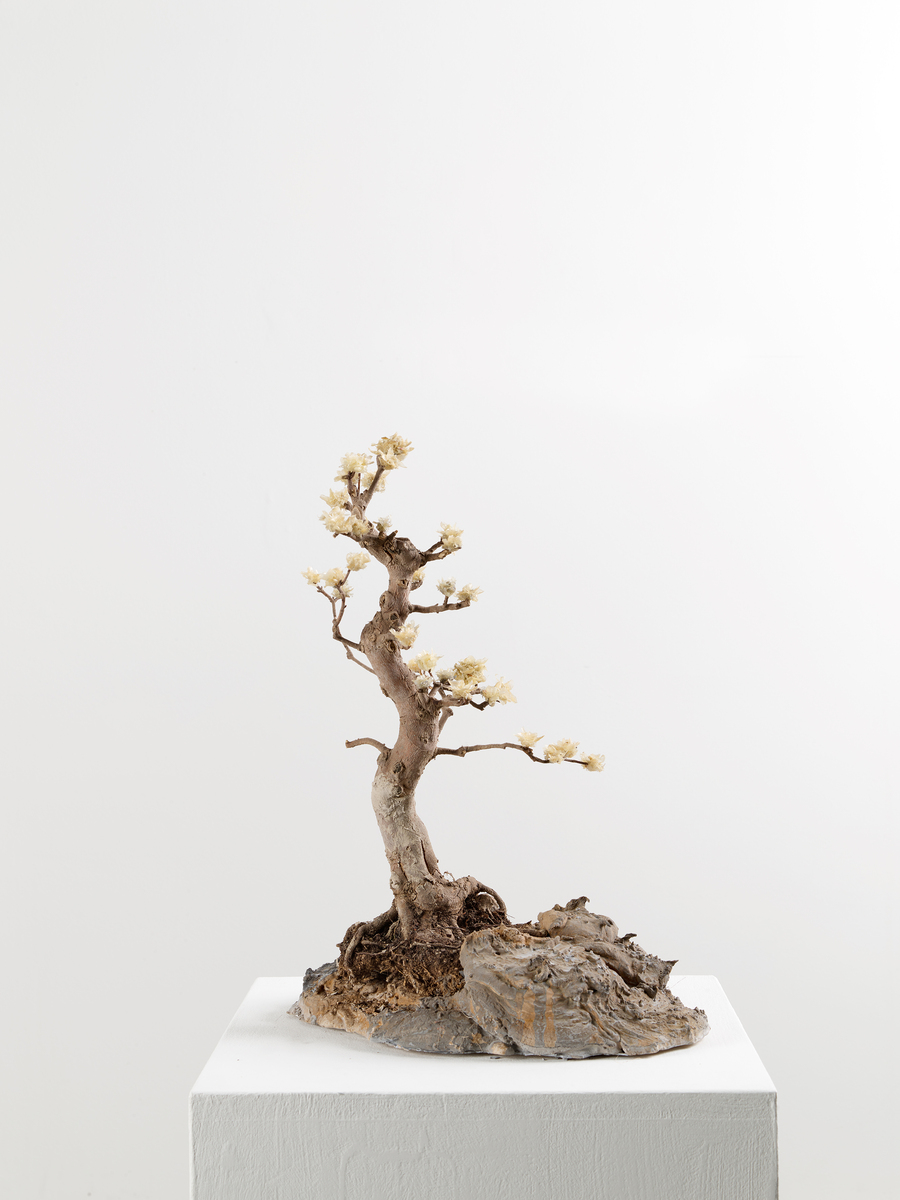 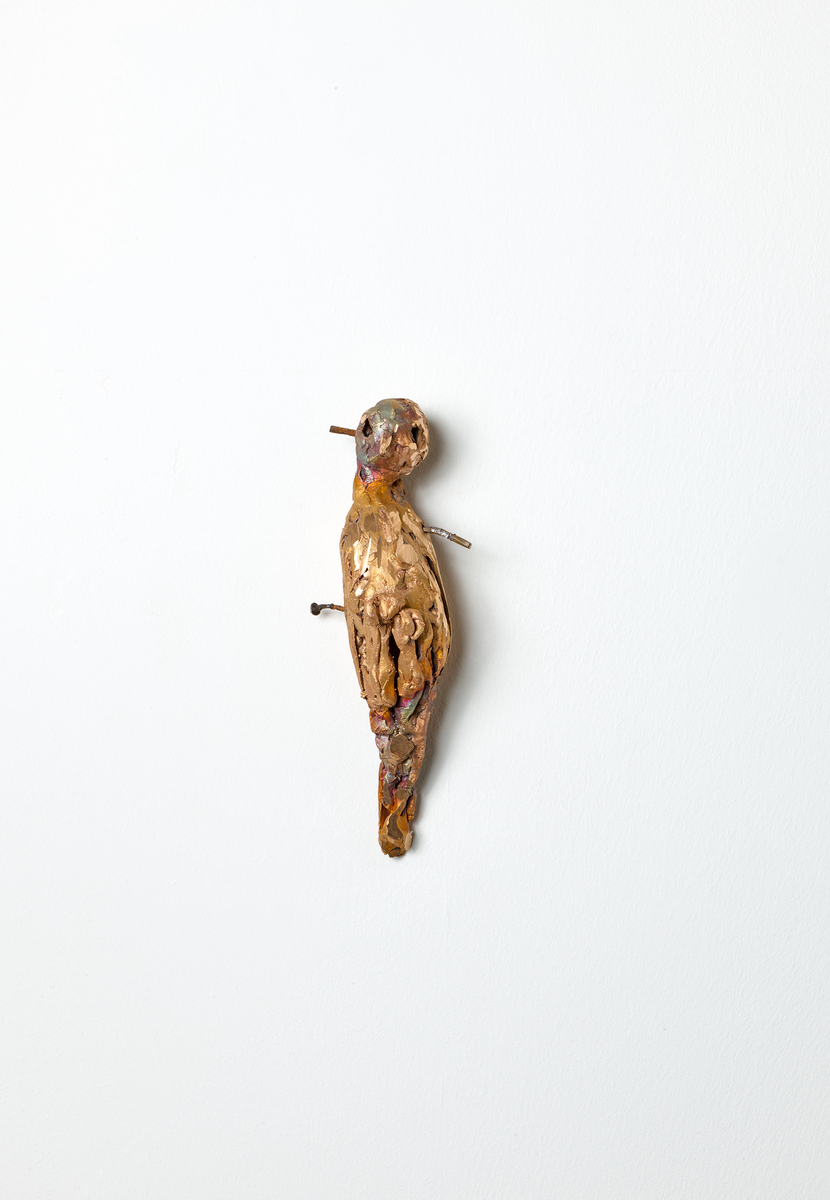 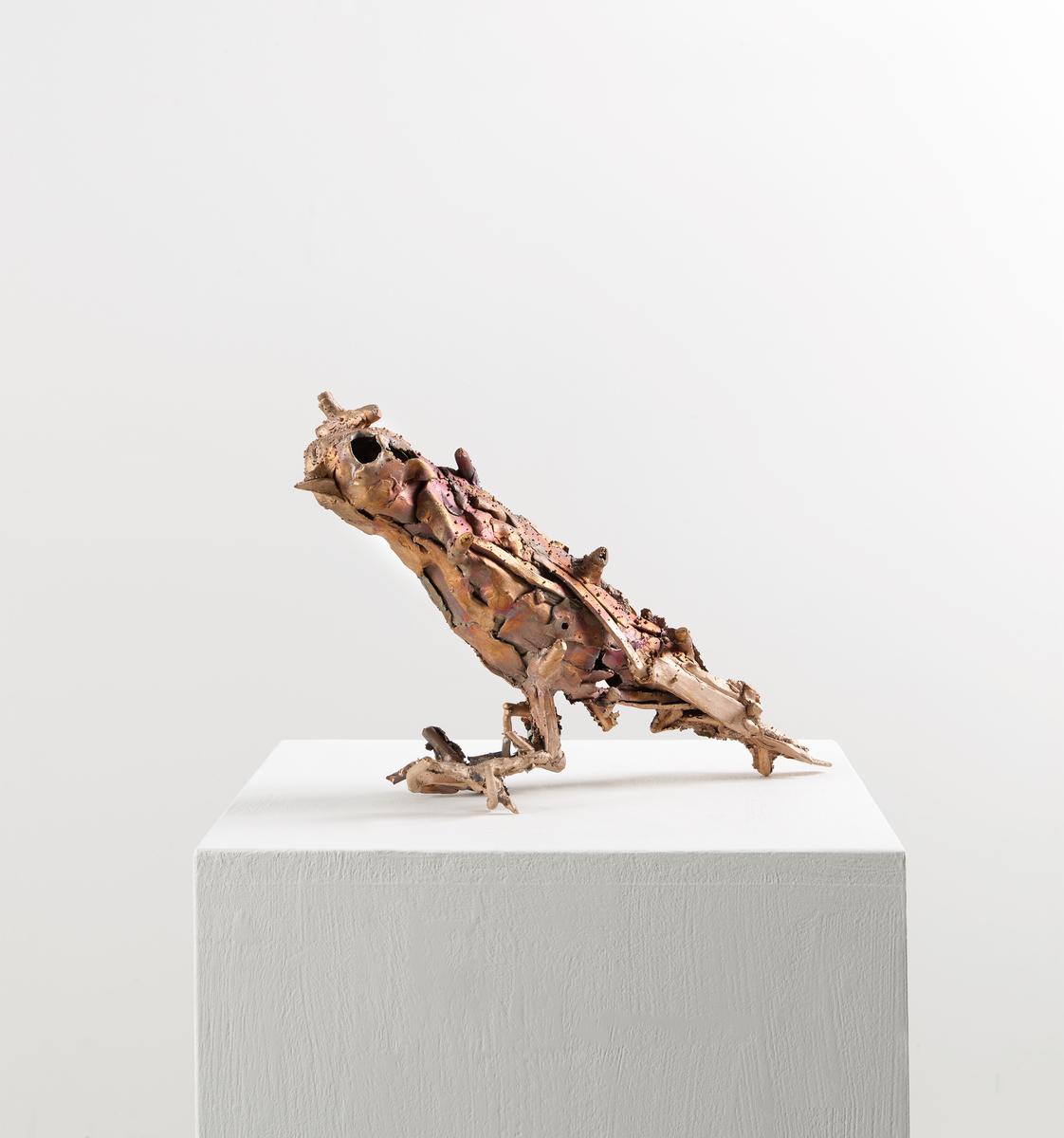 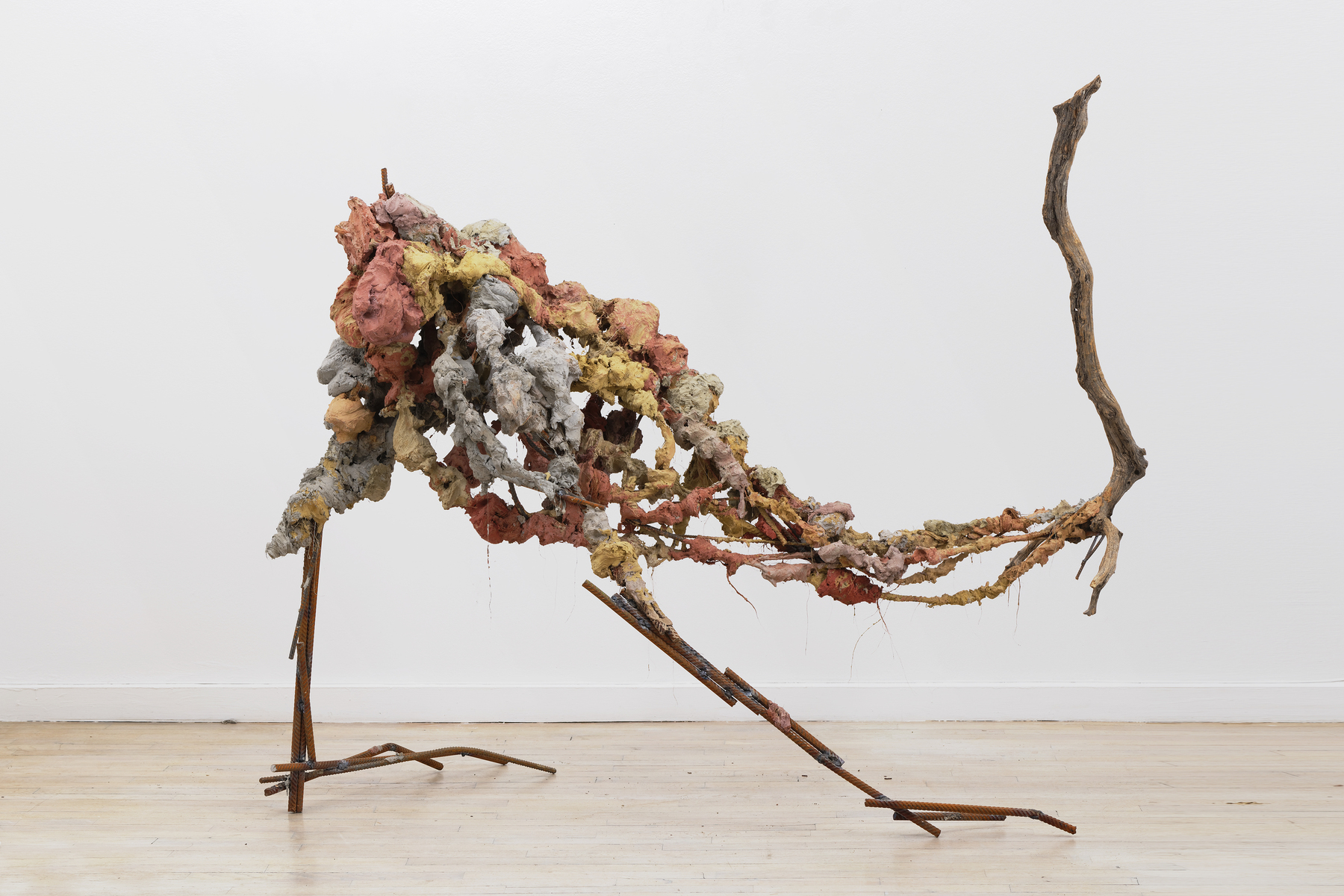 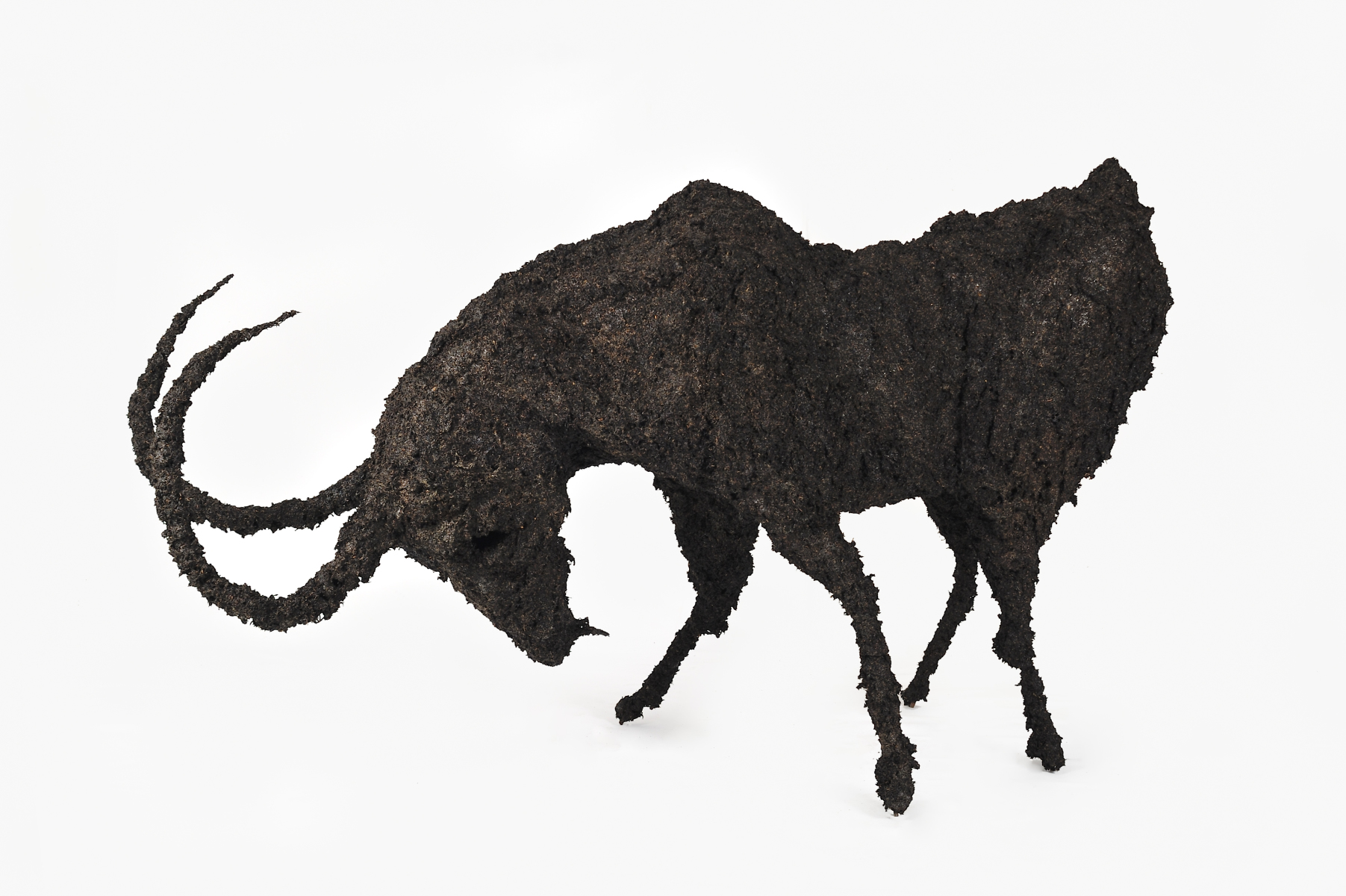 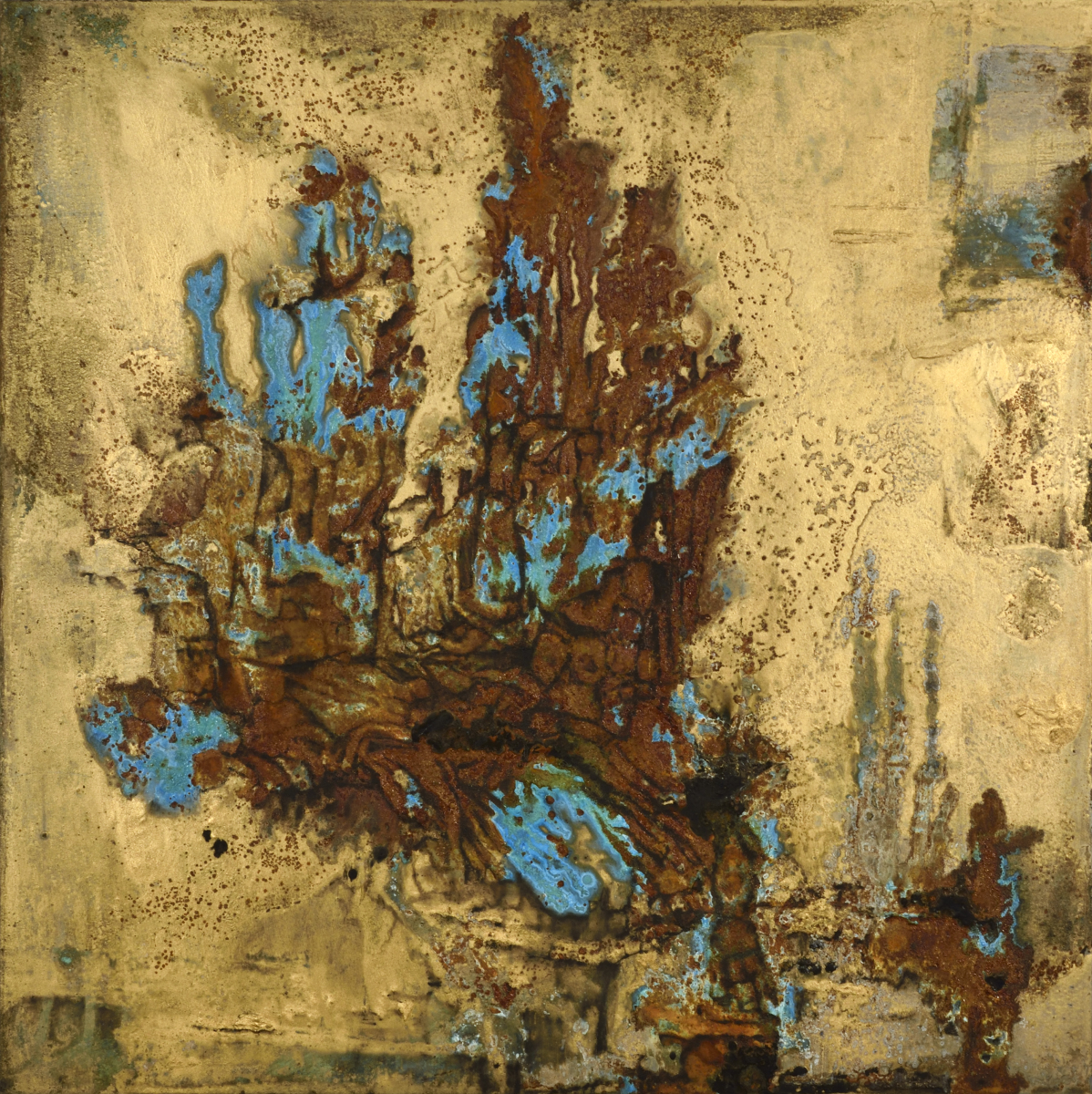 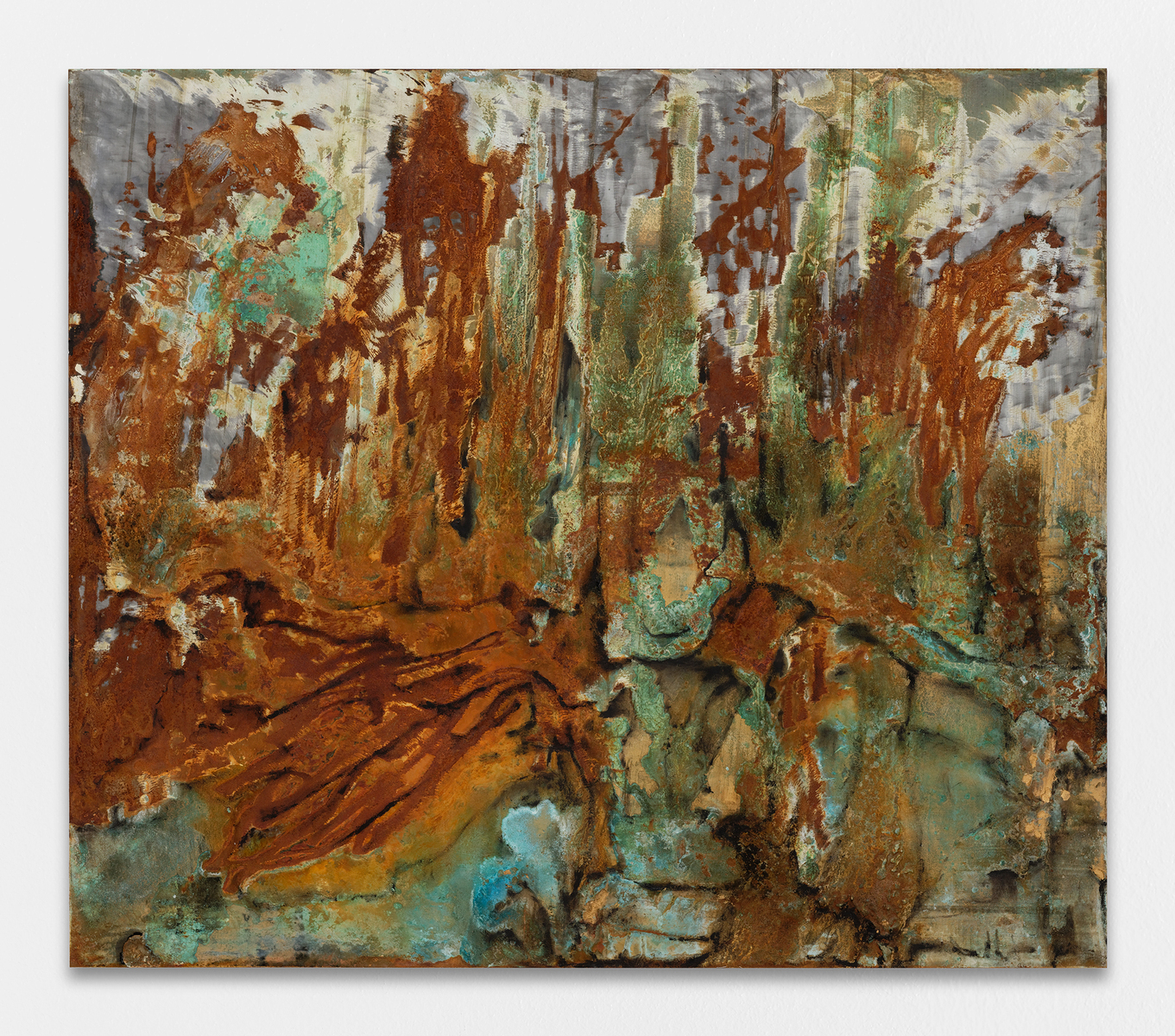 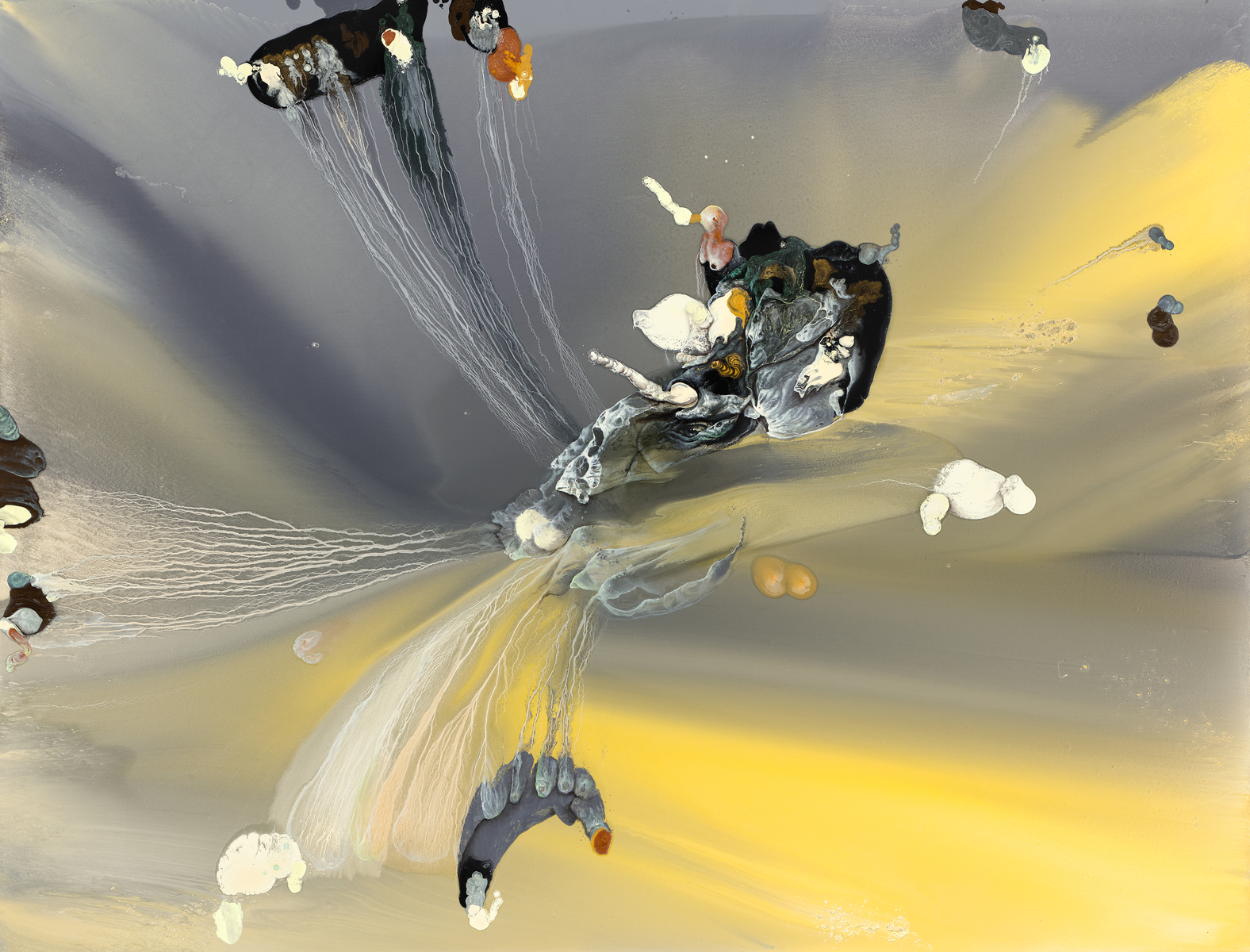 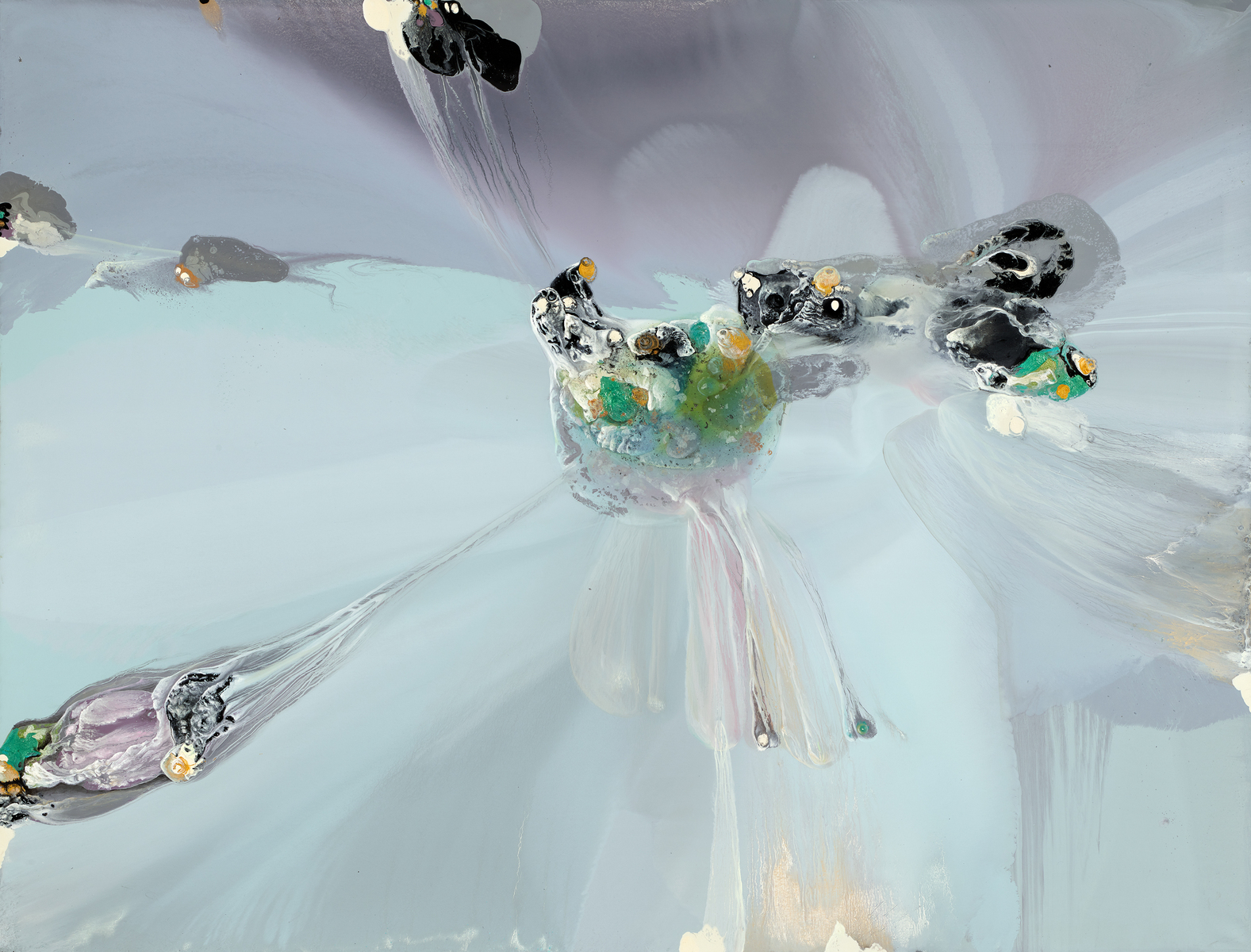 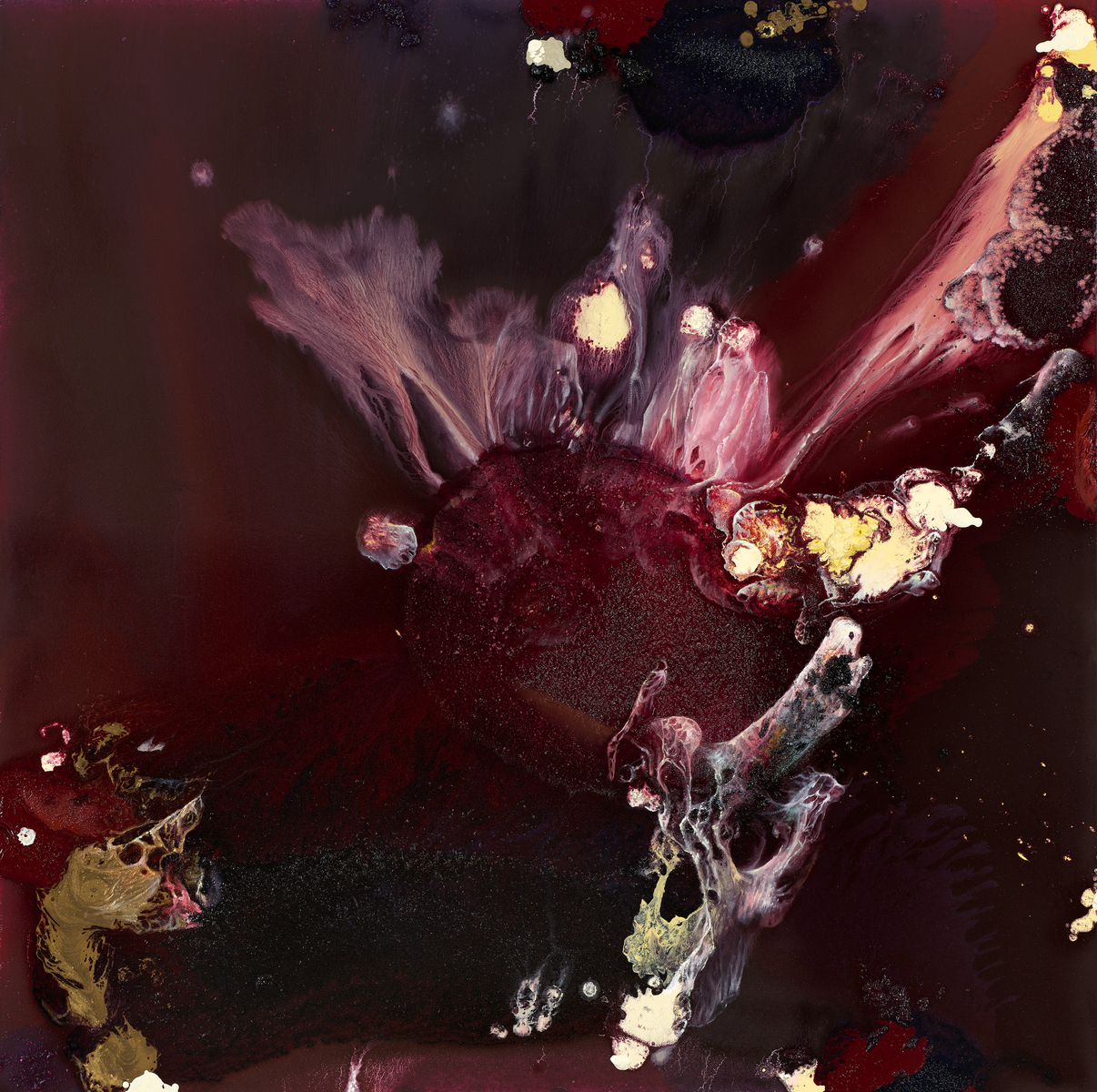 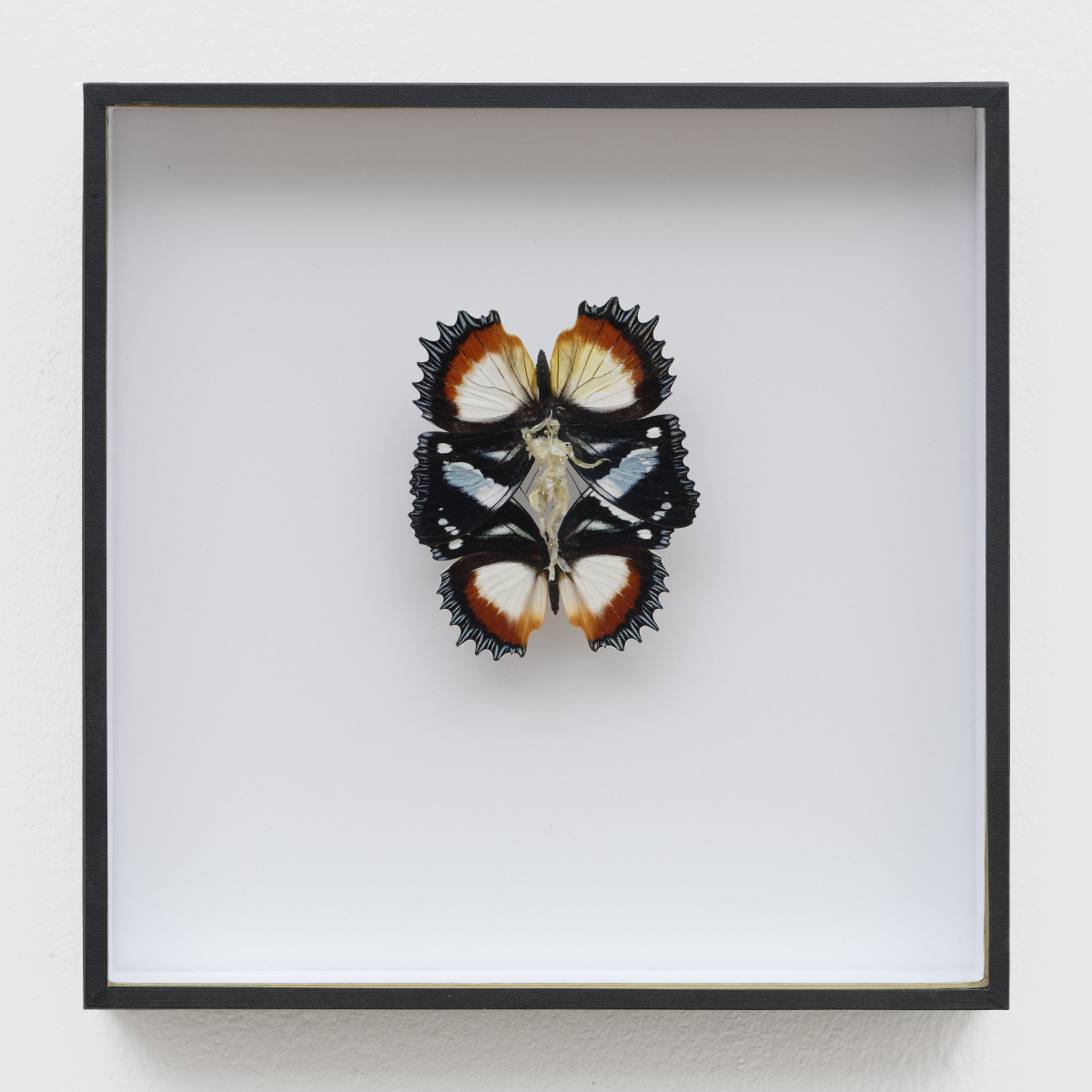 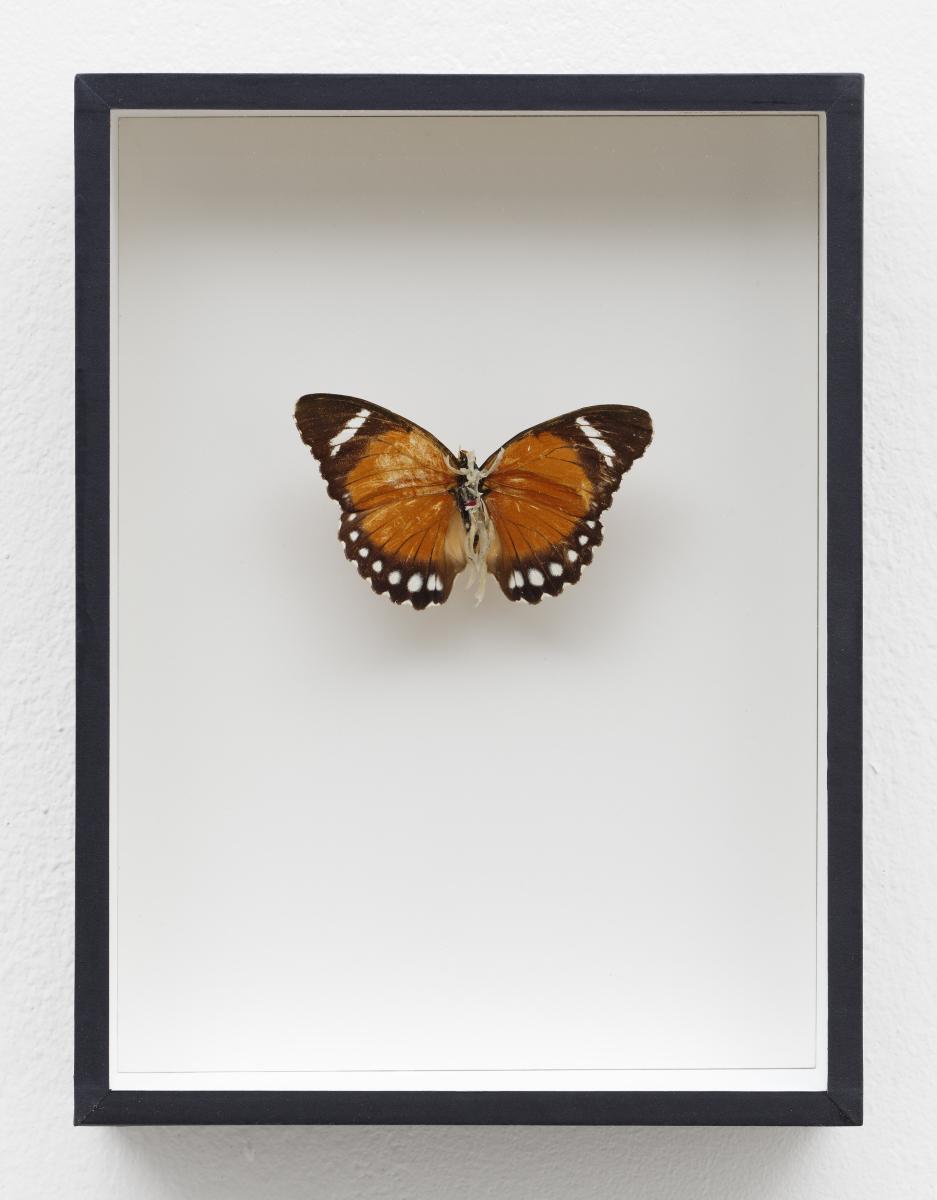 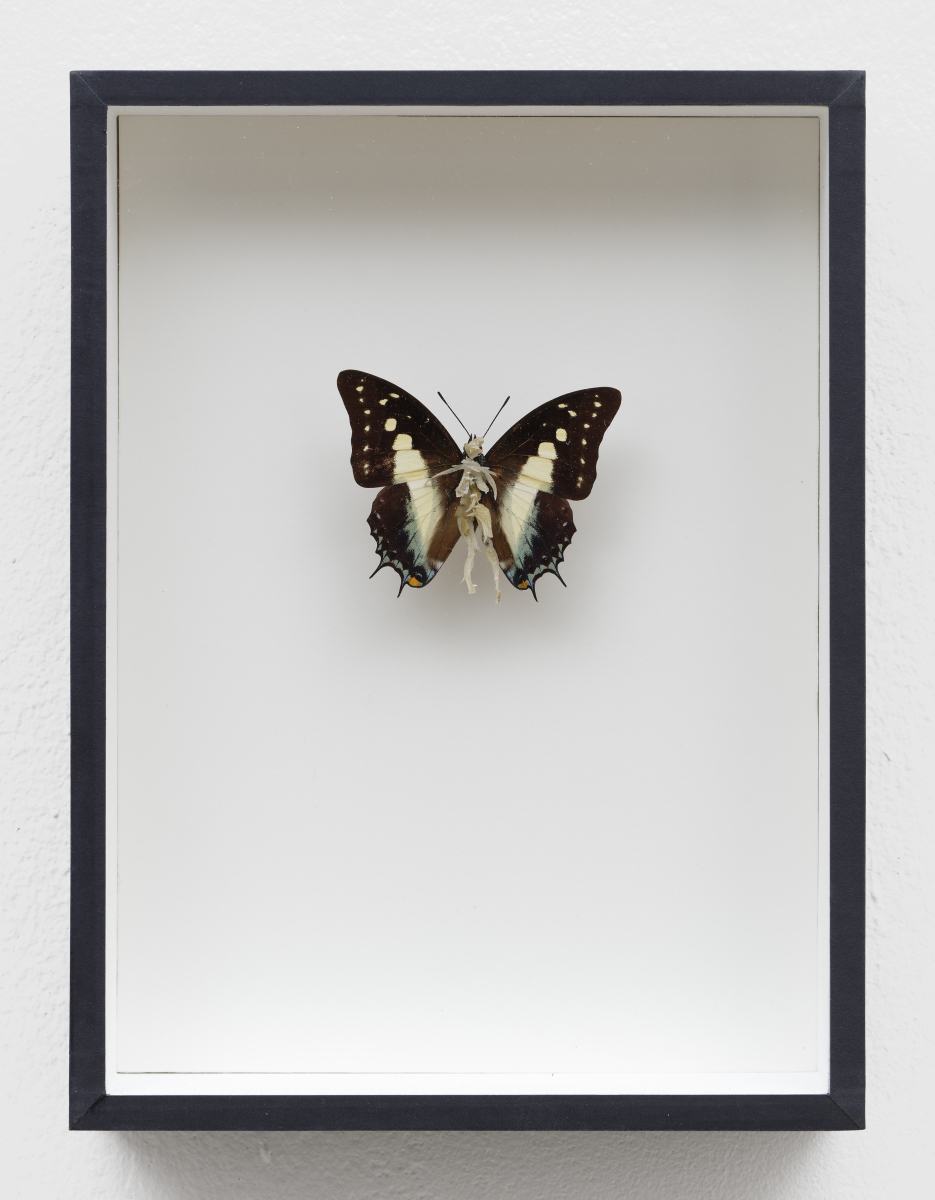 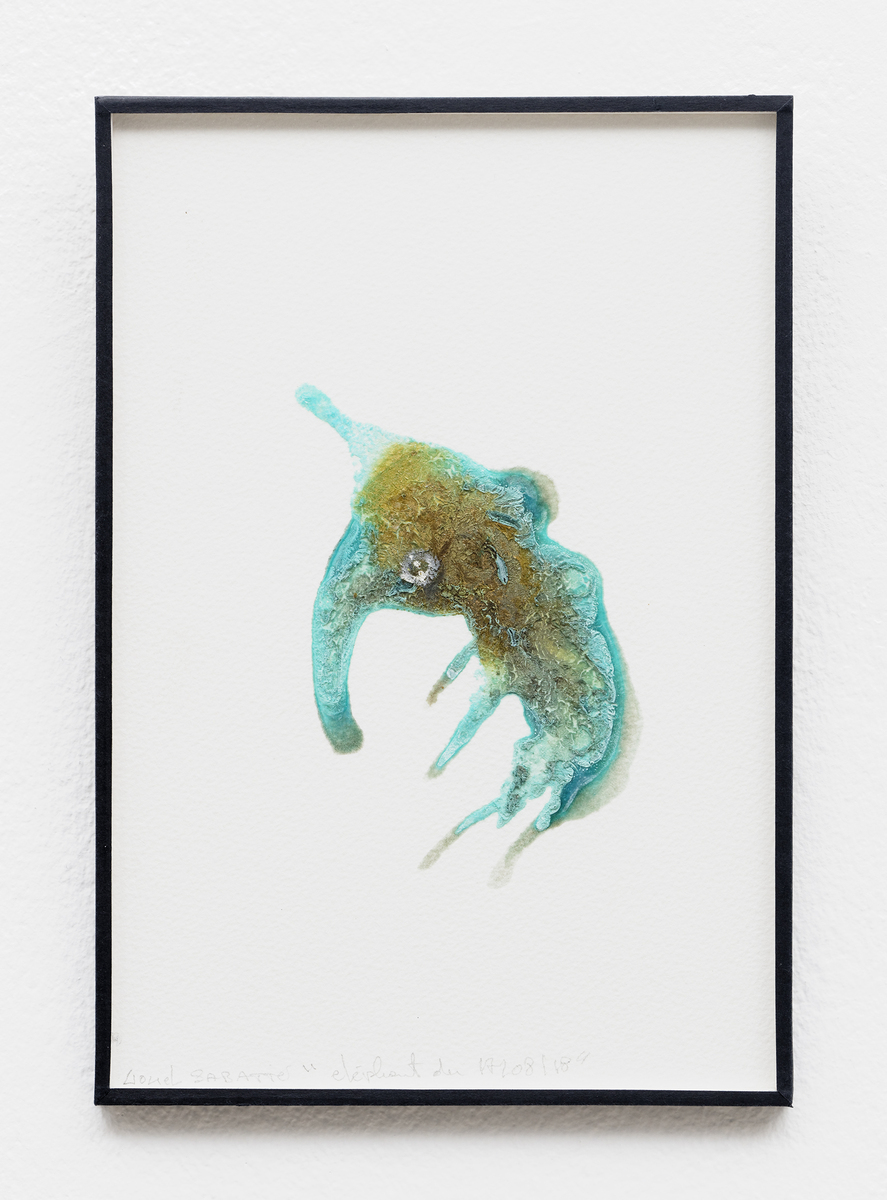 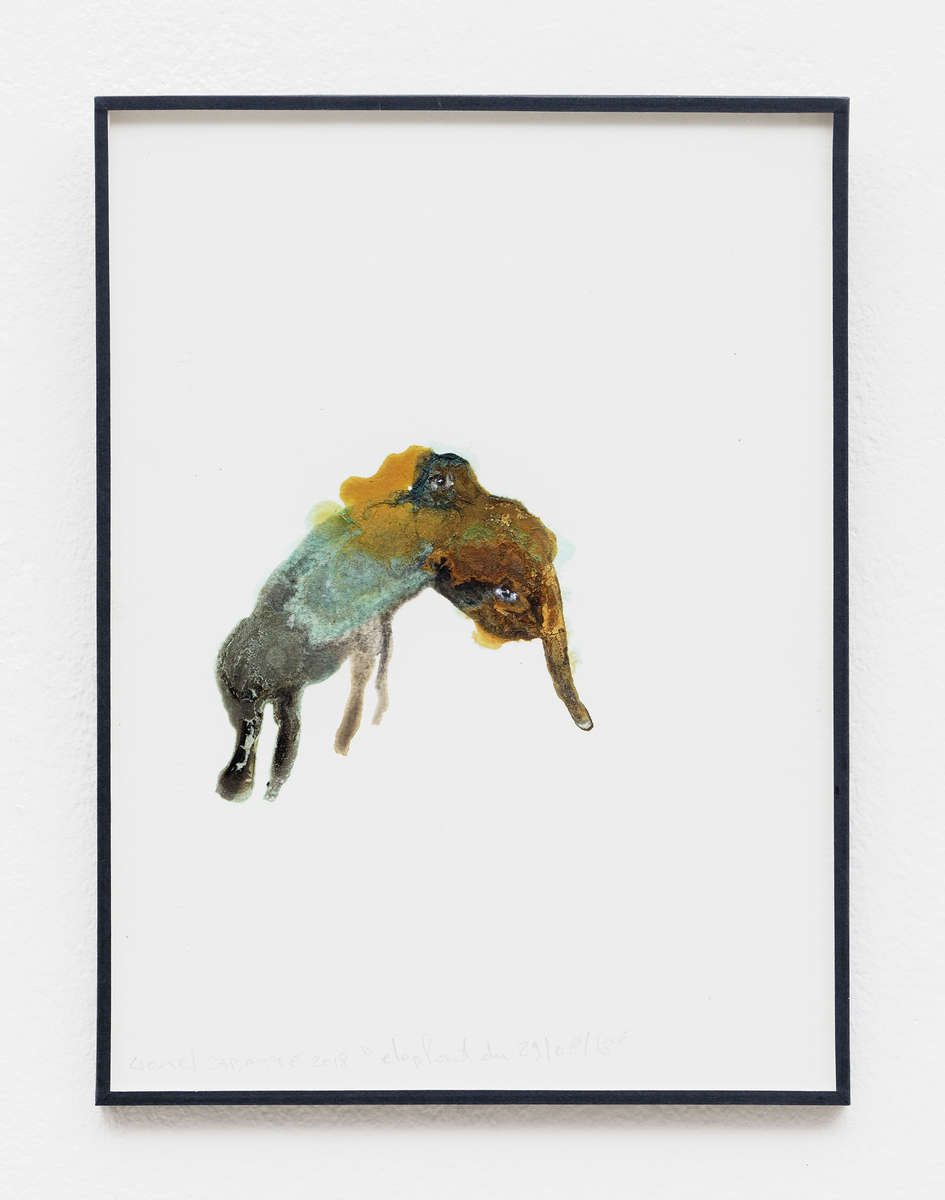 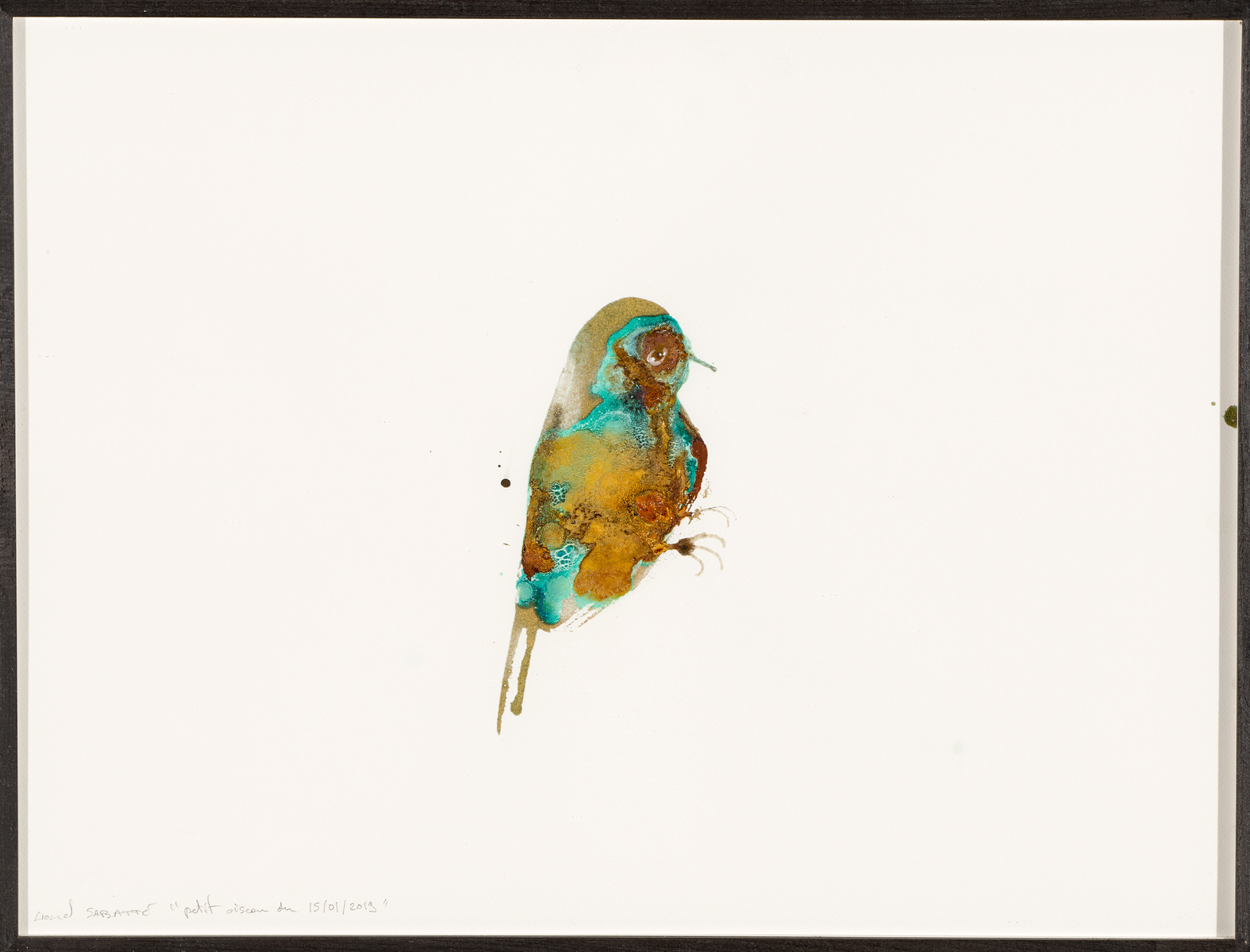 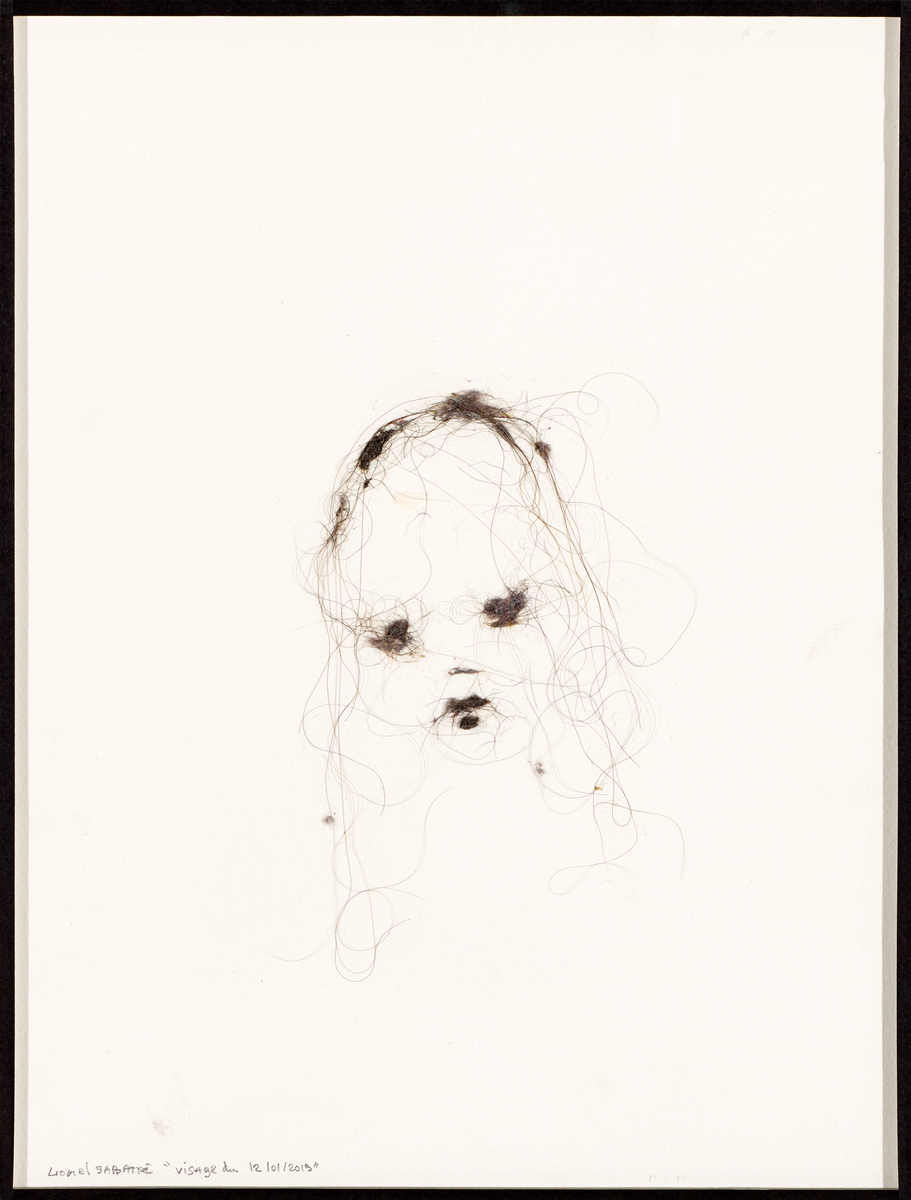 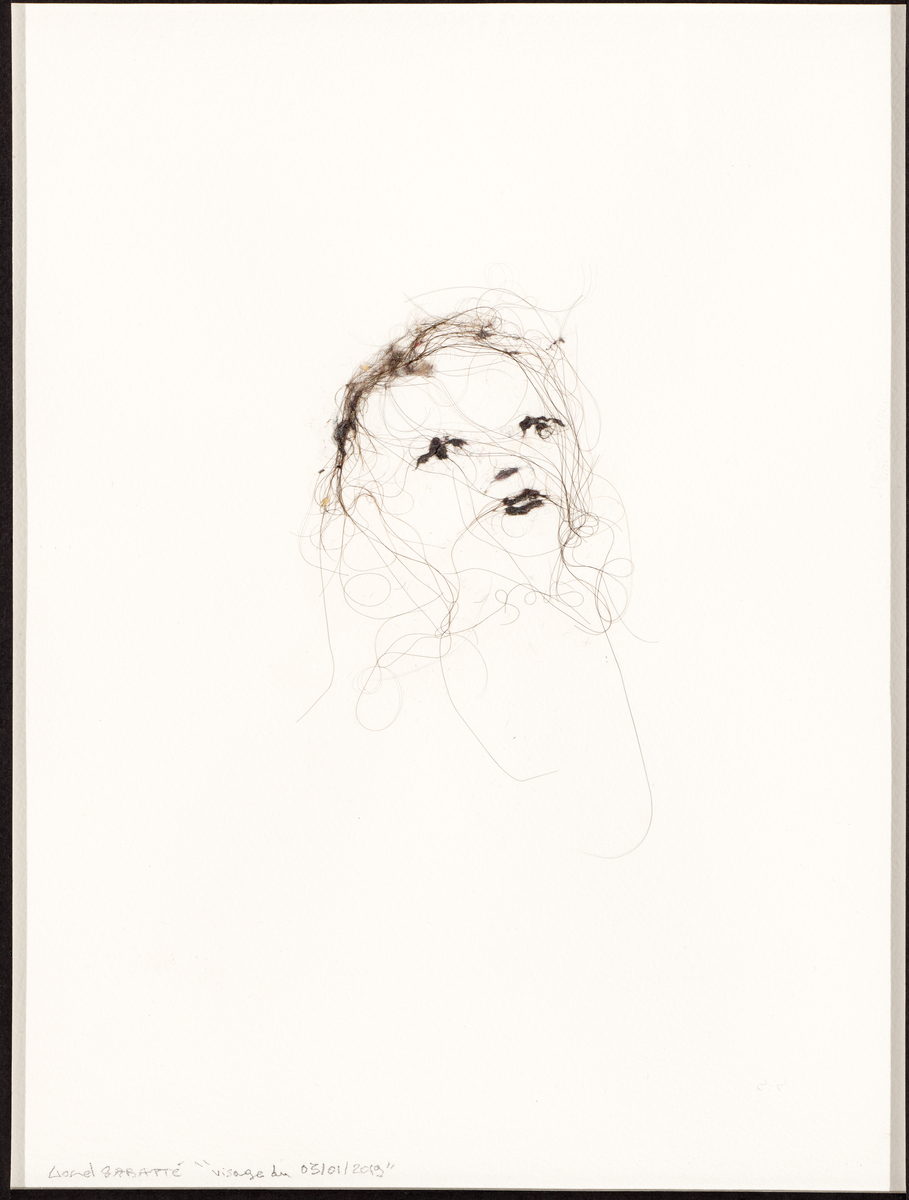 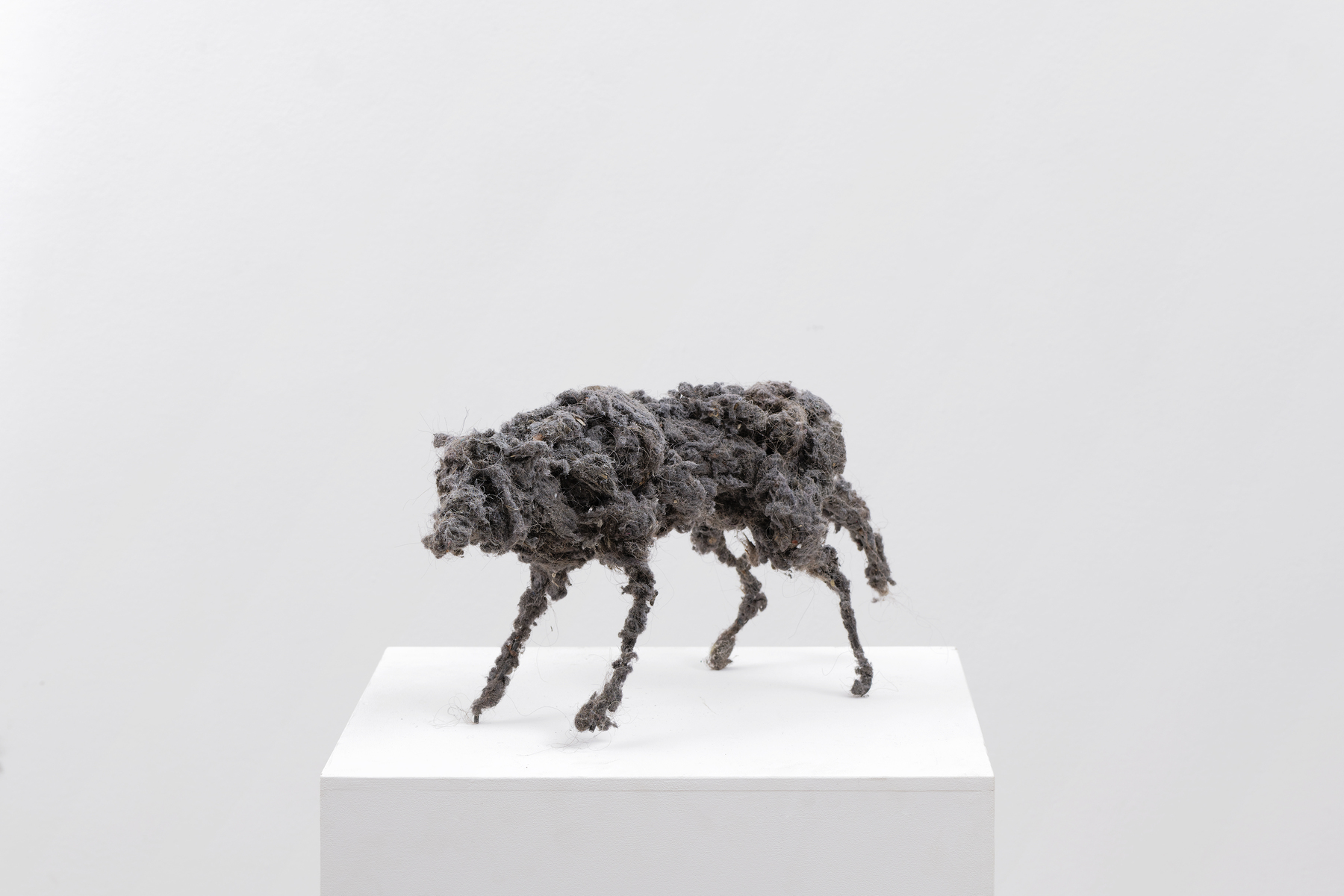 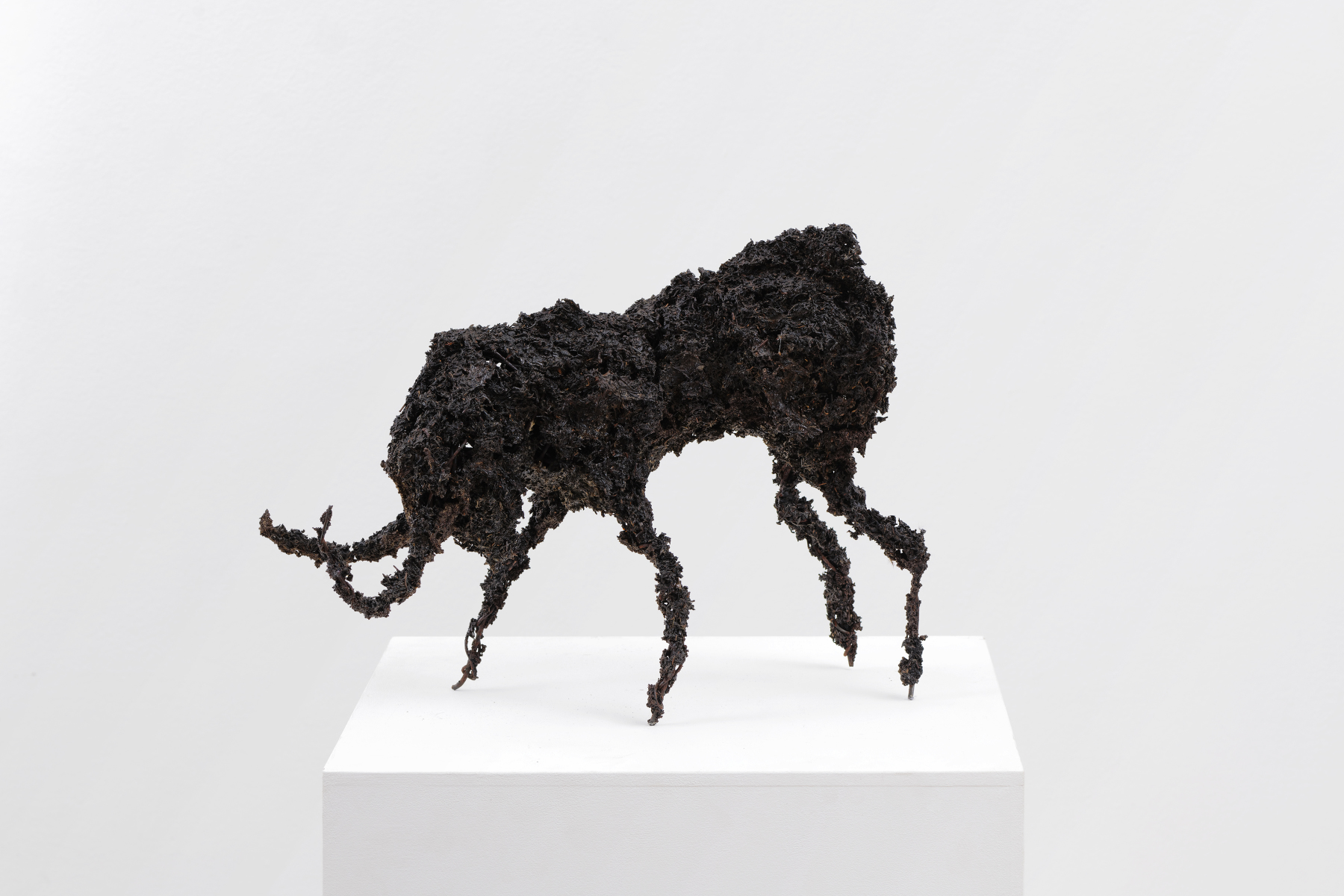 Born in 1975 in Toulouse, France
Lives and works in Paris, France and Los Angeles, USA


Sabatté’s activist recycling is not just an ecological and environmental concern. We might venture a saving “leap”. This recycling perhaps testifies to a game of solicitude for the survival of the living, of the expectation of a leap forward in the hoped-for escape from a relentless and inexorable existential condition, which can no longer be categorised in simply “humanistic” terms since the war. The collection of “fluff balls” undertaken at the Châtelet station, the gluing of the dead skins taken from the pedicures in order to join them with scrap, with wood, with cement, with dead trees, recalls the industry of the ragpickers of the past and the gleaning done by children and women in hills and mountains of garbage in Africa and Asia to find things to eat, trade, sell, in order to survive. The ragpicker evoked by Baudelaire, this “most provocative figure of human misery” according to Benjamin, is someone who picks everything: “old paper, corks, bones, cardboard trimmings, nails, broken glass, dead cats and dead thrown on the public road in violation of regulations, hair; in a word, anything that can be sold”. In the piles of garbage, refuse, residues, waste, Victor Hugo detected “a meadow in bloom”, green grass, life. The works of Sabatté go through all these registers and make us hear – as an echo – this comment by Benjamin, comparing the writer Sigfried Kracauer to this figure from the lumpenproletariat: “A ragpicker, in the early morning – in the dawn of the day of the revolution”.
This is how we have to see this game of shuttling between nature and culture that drifts away from any reflections on this central theme of Western thought, while accepting to address them. No text founds or establishes these forms, these figures and the fables they embody and propagate. And the presence of tea or flowering bonsai with dried-up skin does not “naturally” lead to the thoughts of this elsewhere, this East that is often hoped-for as a saviour.
The life of forms as it was, since the Chauvet cave, is undone; is it, to quote Yves Bonnefoi, without hope? It fades in accordance with the laws of entropy, in the very manifestation of the resumptions dared by Sabatté. They are in the world that is his, a replica in waste, filth, dust which he organises into systemic aggregations and in configurations that are no longer assemblies but constellations of particles adaptable to all species whose biochemistry and biogenetics ensure not proliferation, but evolutions that change forever our ethical understanding of what is human, culture and nature. This is evidenced by these faces and bodies, born of dust, which we can imagine as swollen, ghostly forms delineated with a sharp line, that burn marks sometimes suggest are alive; as it was for the phoenix. But the infused tea may also be an active principle of regeneration as if salvation could be expected from the plant. It would then be a case of dispensing with the seductions of the colourings of metal plates in the thickness of which a deliberate oxidation – generating provoked readymades, weighable avatars of dust farms – diffuses a corrosive expansion producing appealing heaps of dust.

Everything has been said. And, especially in the beautiful texts by Ada Ackerman and Julien Verhaeghe. But, as with Leonardo so in Lionel Sabatté’s work it is in painting that the sometimes secret links are woven between the reigns of nature. And not only in the dirt of the walls, those surprising patches that subjugate our gaze and leading it to make formal speculations, in which the Florentine artist revelled, enriching our heritage of illusory images, but also meaningful representations. This is what André Chastel masterfully predicted.
The dry and austere manner that so seduced the artists – Tuscans as much as those of Ferrara – to the point even of affecting the positioning of the volumes by a kind of cropping that circumscribes them in the work of sculptors such as Guido Mazzoni and Niccolò dell’Arca, does not allow it. It is only a kind of demonstration of a skilful and superior craftsmanship. Even for Leonardo, in this primacy that the young Michelangelo granted to the “finished” nature of a firm and continuous line drawing. According to him, only painting had a divine character. It alone could soften the figures by this sfumato that could “animate” them in the atmosphere, the aria, of divine creation. By his mastery, the artist, the painter, could conceive, create, give birth to various species. Butterfly and bird drawings in bright, acidic colours stimulated by the corrosive action on the acrylic of solutions of oxidised iron and bronze provide appealing but disturbing paradigms. Before these drawings, one inevitably thinks of the birds of Audubon or Martinet, but for their part these illustrated the creative energy of a resolutely humanist Natura naturans.
For our part, we discover ourselves, seeing these drawings with their colours close to the iridescent, saturated and feverish like the colours favoured by Pontormo and Beccafumi and many other “Mannerist” artists, faced with an ambiguous strangeness that was both morbid and vitalist while waiting for the destiny of dice thrown to the hazards of chance. But the formal beauty of these works, like that of those faces and bodies oozing dust, coagulating in the effects of their breeding, “a trace of initially imperceptible lines”, leaves a hovering hope of successful recycling in this subterranean soil in which Marcel Duchamp delved.
This is the power of painting and style. Can we say it differently? In the face of paintings that can be described as pictures or images of pictures – by which I mean at first glance that we do not know whether these images are painted or imitation paintings, illusions, trompe-l’œils or careful, finished, polished and smooth paintings, even if the granulations, viscosities, softness, liquidity of the material re-produced are almost tactile. So much so that one wonders: are we in front of paintings, photographic images, Cybachromes or Cprints, hyperrealistic painted reproductions, made from photographs taken during a scientific scrutiny of the infinitely small? That sort of back and forth between photography and painting inspired by the example of Gerhard Richter? Like Richter, Lionel Sabatté plays on several levels of register causing surprising hesitations as to the nature of the medium and its harmony congruent with the drawing that he formulates in his painting themes whose meanings he does not want either to stress or to exhaust by the affirmation of a figurative skill that is very real and remarkably mastered in his techné. That is why he might endorse these two notes written by Richter:

“As far as the surface is concerned: oil painting on linen, traditional technique. My paintings have little to do with the photo; they are entirely painting (no matter what one means by that). On the other hand, they look so strangely like the photo, that what distinguishes the photo from other images remains.”
Notes, 1964-65
If I paint from a photo, conscious thought is annihilated. I do not know what I’m doing anymore. My work is closer to the informal than any other form of realism. The photo has an abstraction of its own and it is difficult to penetrate.
Notes, 1964-65

The result is this disturbing sensation of visual instability, of swaying between precise focus and “blurring” that effectively smoothes the readability of nameless shapes. The almost academic and pre-Raphaelite rendering fixes these depictions without freezing the dissolutions and mutations that their informal “forms” suggest. There is a sort of stopping of the image that seems to favour enlargement and re-pixelation that brings us closer like a terrorising target requiring our aim while waiting for its capture or destruction. The absorption – the absorbing – mentioned above for the sculptures succeeds in the paintings in a distancing of “theatre” – in the military sense of the term. This distancing suggests that the framing of what is seen and aimed at presupposes, on the one hand, one or more objects arising from the depths of age and space and, on the other hand, a conscious, identifiable and aware spectator. Hence the impression of witnessing, in real time, the development of stem cells, molecular aggregates, emerging in the flow of strange amniotic liquors. As though a revival – of who knows what, who knows where – was predicted in the formal, material effectiveness of a painting that is neither abstract nor figurative, thus confirming Gerhard Richter and the intuitions of Leonardo, torn between the contemplation of nature and the meditation on the patches leaving the possibility of unpredictable mornings on the stained walls.


Lionel Sabatté honors the springtime as a representation of degeneration, the ability of the living to constantly reconstruct itself over and over. Since 2014, the artist has worked on making trees bloom again with dead skin and human fingernails, which have become the main materials (despicable? only in appearance) for an unexpected and majestic new spawning. This is how he gives new life, through blossoming, to a White Rose (Rose Blanche 2013), elegant Bonsais (Printemps 2014), branches, Ash trees (Printemps 2015), or olive trees (Printemps 2016, for the exhibit Échafaudages d'une éclosion at the Calvairiennes Chapel, 2016).

His "elaboration of springtime" in line with his "somber repairs" of butterflies, is like living matter in constant mutation, between an energizing quest, a deficiency, and excessive growth. When, in nature, a tree will draw its sap from the earth to better lift itself towards the light, here the process is reversed, as it's the shapeless organic residue from our feet buried in the ground (Georges Bataille would say the "mud") that will blossom and thus start a revolution, and the inversion of up and down. For Depenses, an entire forest of burnt trees from the summits of the legendary Sainte-Victoire mountain is revived: the forest is spectacular and carbonized, a memory of burnt nature, which is transformed through its vitality.

In Part Maudite, didn't Bataille say: "I insist on the fact that, generally, there is no growth but only many forms of a luxurious squandering of energy! The history of life on earth is primarily the result of an absurd exuberance." Sabatté answers by releasing energy to the point of calcination, energy sacrificed by a powerful sun, which he uses for the transformation. For the artist, who remembers walking atop the fiery volcanoes of Reunion Island during his childhood, ashes are not a synonym of death, but instead of fertility: to tread upon burning embers is a rite of passage. In the same vein, he often makes references to prehistoric cave art and negative hand imprints (think of Bataille's Lascaux), considered the most authentically human traces of a passing and a living breath, which become imprints by offering themselves to these ancient walls. The burnt forest blooms again and interacts with a pictorial work, through a completely organic conversation. Indeed, painting is for him an endless "factory of depth", whether the depths of history or geography. The painting captures a vital intensity from the depths of the sea. In pictorial practice, produced on a flat surface, liquid paints and chemical reactions alike give birth to aqueous and stringy surfaces, squirting jellyfish, a concentration of toxic and stellar colors. The painting tells a tale of the original depths of life, while the forest of trees reminds us of the power of the infinite transformation of life on the Earth.