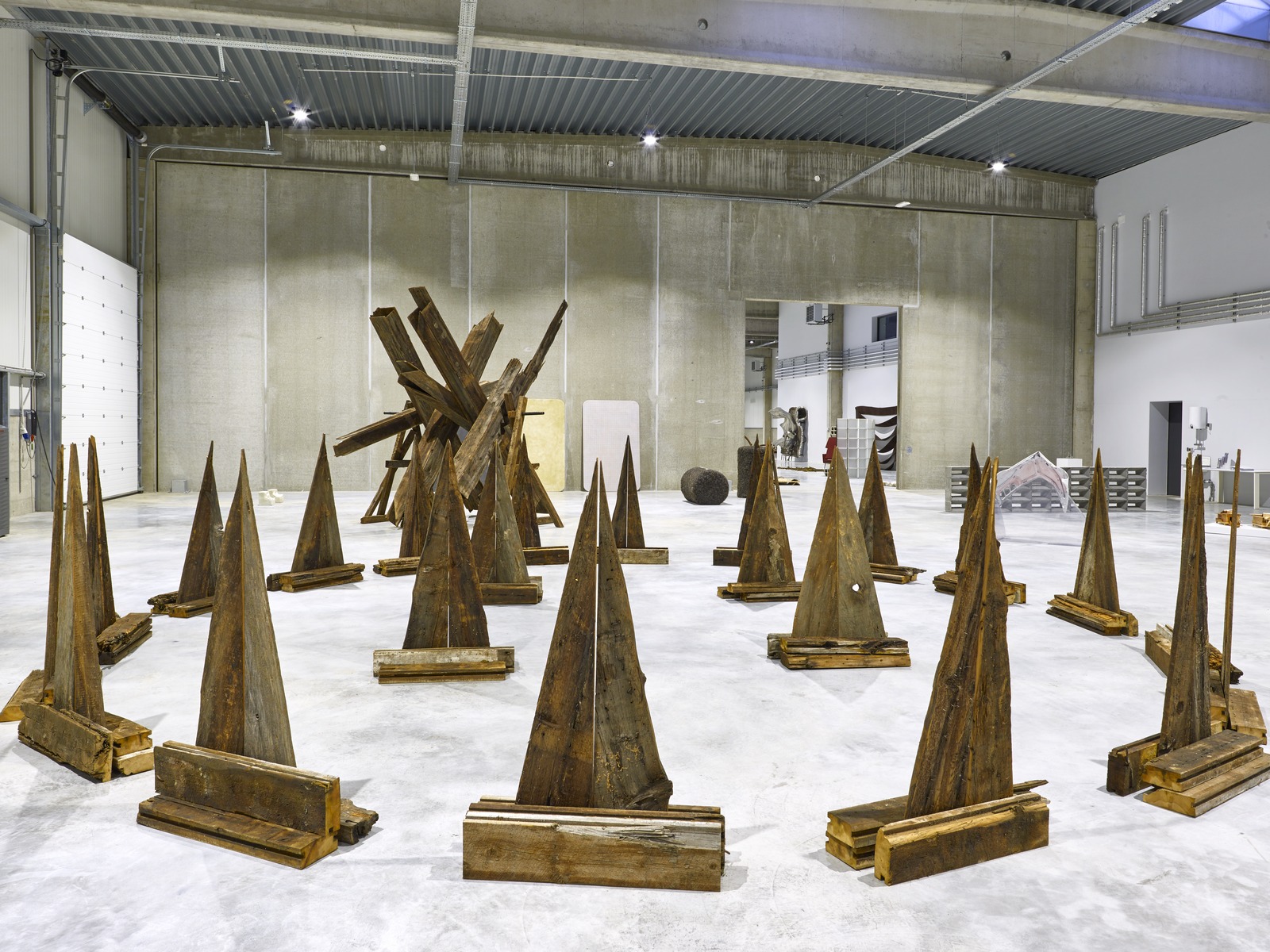 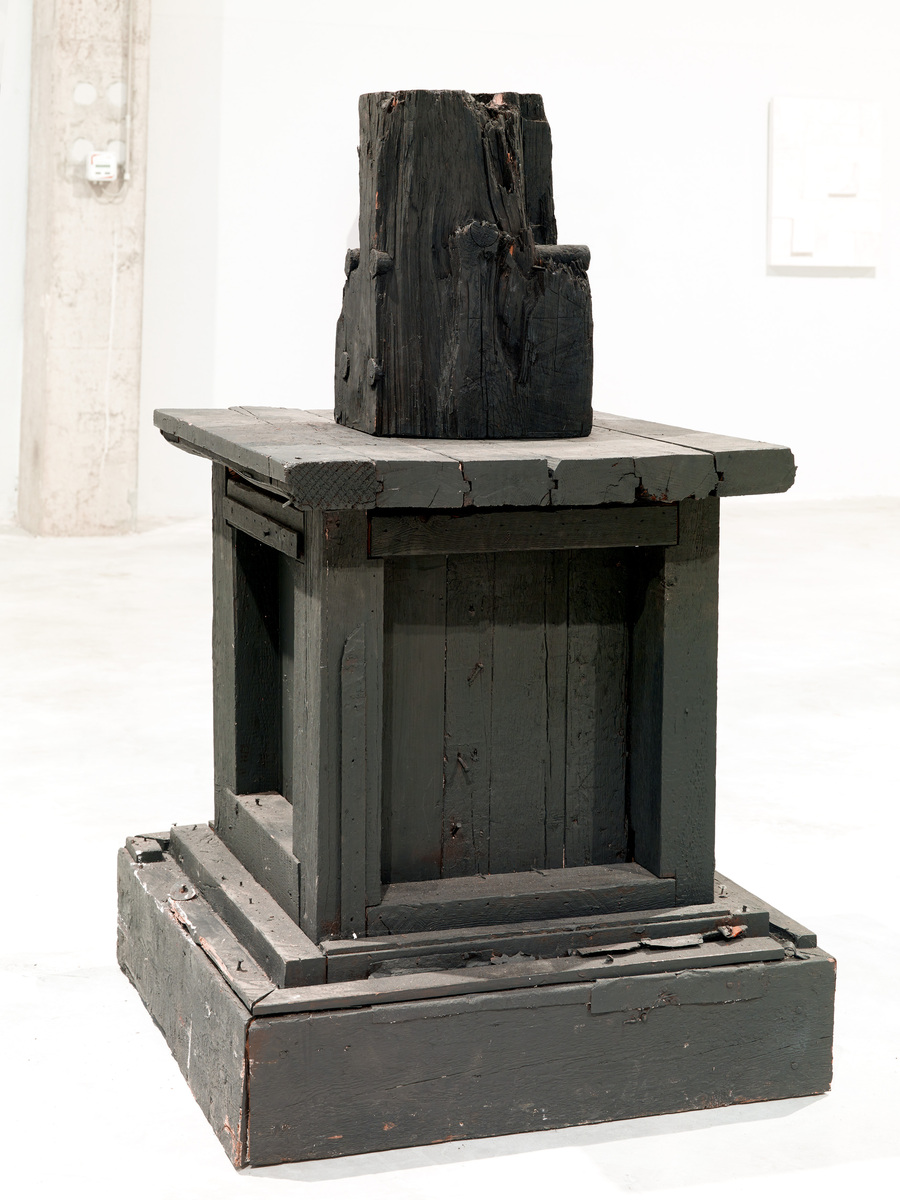 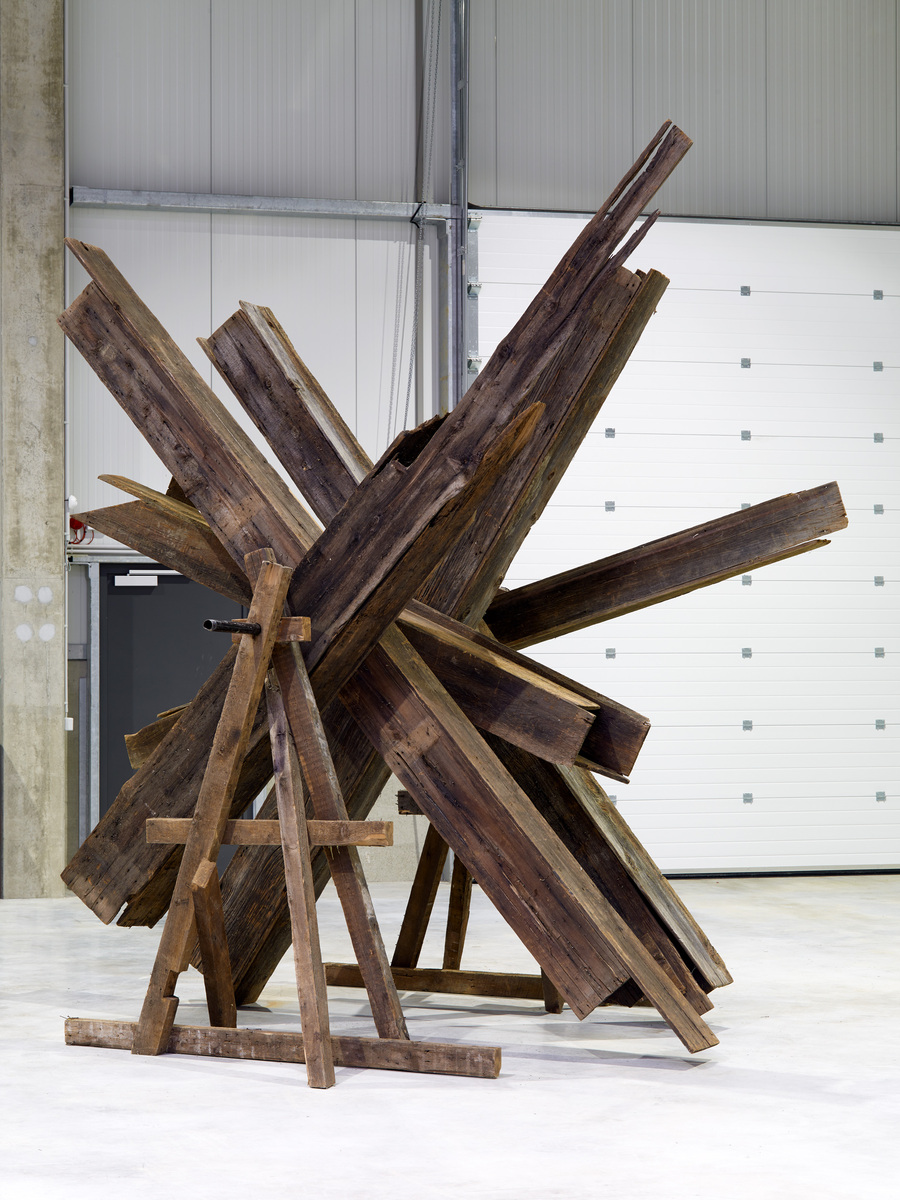 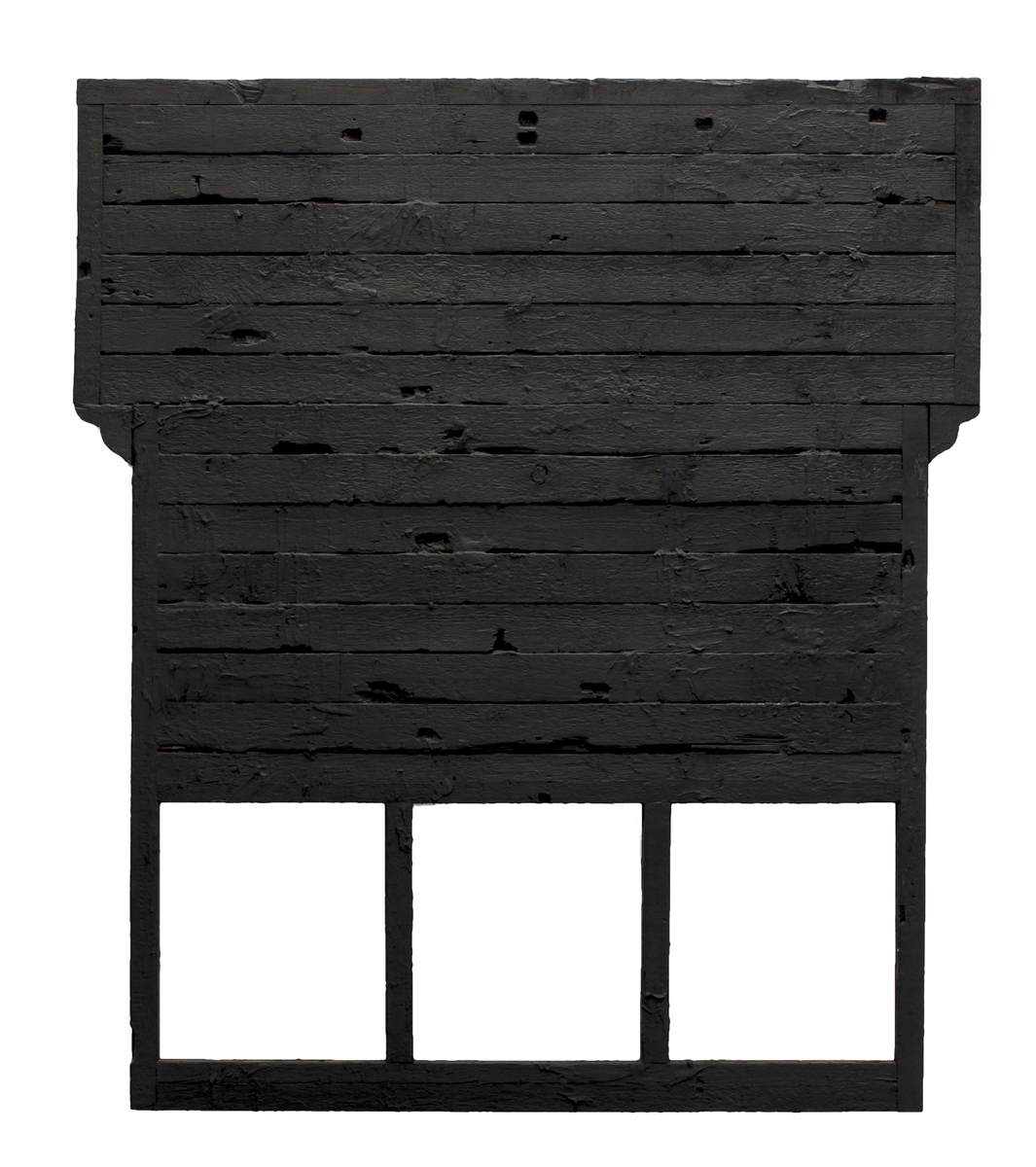 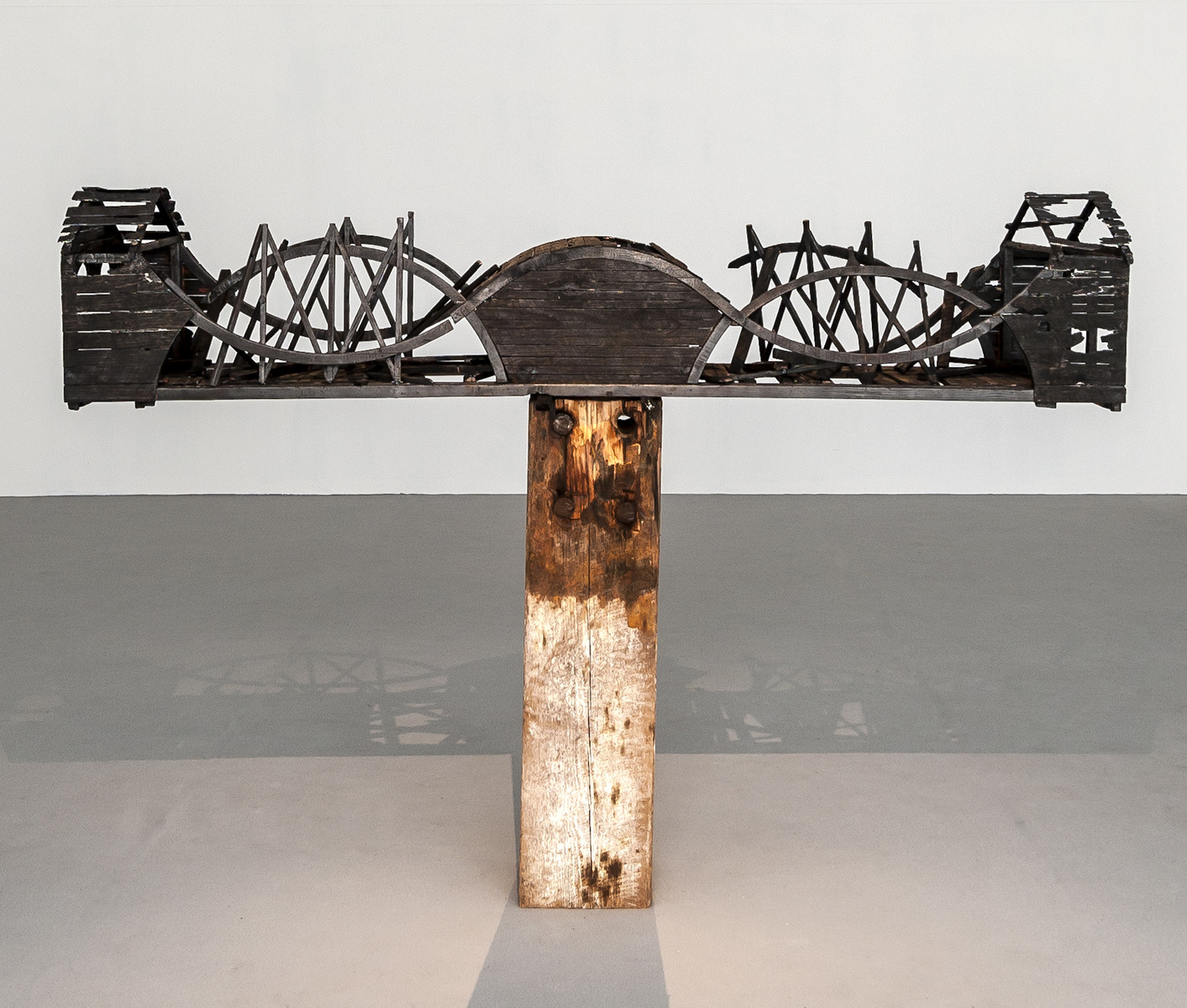 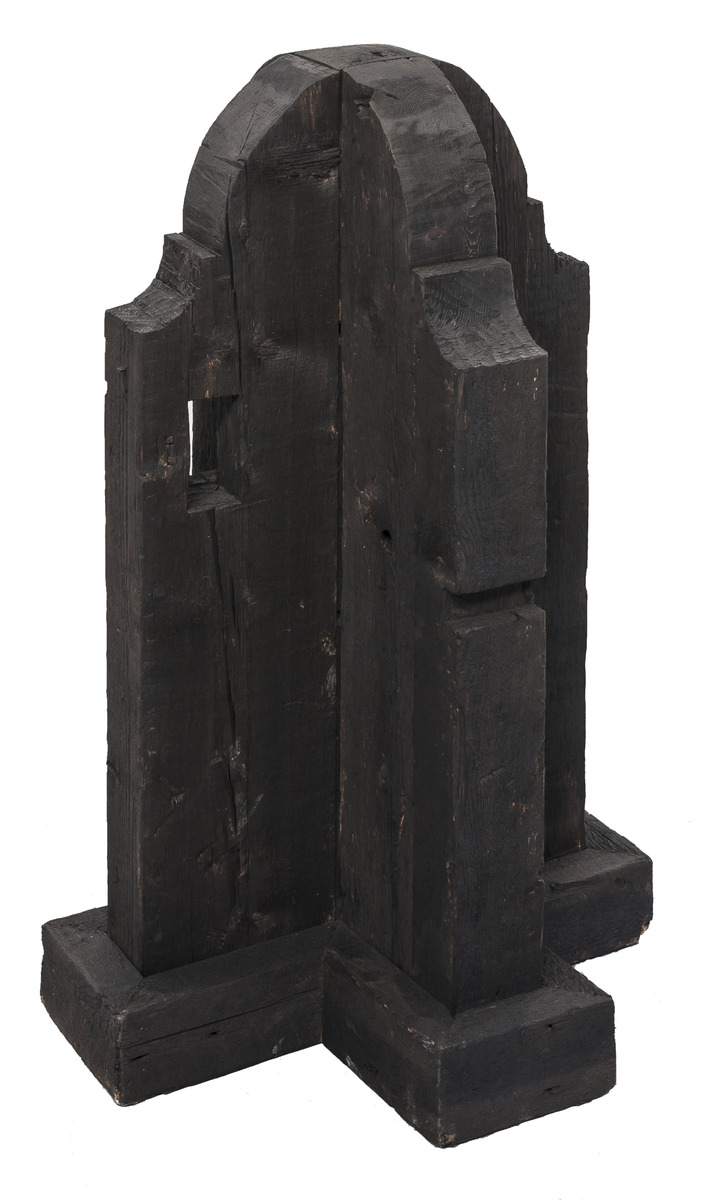 Marianne Vitale (b. 1973) graduated in 1996 from the School of Visual Arts, New York. Her work has been featured in exhibitions at the Whitney Museum of American Art, The Kitchen, White Columns, the Brooklyn Museum, Anthology Film Archives; and international venues such as Le Confort Moderne, France ; Tensta Konsthall, Sweden ; UKS, Norway ; Cass Foundation, London ; Contemporary Art Center of Vilnius, Lithuania.

Some stars, a bridge and birds...
Ann Craven / Marianne Vitale


The exhibition brings together the work of Ann Craven and of Marianne Vitale for the first time. Both were born in the 1970s and live in New York. One is a painter, the other a sculptress. The exhibition's title - "Some stars, a bridge and birds" - suggests a poetic scene, sketching out the outlines of an idealised landscape. And it is also a partial and objective indication of what we find in the exhibition. These artists' works share a strong attachment to their evocative powers while attempting to reduce the images summoned to a condition of mere motif. Two strategies are employed here: where Ann Craven reproduces and multiplies in order to empty the images of all emotional charge, Marianne Vitale burns matter, mistreating it to make her objects change dramatically within an experienced reality.

The links to time and memory are also a shared feature of the two artists' work. Both try to fix time, to construct mementoes before memory alters them. Ghosts of emotions thus run through Craven's pictures: loved ones and unforgettable moments are metamorphosed into birds, trees and a multitude of moons. And for Marianne Vitale's part, she summons up the history of the pioneers of America's far west as metaphor for a genres-based history of art that she puts on a pyre in to re-appropriate them with a forceful energy.

The universe is a dark place. Nestled within it are other darknesses: solid ones-basements, bruises, bullet-holes-but also nebulous ones: moods, deep sleep, disease. There are, we posit, brightnesses too-perhaps truly unknowable to humankind, dwellers of the hinterland between these ports, a bright-darkness flecked with pieces of each. Here, we rub shoulders with bitter-sweetness, day's end, weather systems, day and night, rugged landscapes, life and death, and, not lastly, each other-the most intense brightdarknesses glaring in the ether may well, of course, be ourselves. Feeble, fickle humans, simultaneously embracing and raging against the jaws of a yawning darkness, longing for a solace we defer to celestial bodies suspended over heavy flesh, safely out of reach, briefly illuminating our fragile elliptical paths before vanishing into the daylight.

To be manifested into being means also to confront the day when we will be not so; some attempt instead to forget their death-day, backs faced to the setting sun. From this perspective, those who confront and contemplate the vastness of a universe that highlights our ticking clocks might be viewed as courageous, or even destructive. Not one to shy away from decay, Marianne Vitale stands among the brave, stubbornly facing our demise without recoil, and encouraging her viewership to follow suit. Like the planets and stars that impersonally guide us our entire lives, Vitale's sculptures, recapitulated from found wood into uncanny forms, are crystalline embodiments of the
bright and the dark: oafish and delicate, intimate and austere, friendly and foreign, known and utterly mysterious, they all point to our frayed edges, and to our ever-present descent into a life no longer lived.

In "Bright Dark Future," Vitale configures her materials of choice into a series of sculptures representing the planets and sun of our solar system. The effect-of awkwardly pointing to a celestial "truth" that points back to our own mortality-connotes one Giordano Bruno (1548 - 1600), the wandering, and later defrocked, Dominican monk, whose conception of infinity predated his culture's ability to ascertain or even grasp it. An itinerant philosopher, mathematician, and amateur astronomer, active during the waning years of the Italian Renaissance, Bruno was by all accounts relentlessly analytical and sassy to boot. Like Copernicus, Bruno believed that the earth revolved around the sun, but Copernicus toed the Vatican line with his belief that the solar system was a closed network, surrounded by a border of fixed stars. This fenced-in theory of the cosmos, in spite of its heliocentric proposal, kept Copernicus out of mortal danger with the Catholic church of the late Italian Renaissance, perhaps because it mirrored the Church's hope that an increasingly-decentralized authority would not yield total chaos-the masses were still somehow containable, twinkling in position, and therefore controllable. Bruno's theory blew this uneasy truce to smithereens.

In The Infinite Universe and Its Worlds (1584), twenty-five years before Galileo's telescope, Bruno outlines his belief that Copernicus' putatively fixed stars were all suns in their own right, and that our solar system was no more the center of the universe than any other sun's network would be: "Innumerable suns exist; innumerable earths revolve around these suns." Later, in his work In Cause, Principle, and Unity (1588), Bruno states that "the universe is…one, infinite, immobile…It is not capable of comprehension and therefore is endless and limitless, and to that extent infinite and indeterminable…" These decentralizing, and therefore destabilizing, ideas were doubly revolting to Roman inquisitors: Bruno was eventually imprisoned and burned at the stake. Fittingly, he was prescient regarding his demise, choosing for himself the code-name "Fagot" when spying on Catholic conspirators many years earlier, preordaining his fate as kindling. Decades spent in contemplation, both monastically and empirically, of infinity and vastness, created in Bruno a well-adjusted attitude to his own finiteness: When handed his death sentence, Bruno apparently retorted, "Perchance you who pronounce my sentence are in greater fear than I who receive it." For this fearlessness, and for embracing infinity in the face of dogma, he burned.

Unlike Bruno, Vitale was born into a civilization bombarded with visual information and statistical analysis, reaching far beyond the naked eye, and with more than enough means to empirically explore the supraterrestrial realm. Vitale's "Bright Dark Future" posits that there are constraints imposed by the existence of too much sight-oversight, really. When knowledge ossifies into "fact," relentlessly fleshed out and then embalmed, what shape might our visions then take to depict the otherness of foreign realms no longer beyond our reach-in this case, the solar system? Vitale succeeds in her depiction by harkening back to a time before empiricism, where roughly hewn objects served as our divining rods, dialing up a pagan impulse to fashion crude, yet illuminating, idols of the world around us. Each planet, including the sun and recently demoted Pluto, is recreated totemically as an object of earth, haptic and imposing, alien and illuminating. Through this process the known is made unknown, free to touch us again; within arm's reach the sun and planets threaten our fragile mortality, no longer safely statistical and far away. What keeps these sculptures in the contemporary moment is the fact that-though they touch on Vitale's pre-existing body of work, of wood-based reliquaries of the American frontier-the pieces in this system are very much from our time: decommissioned wooden beams rescued from a lumber yard; a model of a functioning bridge made in the present day and then burned; a bunker and barn, for war and farm, sharing a room; all rendered as celestial stand-ins by their hand-hewn alterations and reconfigurations-a very Vitale treatment indeed. Vitale has always been a shape-shifting time eviscerator, an artist engaged with collapsing the binary of the "in here" and "out there," the then and the now, the prehistoric and apocalyptic, the roots and the blossoms. Hilarious one-liners become epitaphs upon further inspection; arcs are grounded, bridges rendered useless for passage and connection. The signposts she concocts are themselves the signs, and actively sabotage guidance.

Though Vitale's universe does not follow a traditional Copernican layout, the Sun is still accorded prominence through scale, rendered large and imposing. Hunkeredtogether wooden beams impaled on a spike running between two supports, this sculpture is the only one that implies motion, yet it is fixed in position. At once menacing and stunning, the piece emanates no warmth. However, by virtue of its scale-enormous and imposing, but still small enough for us to relate to our bodies-it feels approachable, almost mortal. Much like the real sun, the untreated wood of this structure will eventually grow dark.

All of this sun's planets careen gloriously between blunt and refined, gorgeous and grotesque. Little Mercury, a burned, miniaturized model of Vitale's larger burned bridges, is precariously piled atop a wooden plinth, which is in actuality a cut section of an excavated wooden beam from a factory. Bathed in orange light and ensconced in its own room, the scale of the little bridge's beams appears even more fragile against the solid wood of the plinth. By contrast, the jagged constructed spikes of orotund, kingly Jupiter in a nearby room jut up from the flat ground, devoid of pedestal, and therefore status, but no less imposing. Each spike is almost the size of a human being, lending the massiveness to Jupiter that we have come to expect from our primary school learning and childhood dreaming. Jupiter shares a room with the Sun and Mars. Mars, a blackened false front, becomes a cornerstone of Vitale's bleak and friendly vision and bright-dark sense of humor; a would-be storefront-emblem of commerce, and therefore life-instead serves up a whole lot of nothingness.

Saturn and Neptune are quieter planets. Saturn is a wall-bound, twenty-six-footlong schema of bound, found wood, geometrically contrasting with its celestial neighbor, Neptune: a delicate A-frame-esque tripod of burned wood, its central platform organically reminiscent of a rotting boardwalk, abandoned in some backwater of the universe. A demoted Pluto is represented by a blackened gravestone, which marks the departure of this little dwarf from our solar systemic consciousness.

One striking room-perhaps narcissistically so-in Vitale's system is home to Earth; also Venus and Uranus. Earth, our dark and dirty bunker replete with life, is rendered as such. The density of this bunker-in-miniature, complete with dark little windows, is palpable; much like looking at a satellite photo of our own planet, one can almost feel the kinetic energy of growth and decay embedded within. Next to earth is the gorgeous, unknowable Venus, our ethereal neighbor, so close and yet so far. A tall, elegant, sixteen-foot-tall beam lingers near the squatter earth. Unburdened by life, Venus is free to smolder at a just-out-of-reach distance. Further away lies alien and awkward Uranus, a cantilever barn hoisted onto blackened posts.

By taking the universe and making it relatable, Vitale may appear to be standing in loving opposition to the infinitely expansive Bruno. Vitale's "post-frontier" impulse is to draw us closer-but not too close-into an embrace that falls just short of physical contact, like that of moths flirting, pre-immolation, with a flame. But the darkness of this proposition lays in that almost, in everything beyond the totem that cannot be illuminated, everything between and around that embrace. We follow Vitale's light into an infinite, yawning chasm, glimpsing innumerable suns and earths sprawling in every conceivable direction and all pointing back to our little planet and its residents, a wellmeaning bunch unable to escape their more-or-less "here and now." In that way, Vitale and Bruno are only a hair's breadth apart, in time and place but also is mission: they both make us gaze at the abyss, accepting no responsibility for what we find there. Our only certainty, after all-our greatest comfort and terror-is that one day we and the sun will die, leaving each other cold; then perhaps those left behind will use Vitale's sun to build a fire.

2012
WHAT I NEED TO DO IS LIGHTEN THE FUCK UP ABOUT A LOT OF SHIT, Zach Feuer Gallery, New York, USA
IF YOU EXPECT TO RATE AS A GENTLEMAN, DO NOT EXPECTORATE ON THE FLOOR, Unge Kunstneres Samfund, Oslo, Norway

2011
Too Much Satan For One Hand, IBID PROJECTS, London, United-Kingdom

2011
Marianne Vitale : What I need to do is lighten the fuck up about a lot of shit 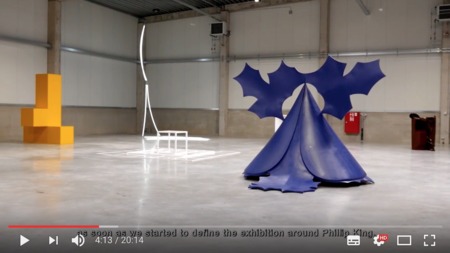