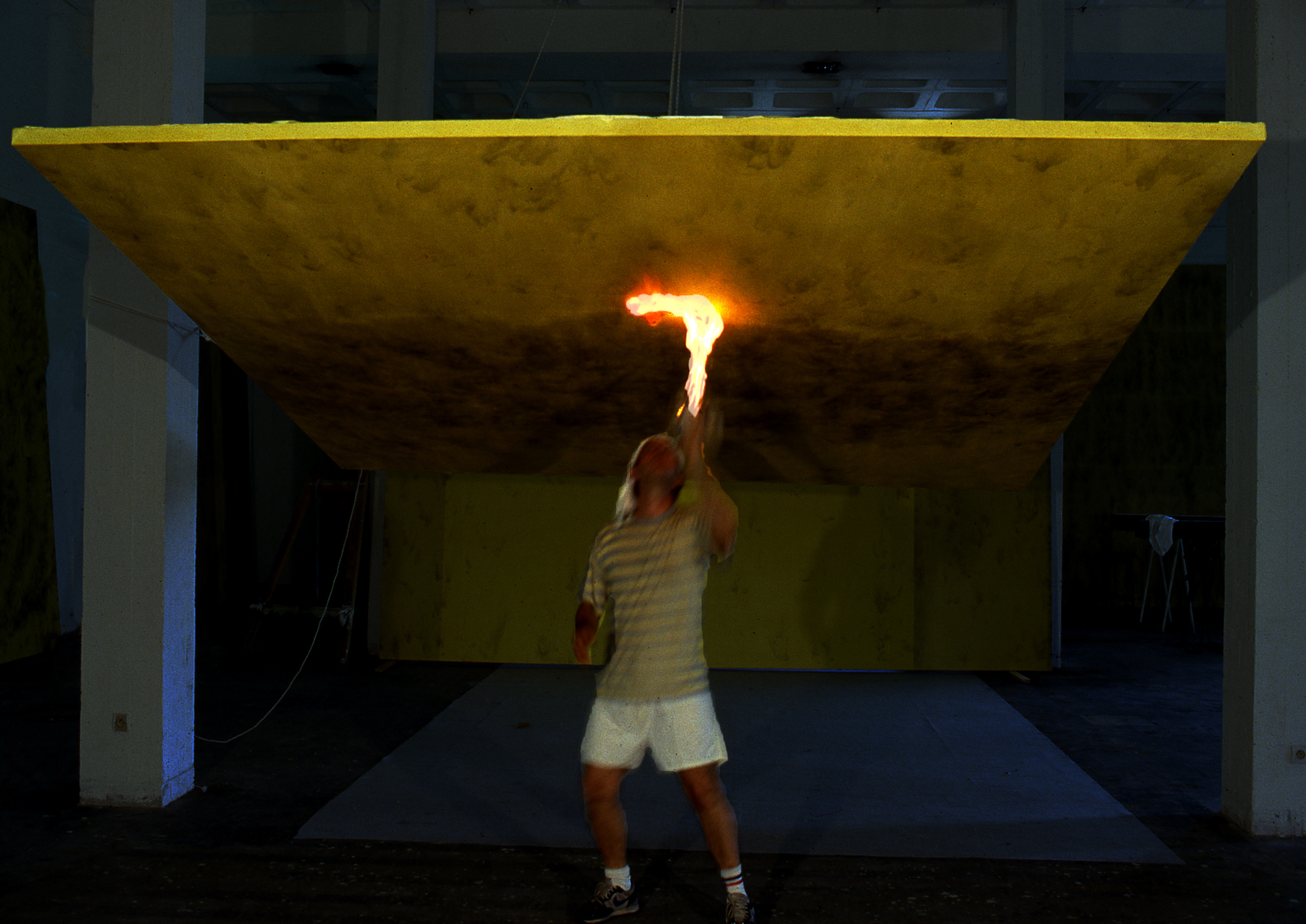 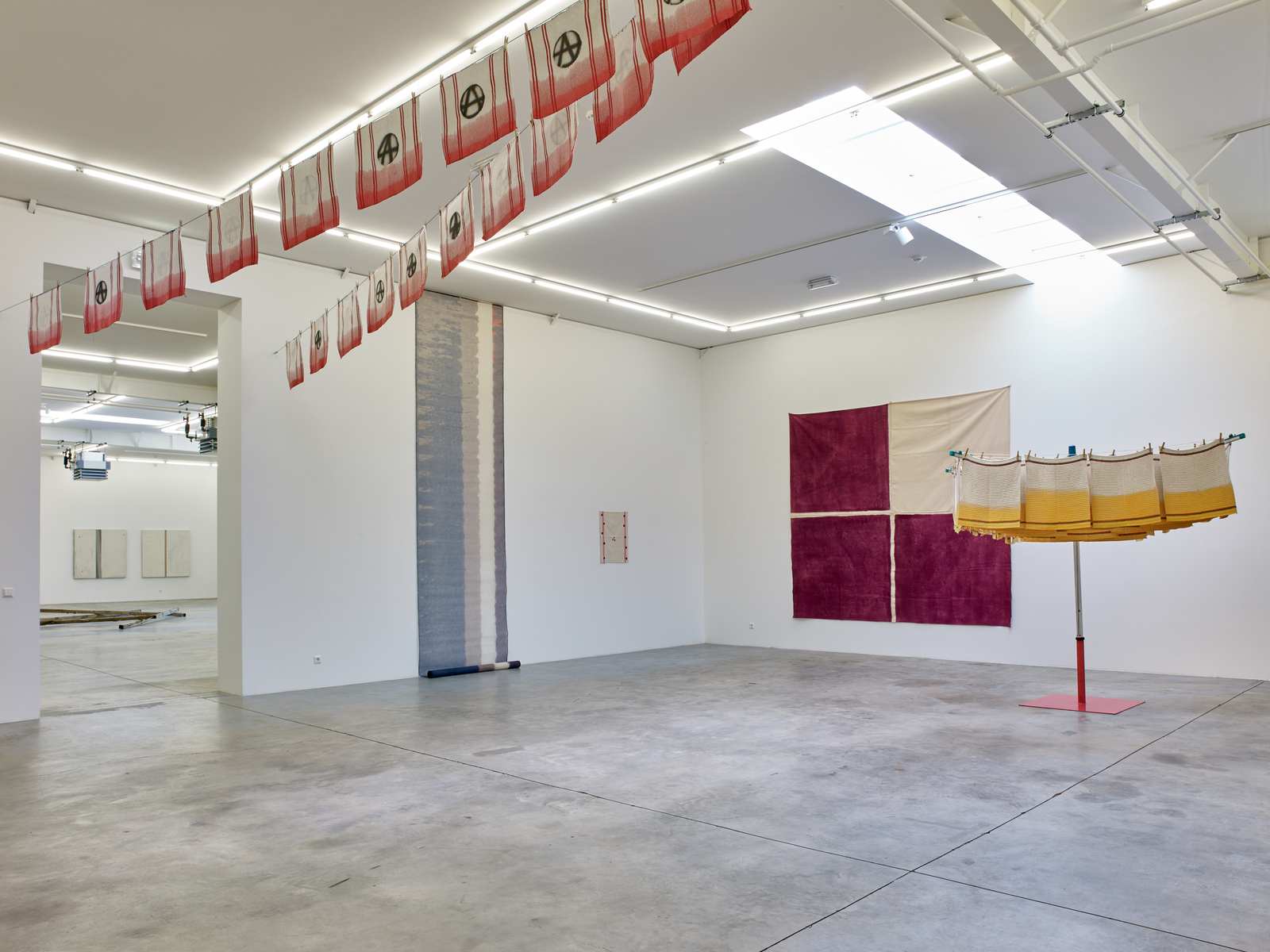 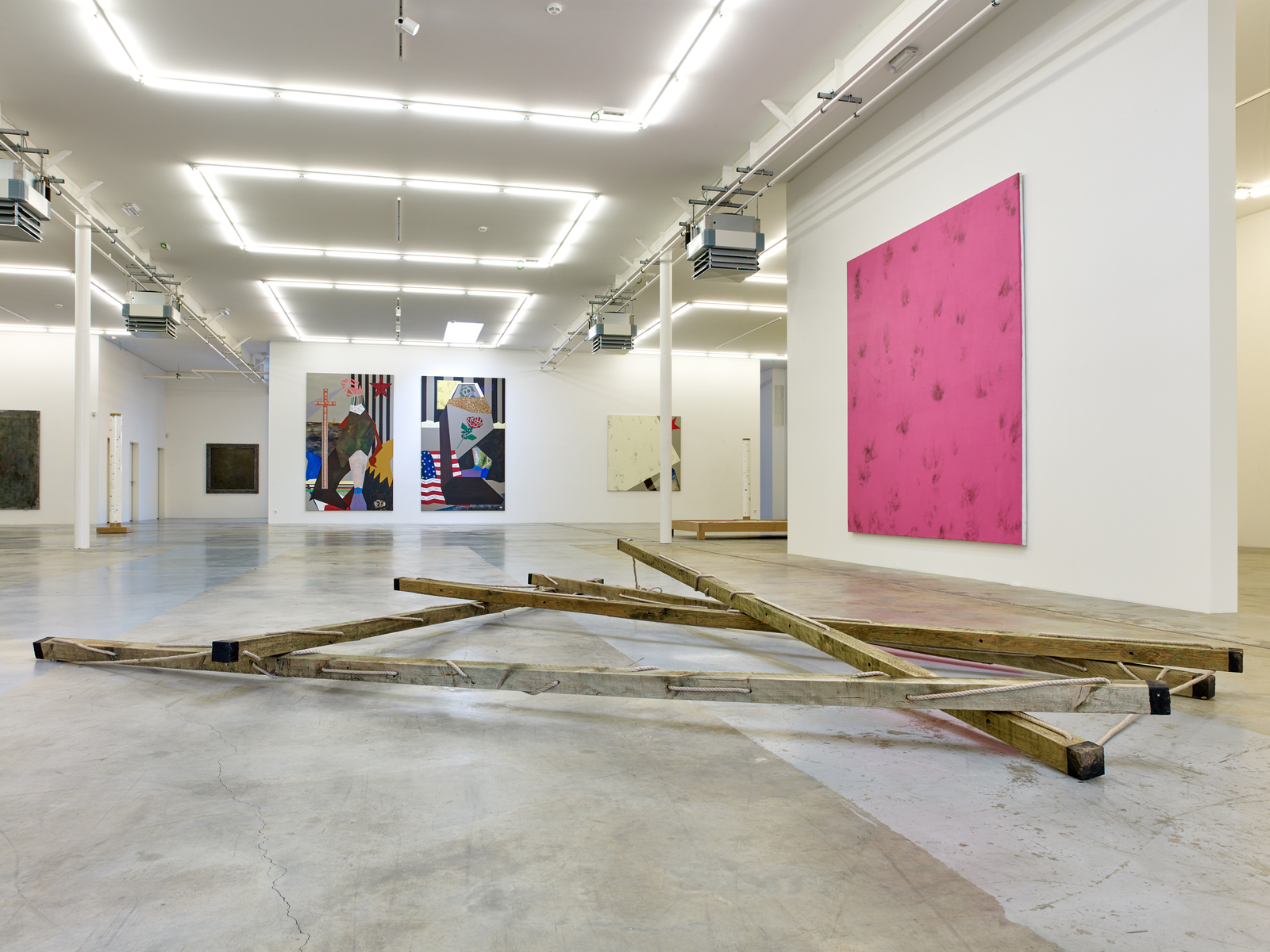 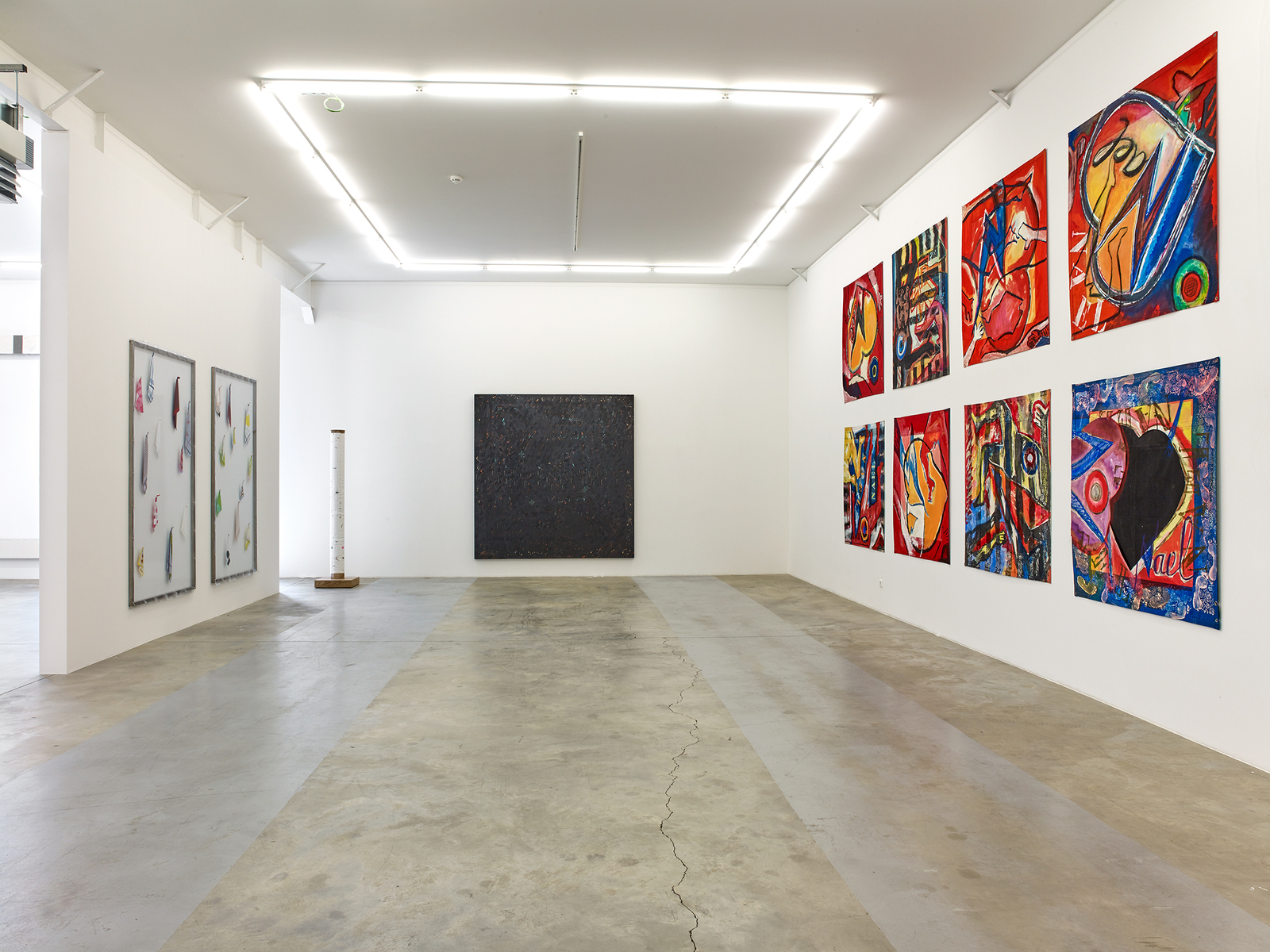 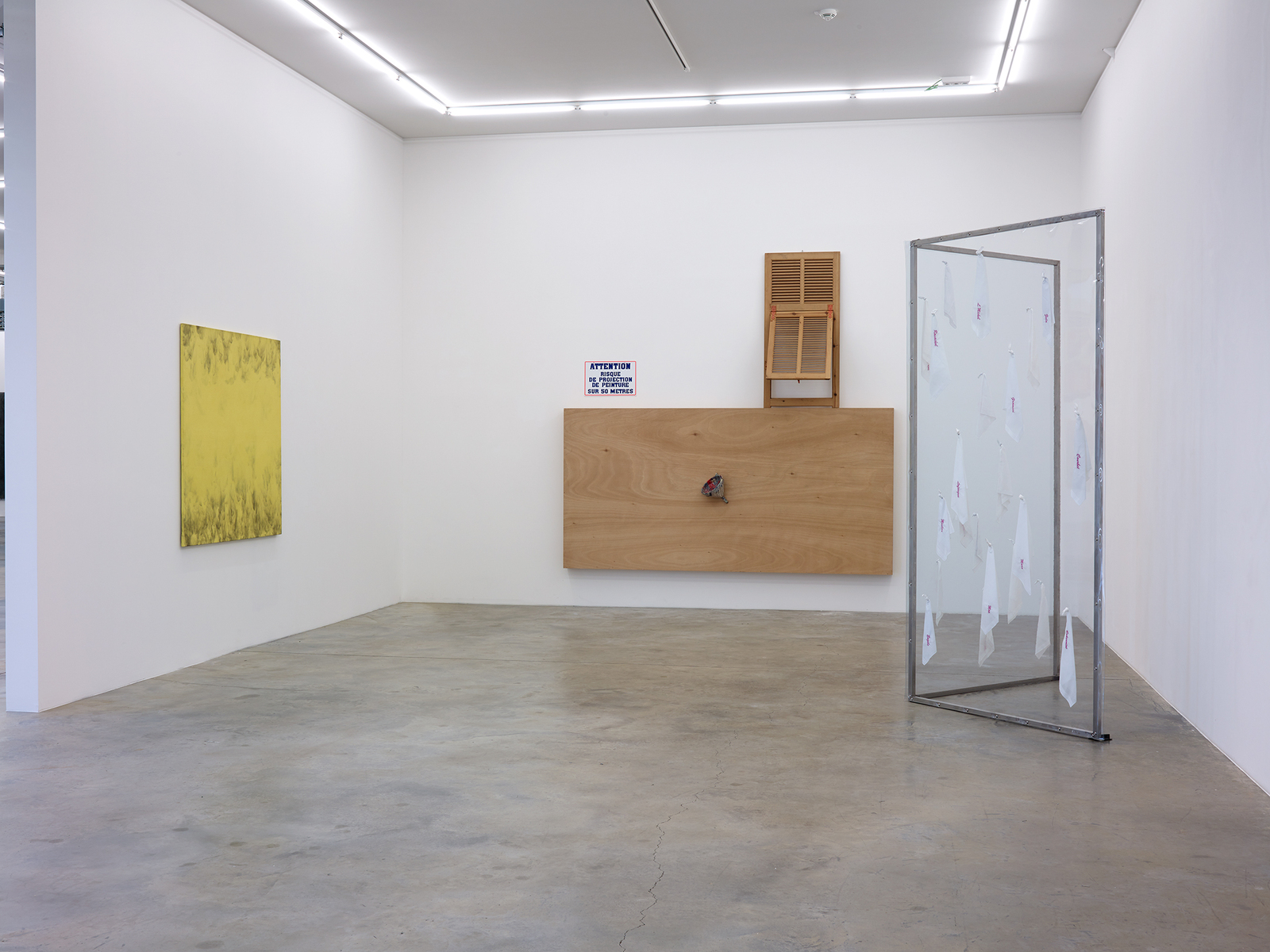 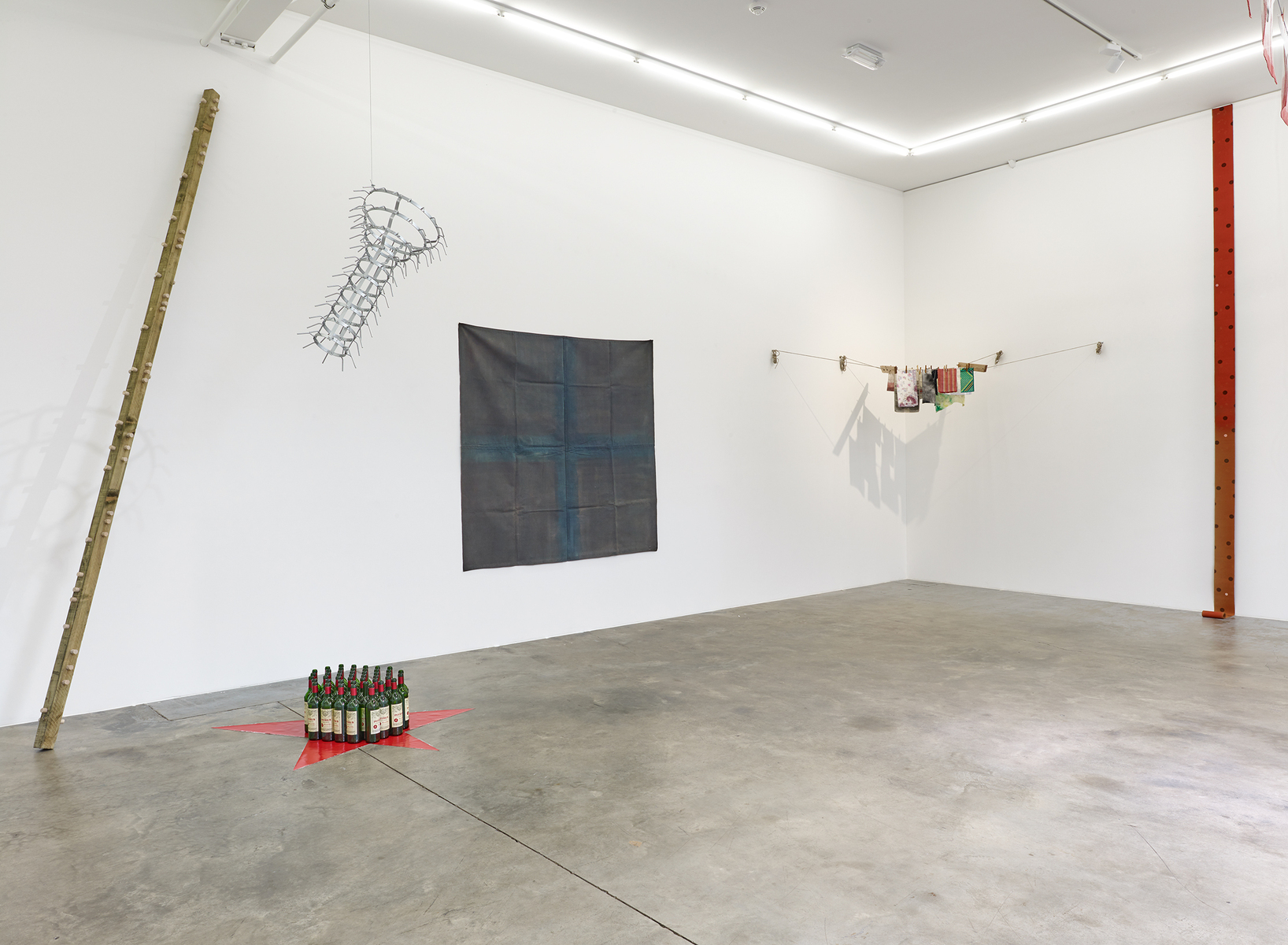 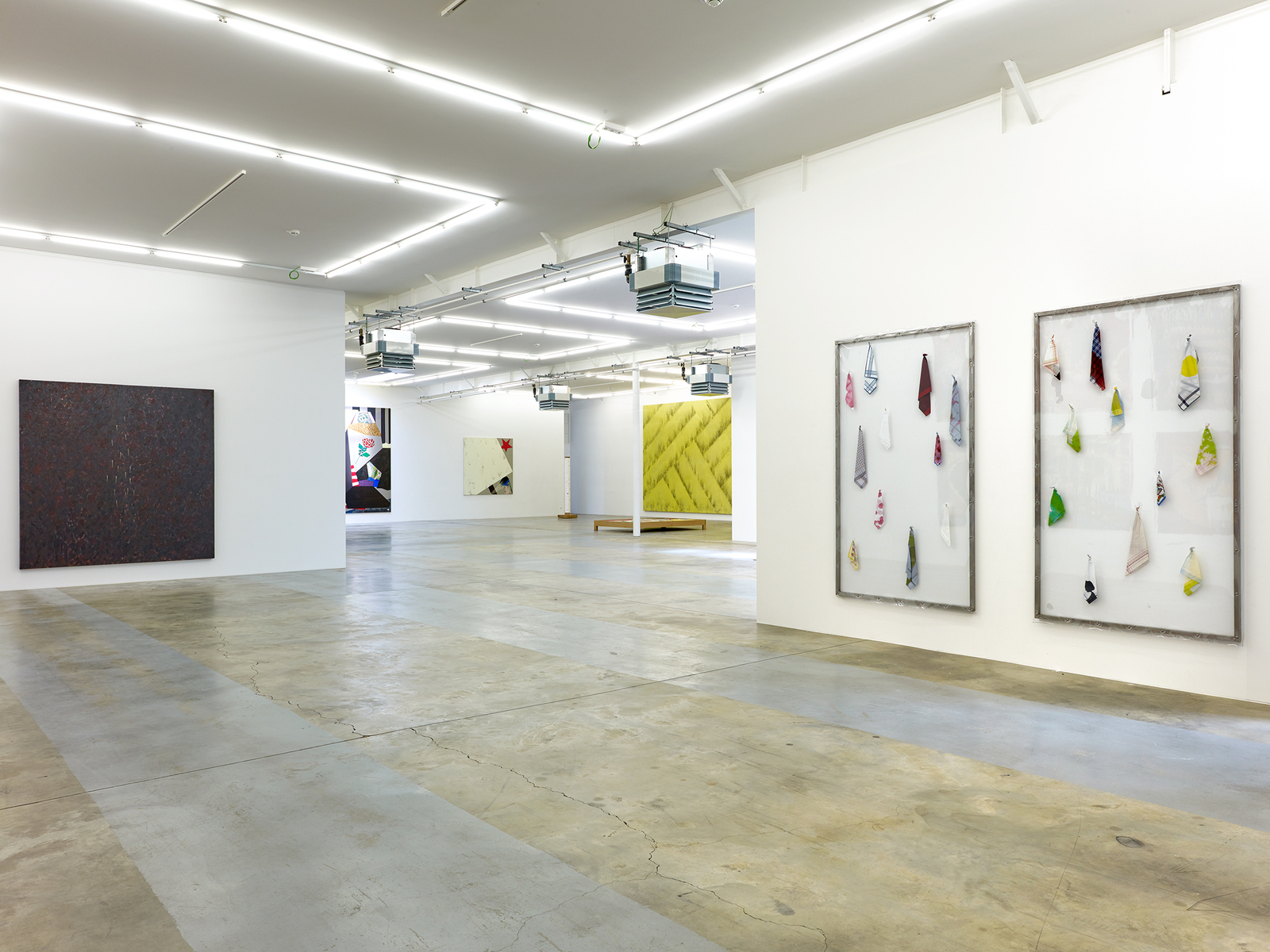 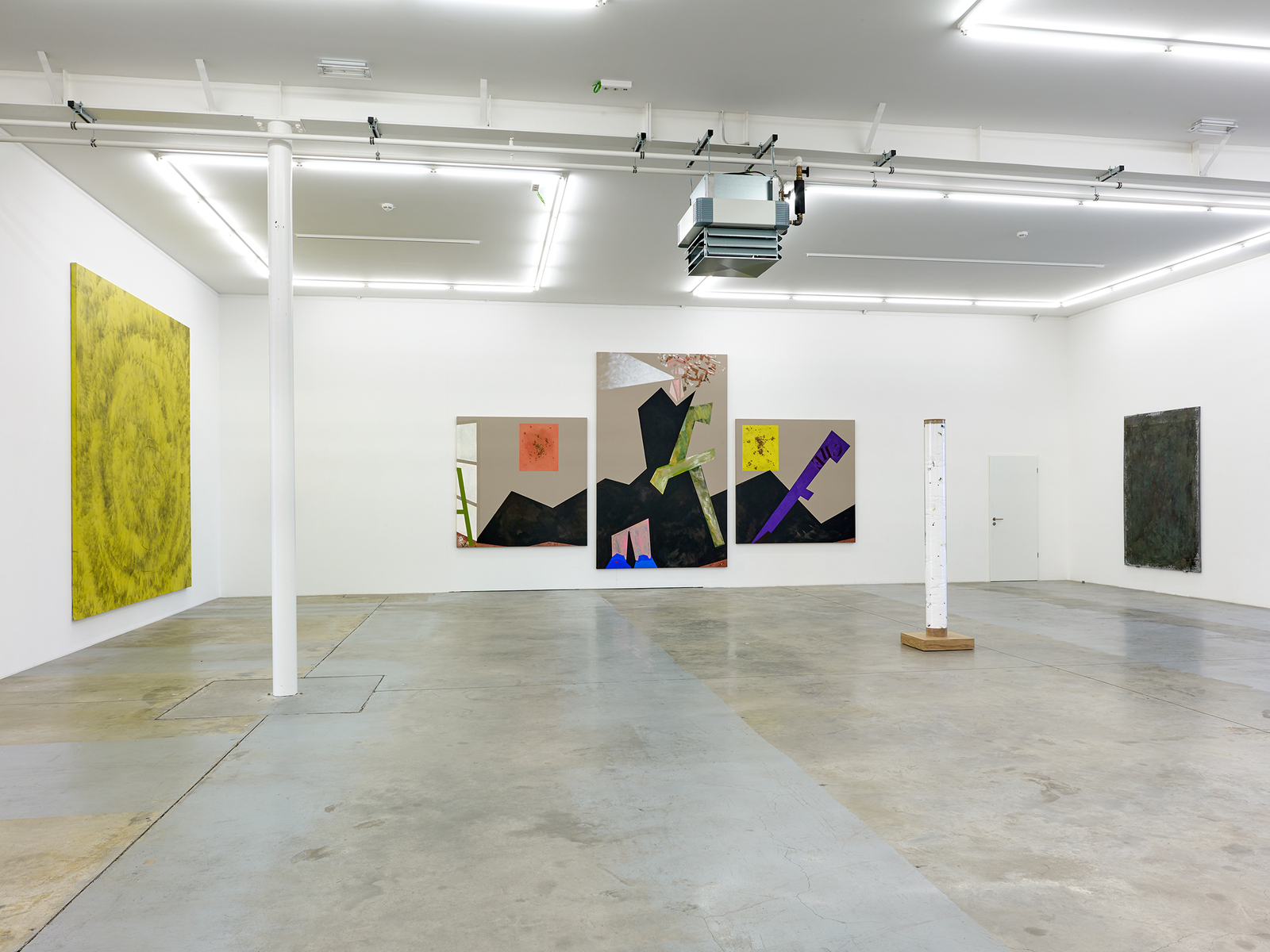 
The Noël Dolla exhibition in Wandhaff presents a selection of paintings and sculptures created over a period of more than four decades, from the S.O.S. works of 2016-2017 to the works of the Support/Surfaces years. The intention is not that of putting together a retrospective and even less that of showing a work from each period, but rather of focusing on the changes and major moments of transformation in the work of Noël Dolla.
To do this, large-sized works are compared in series with the escalation of the display encouraging a dialogue on monumentality. As with Les Silences de la fumée (1990) – the wall of S.O.S. (2016-2017); Les Jeunes filles aux œillets (2007) – Les Carrés magiques (1982-1983), for example. True to the motto of being against the acquisition of a knowledge, through the device of this exhibition, Noël Dolla shows large ensembles in which form is carried to its culmination, to the point of exhaustion by gesture. It is as though there be a reification of form that unfolds in dimensions rarely presented to the public. All of these series, however, are limited in order deliberately to restrict production so as not to enter into an infinite production.
The first room is devoted to the S.O.S. where we find the presence of the artist’s vocabulary on the square canvases. The tarlatan is accompanied by dots of paint; the sides of the works are also painted and the presence of the linguistic S.O.S. signs or plastic signs in the shape of a cross are superimposed on the composition. Starting with a minimum of signs and materials, Noël Dolla establishes a visageness, which, as Deleuze might say, is distinguished from a face by the fact that it expresses an identity that is renewed with each canvas painting. Each S.O.S. is traversed by regimes of identity, and the hanging by accumulation seems confined to the crowded wall that faces the visitor under an emergency light, that of rotating beacons. The blinking of the blue and red lights captures the vision and disturbs the senses.
The second room functions as a form of breathing for these first visaged walls. The large outpourings of evanescent smoke establish a sort of silence in counterpoint. The monumentality of the smoke corresponds to the intimacy of each S.O.S. in a dialogue of ruptures – dimensions – materials – time of execution. The space in the gallery is also punctuated with items that exploit verticality with respect to the oversized plumes of smoke. The Colonnes aux leurres, colonnes aux hameçons create this play between elevation, structure and materiality on one side and verticality of the planes and diaphanous aspect of the volutes. Still going back in time in Noël Dolla’s oeuvre, the following works present, in particular, a series of Carrés magiques that are the result of an older performative work. Each Carré or square is a tiny part of a whole, a snippet of precise time fixed in an infinite continuum. The size of these Carrés magiques is confronted with the intimate nature of the Jeunes filles aux œillets (‘Young girls with carnations’) whose process of creation involved a carnation colour that was each time different and in which the carnation fixed the regime of visageness for ever. Human time is thus very closely questioned by these works, which have been seen little in public. The last room is devoted to the Supports/Surfaces period, which historically marks both the beginning of a period of questioning form, material and the basis of a work at a time when art was by its professionalisation becoming a “trade”, and on the other hand responded to the first intention of the S.O.S. works, which cannot be seen without thinking them to be, in some way, “Support Or Surface”. The coherence of the exhibition pays tribute to the work of Noël Dolla for the first time in an approach that is historical while linking the past to the present in a journey in which a historical or personal urgency shows that each period has something to say to the other.