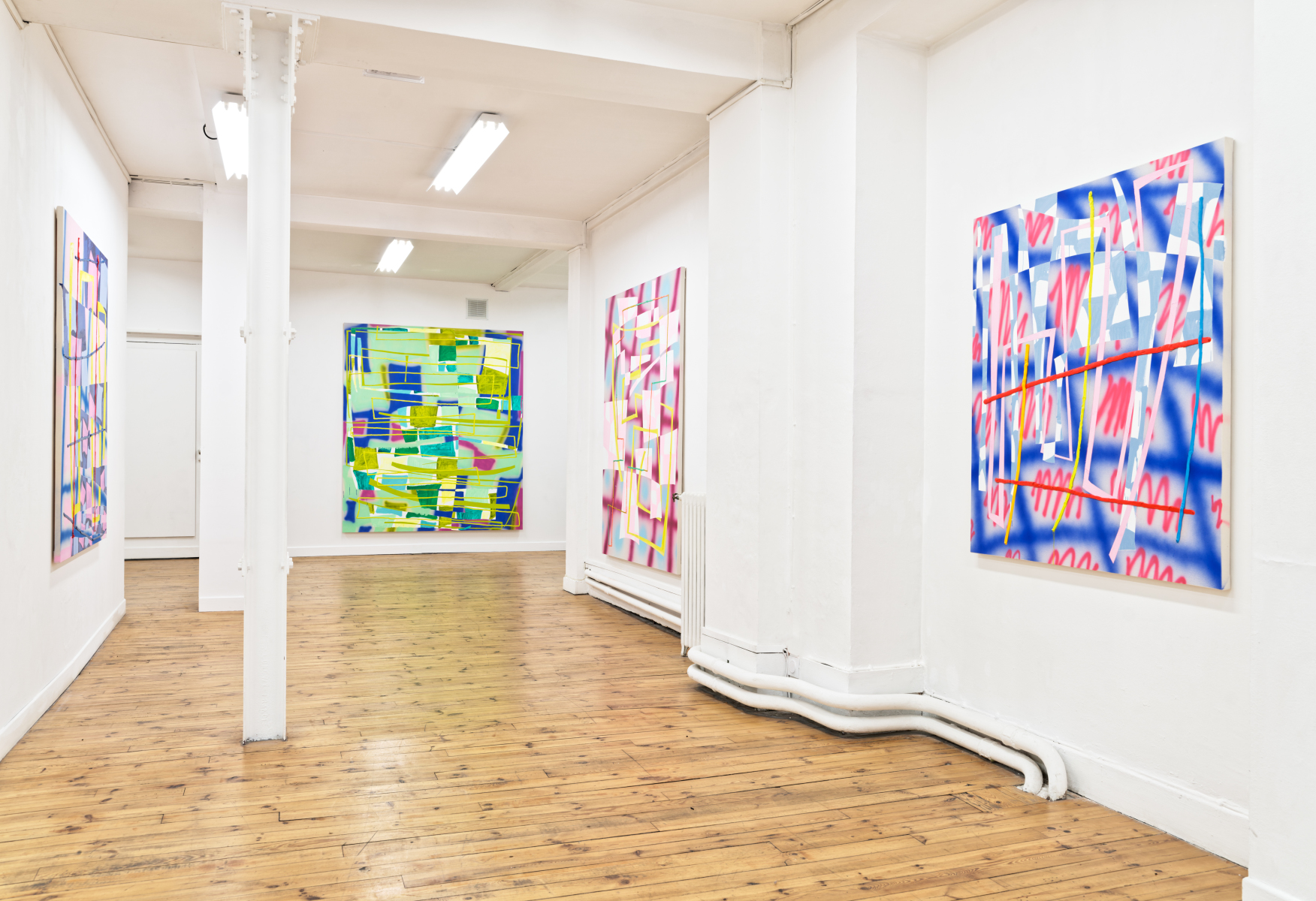 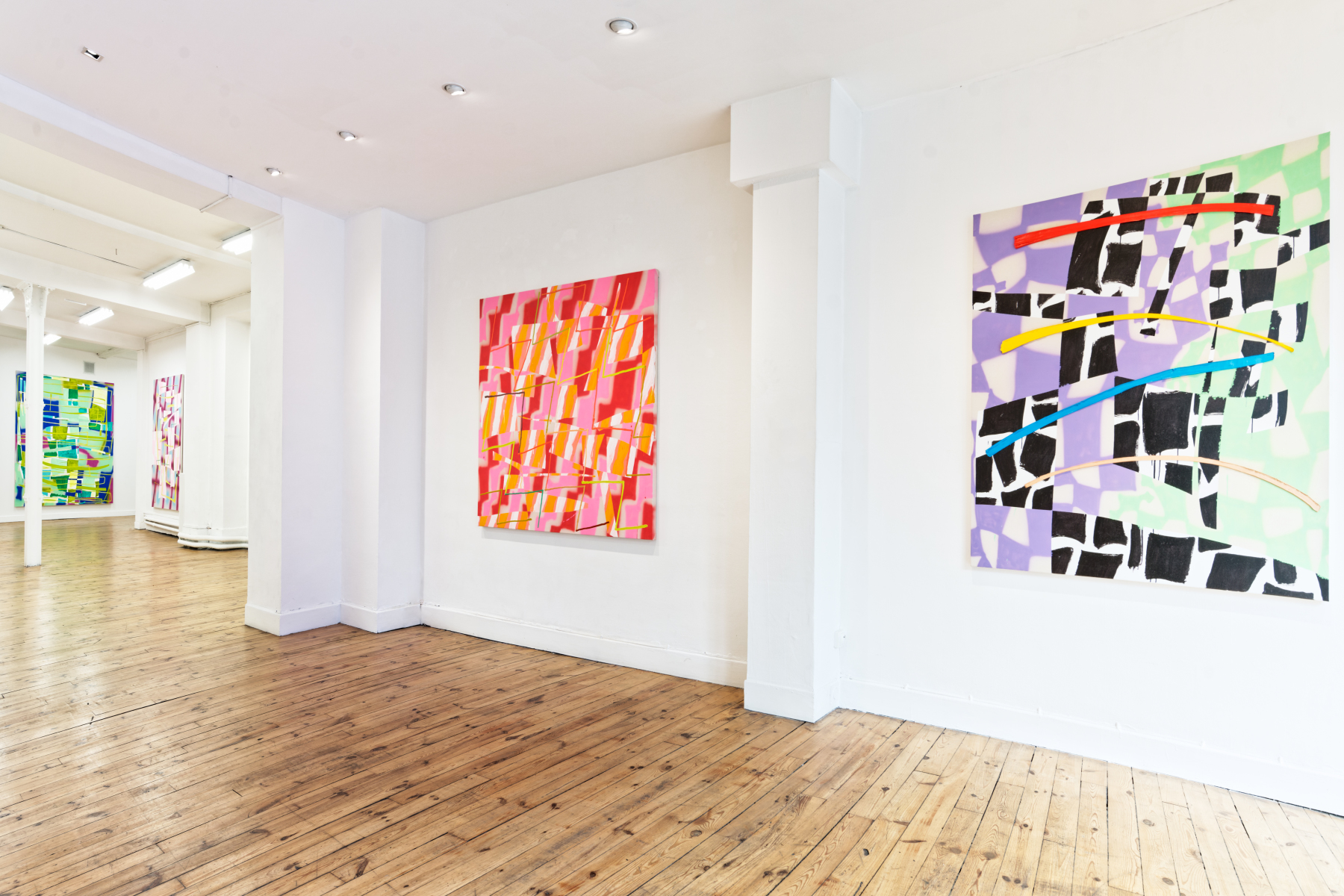 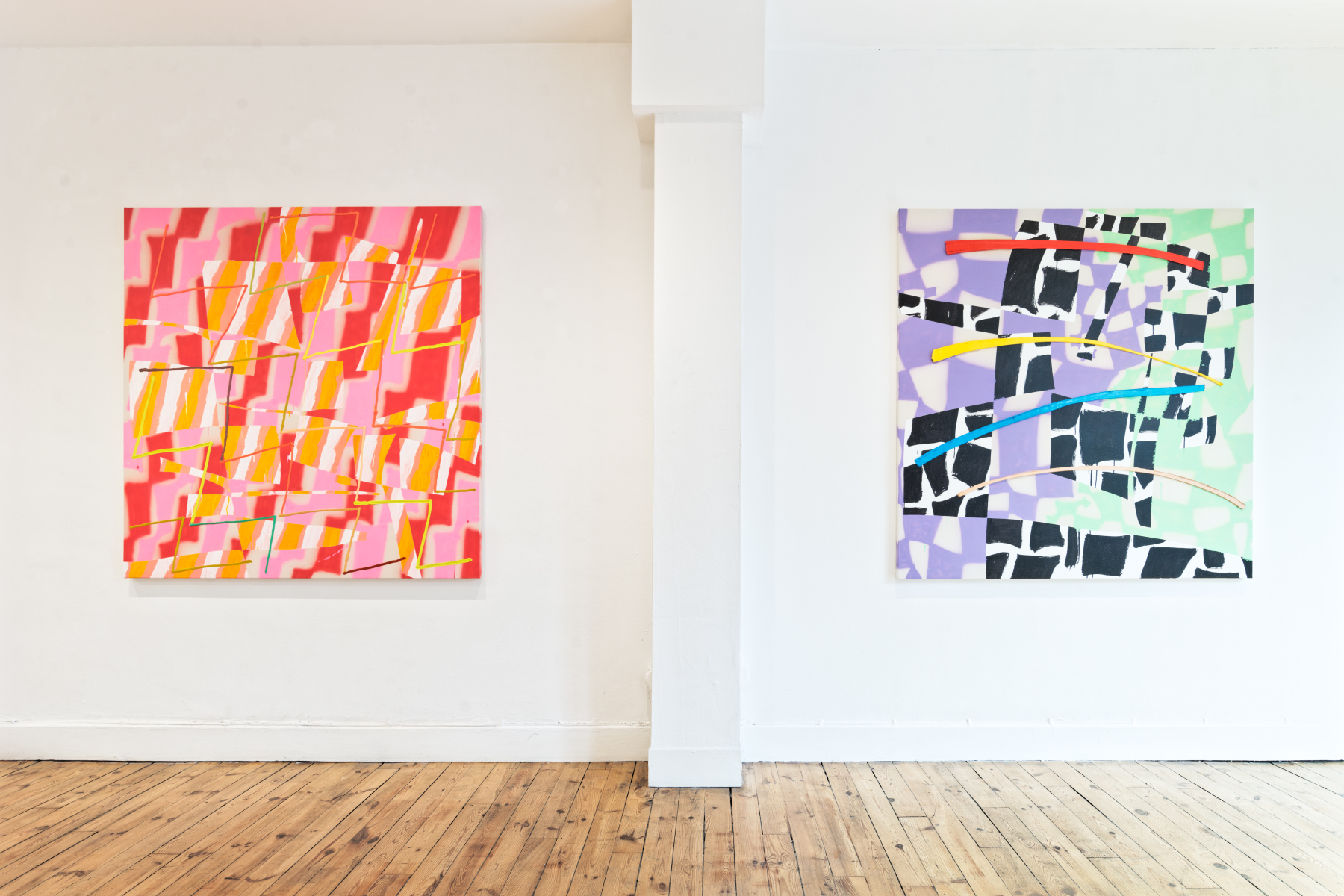 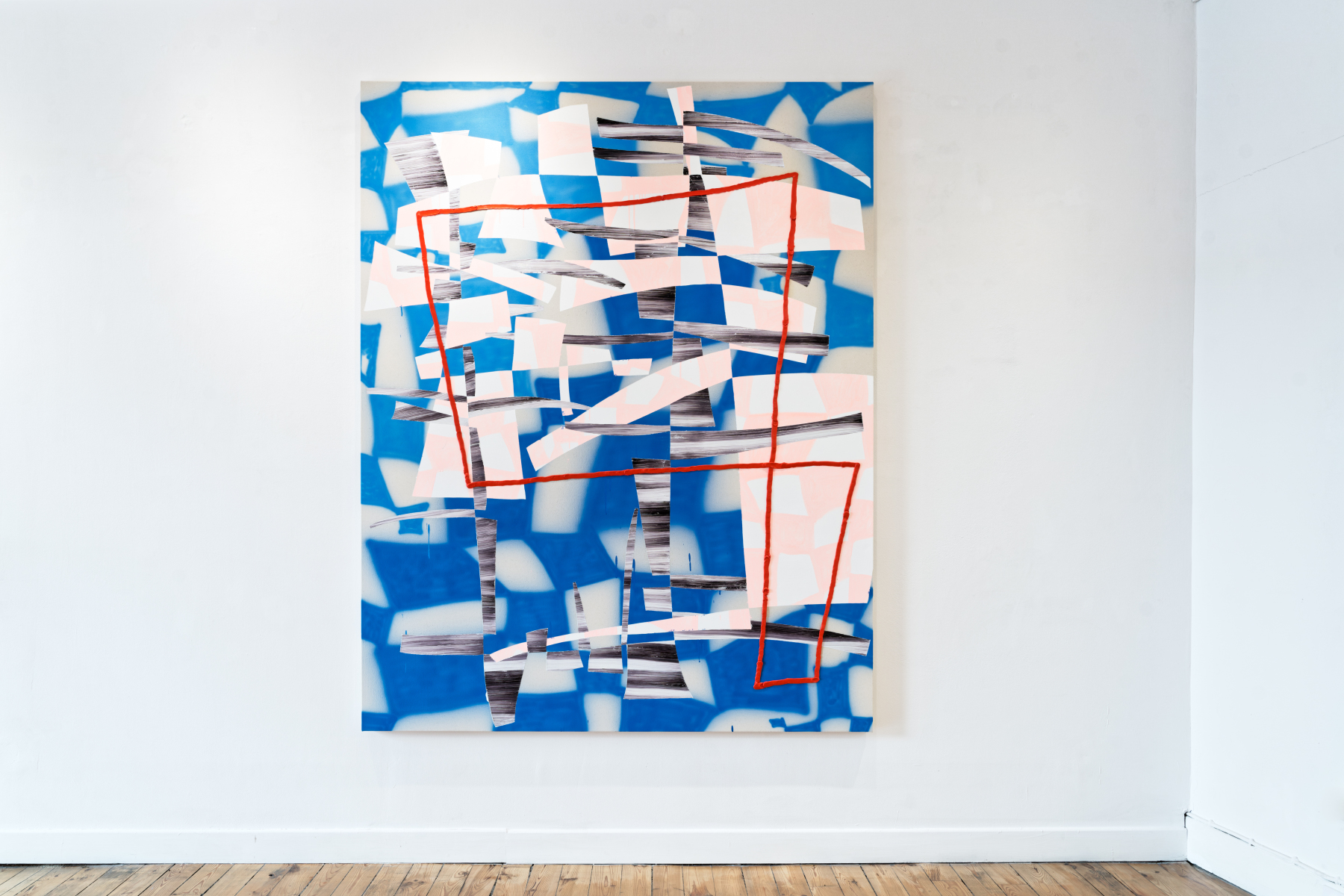 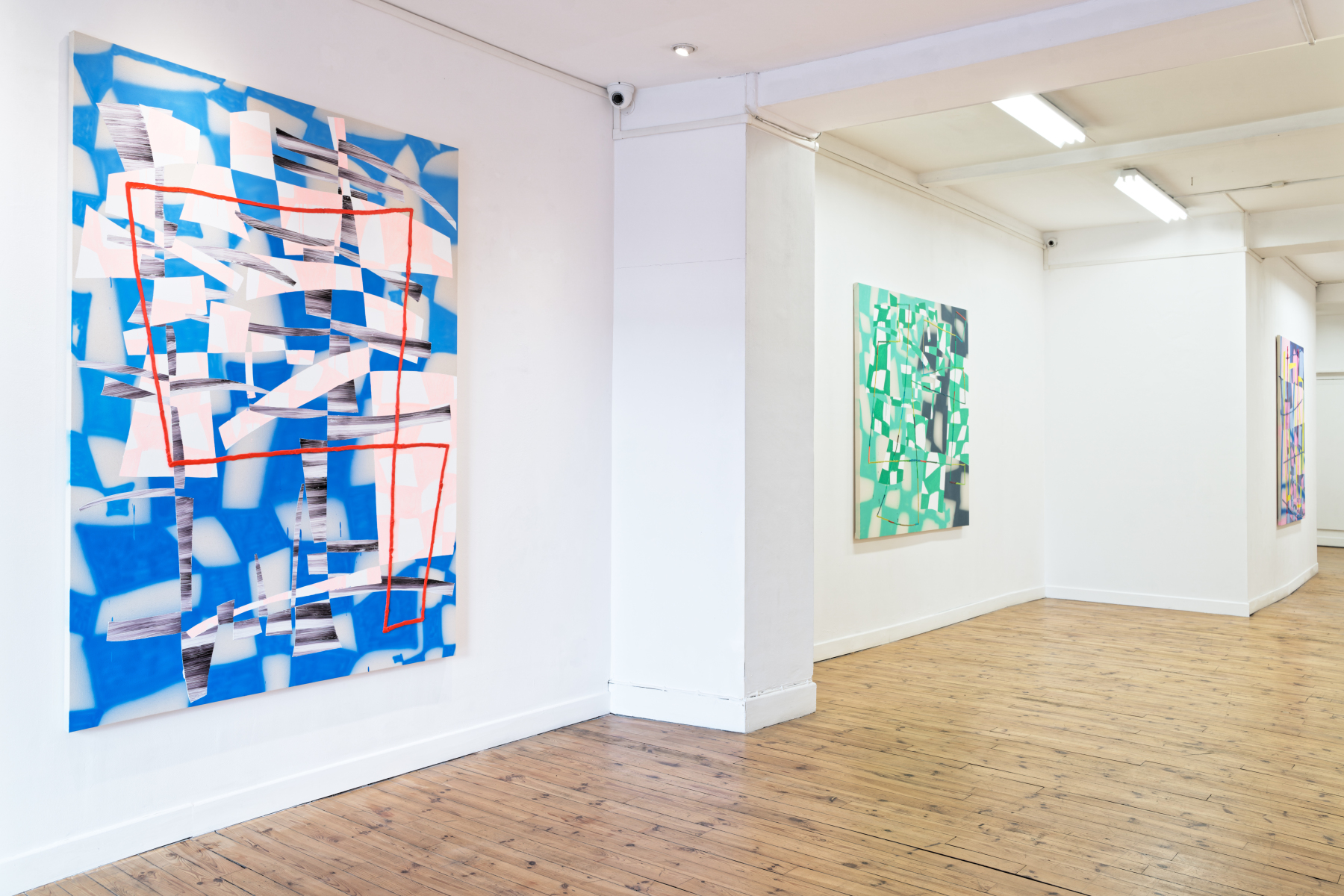 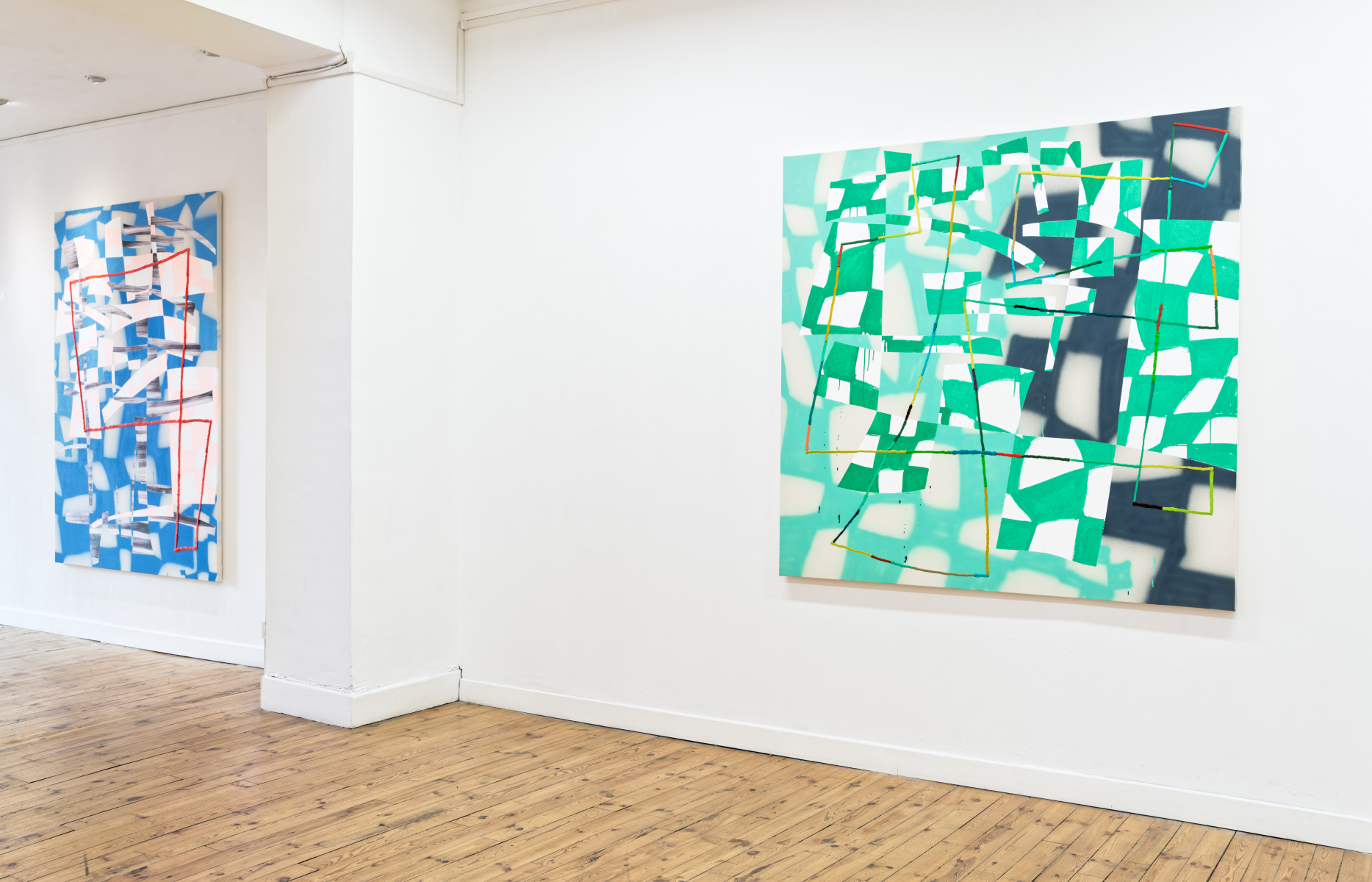 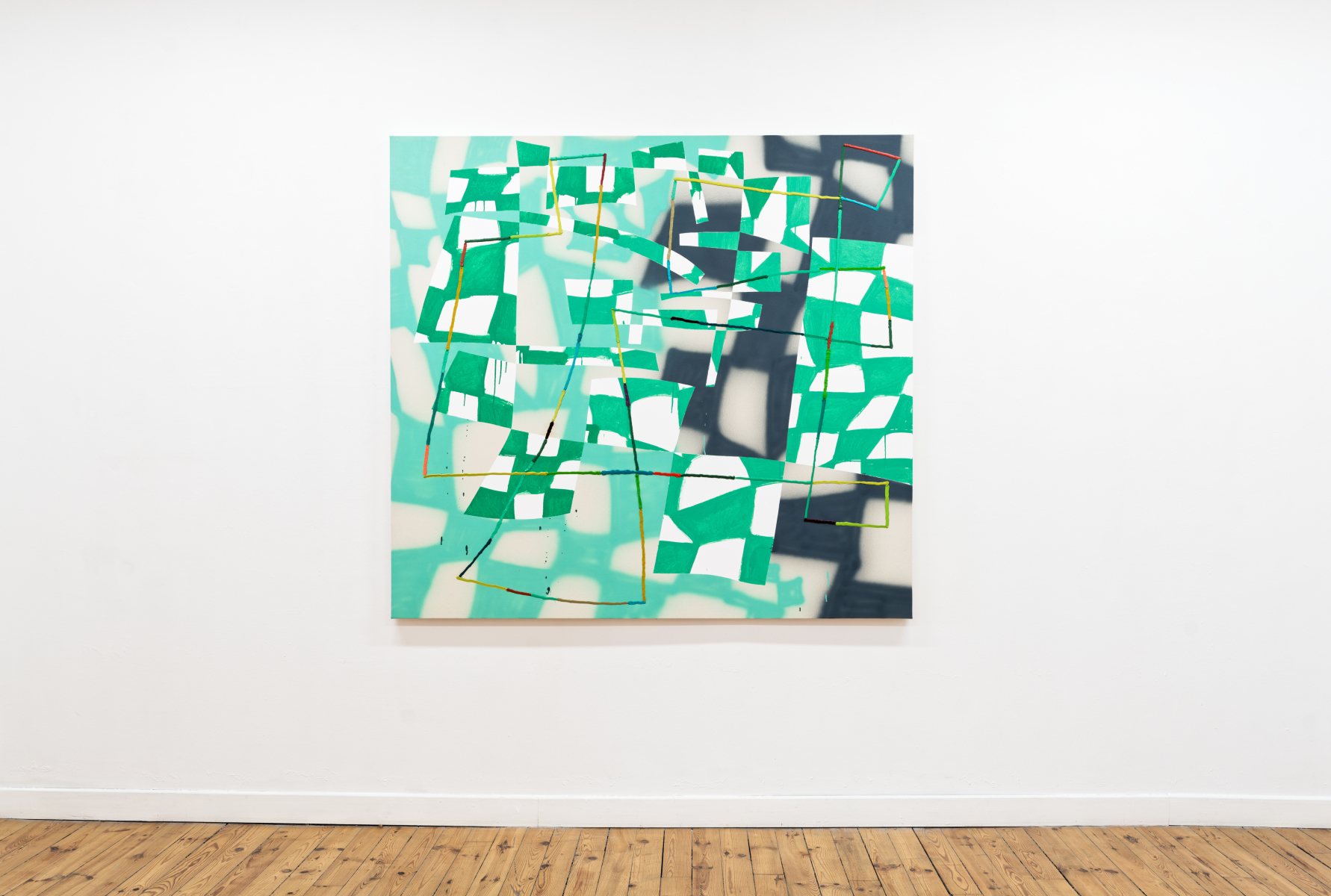 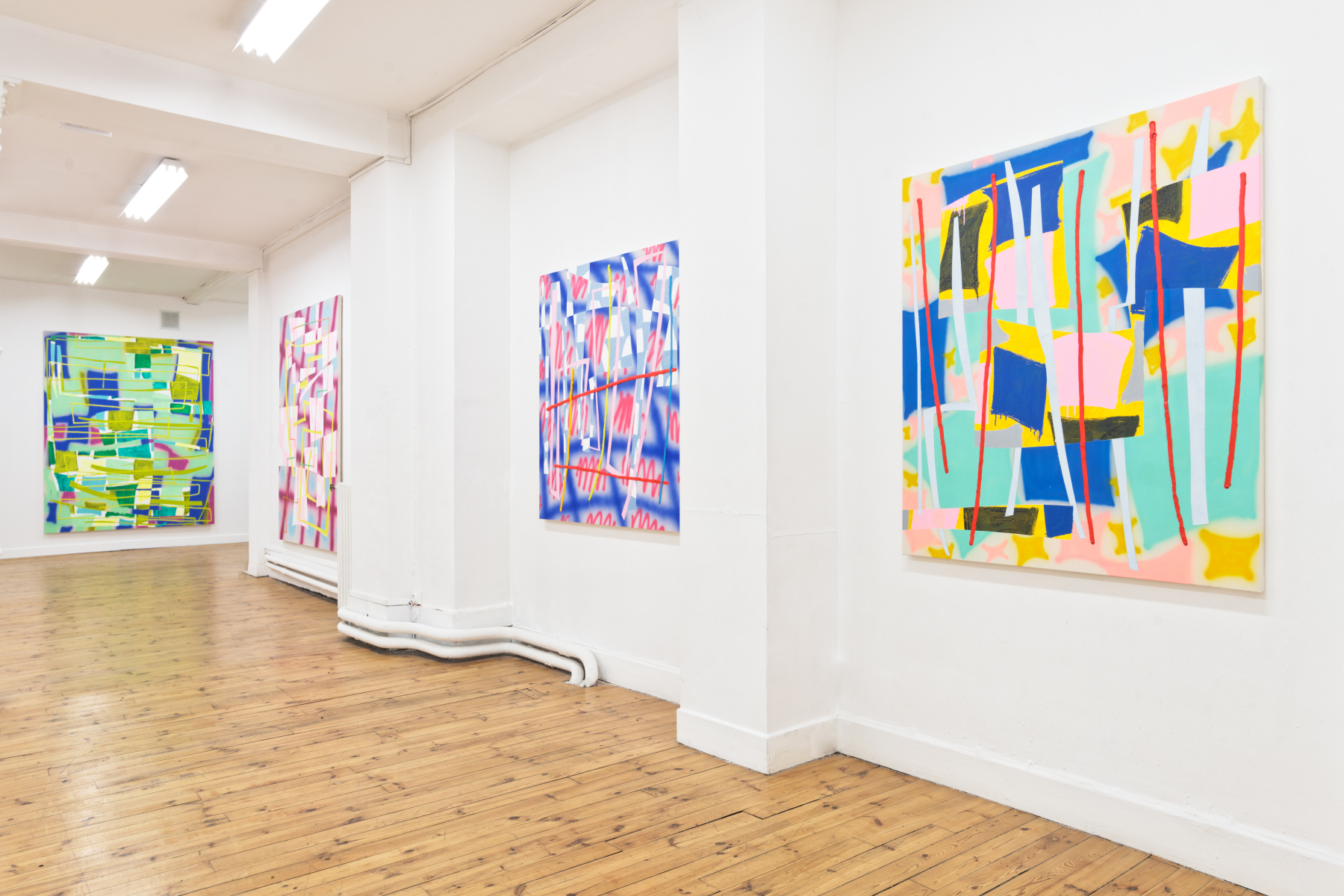 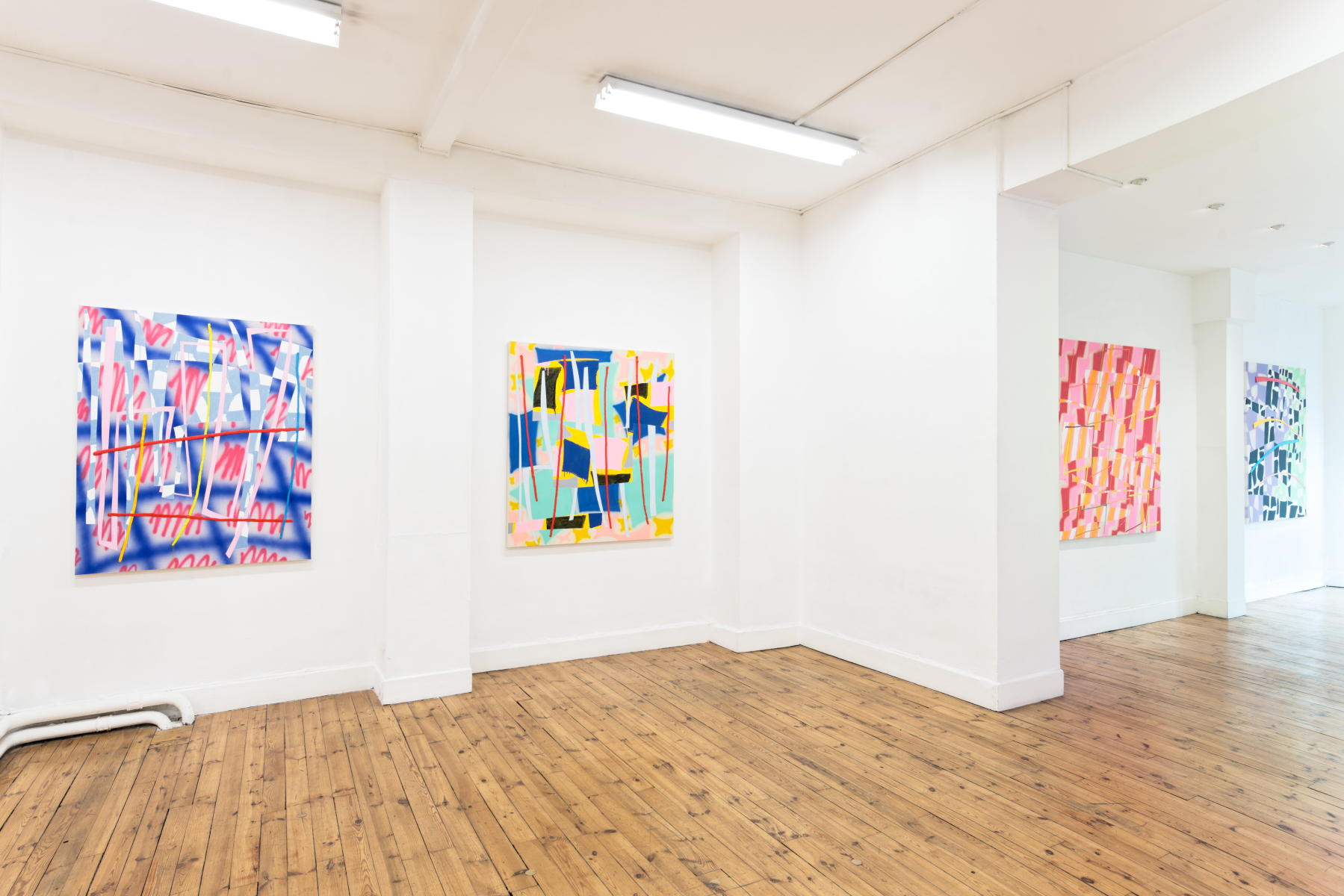 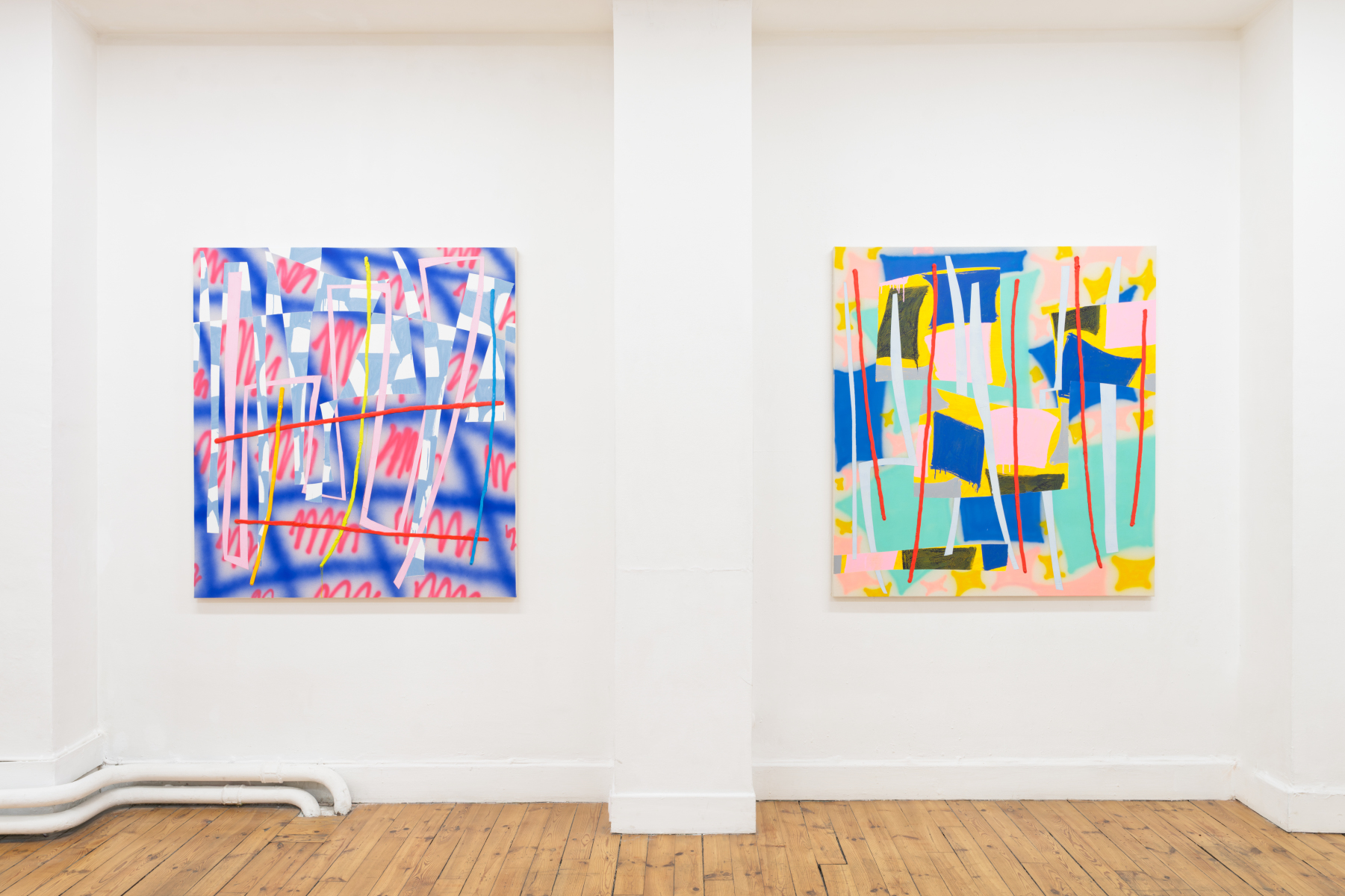 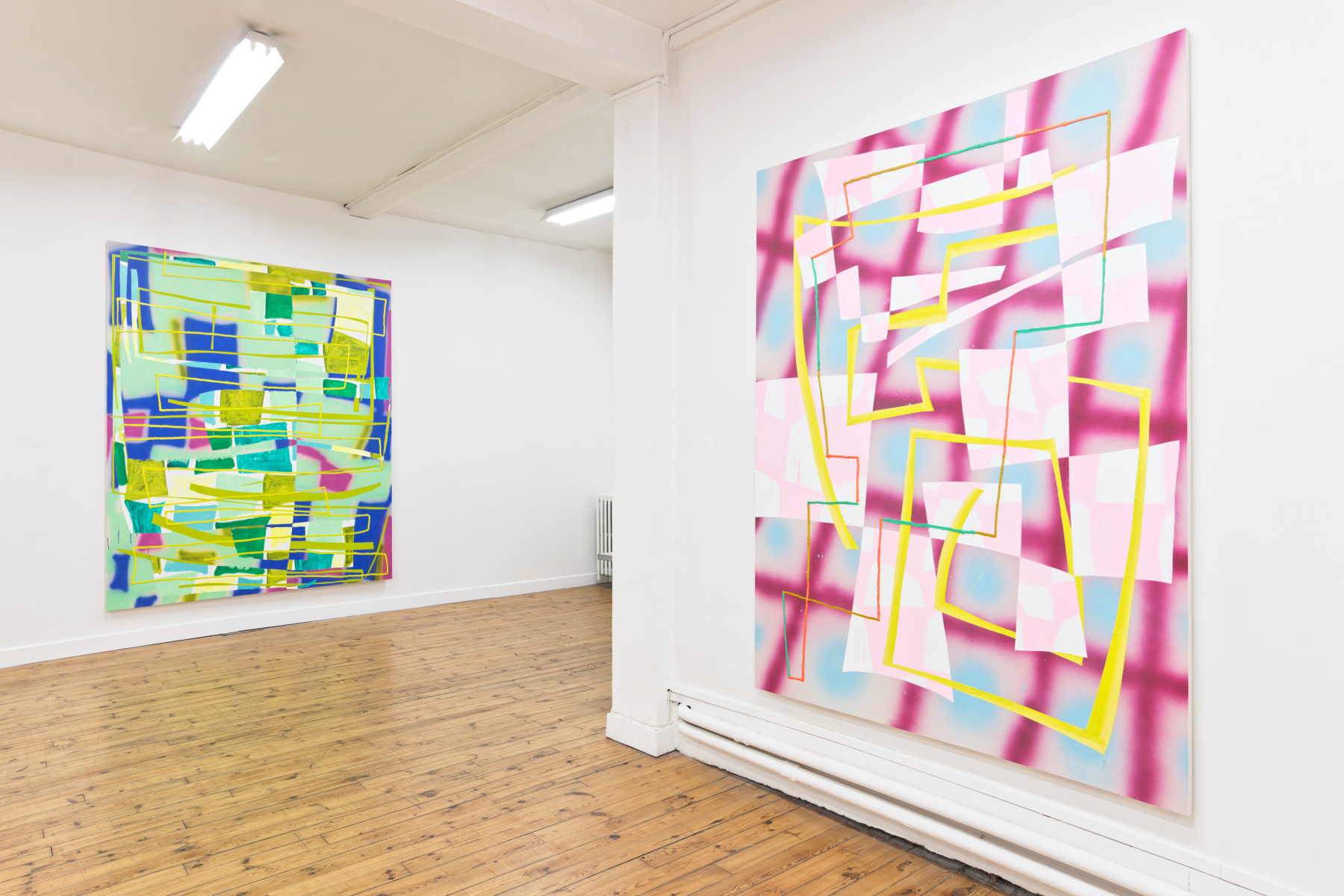 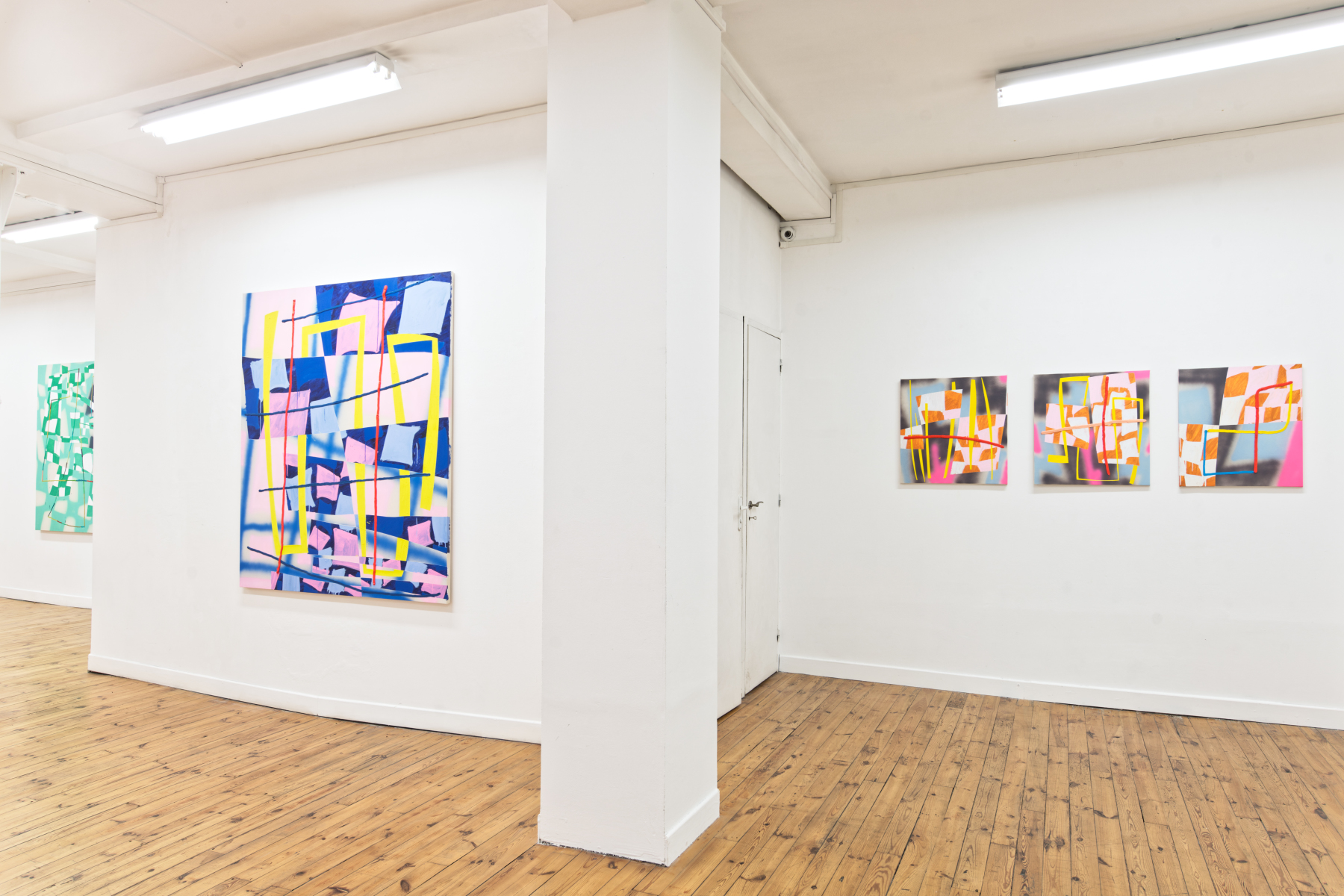 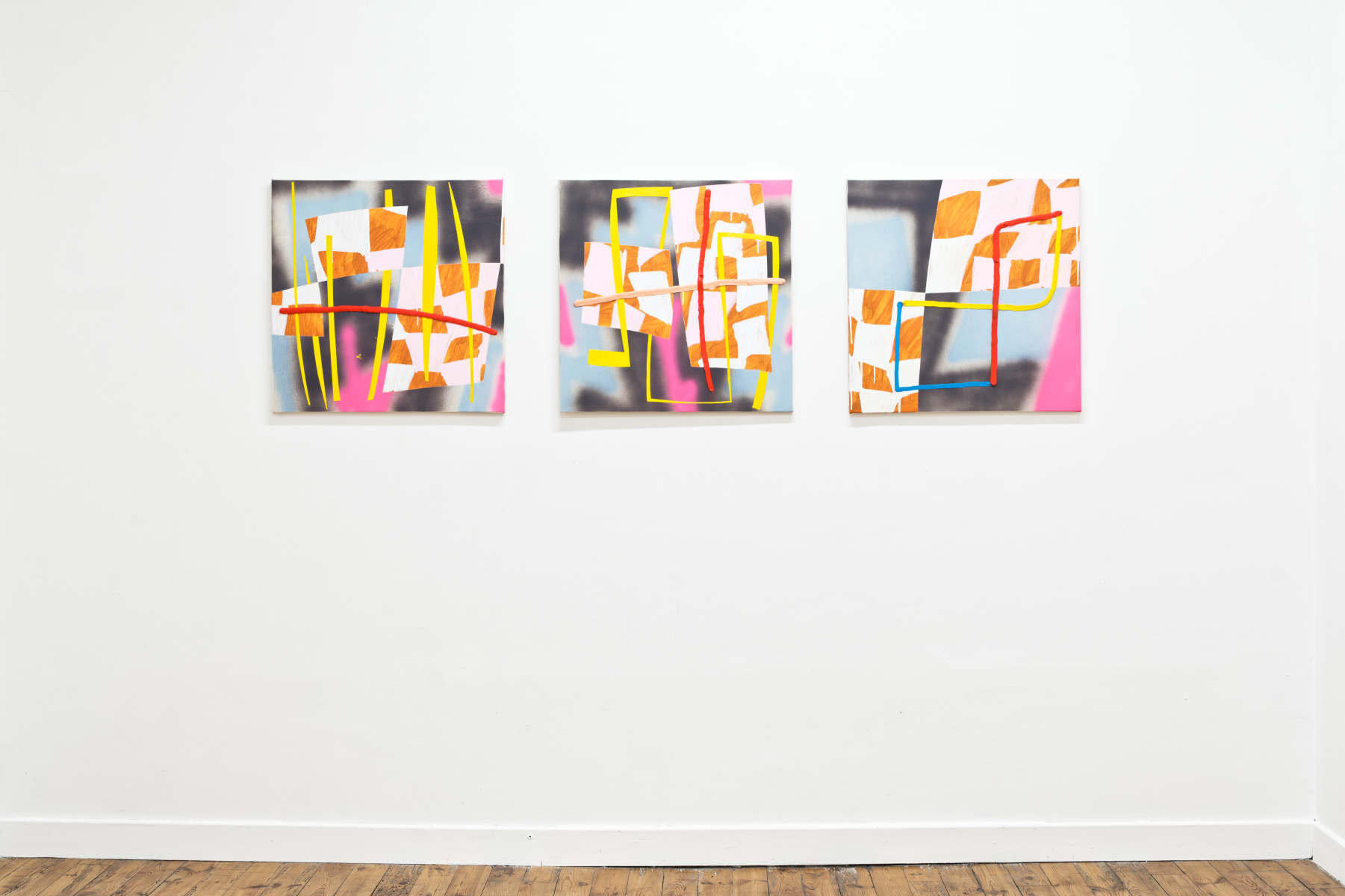 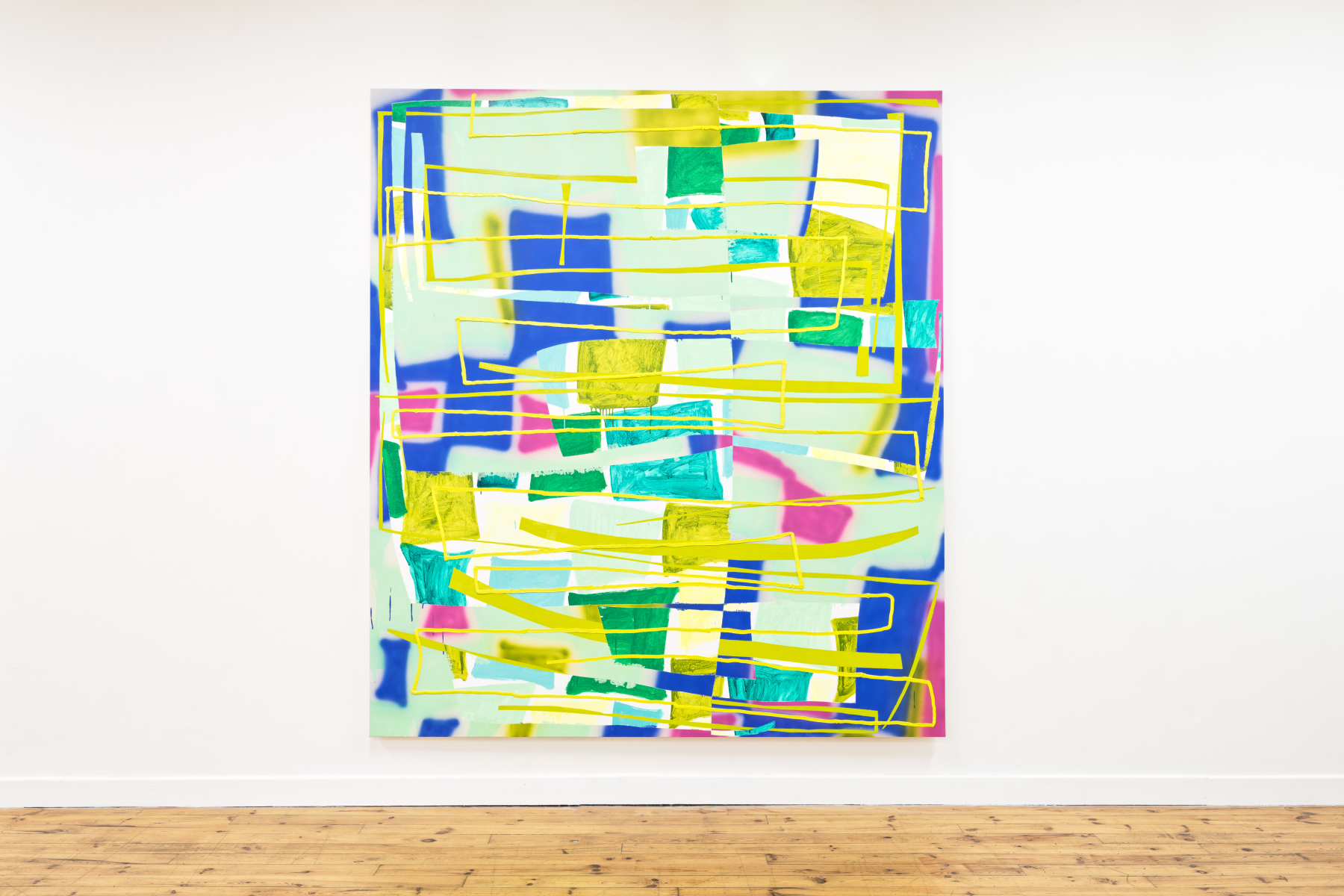 
Ceysson & Bénétière is pleased to present / Z / Z /, an exhibition of new paintings by Trudy Benson. Made while the artist was under quarantine in New York in 2020, these works respond to the complex environment within which they were created. In Benson’s third solo exhibition with the gallery, the artist continues to expand her formal relationship to cut-paper collage. The works in / Z / Z / reveal the artist’s process-based approach to abstraction, with mark-making that is sprayed, brushed on, and extruded. Grids, rectangles and repeating motifs feature heavily in this new body of work. The artist often leaves bare canvas, paints in layered patterns, and masks off surfaces to reveal complex shapes. Benson draws impasto marks using oil paint directly from the tube, which bear a unique, physical quality creating illusionistic depth. The visual intensity of these new works reveals the artists’ return to analog painting processes that represent a viable alternative to the digital.

The large scale works in / Z / Z / are characterized by vivid, almost aggressive bursts of color. The artist paints with a seemingly unlimited range: green patchwork patterns, hot oranges and fiery red extruded paint. The artist’s complex palette and densely layered surfaces force the audience to reorient to innumerable spatial and optical effects. Originally inspired by digital image making platforms and their relationship to visual art, these new works underscore Benson’s engagement with the legacy of 1980s painting including the groundbreaking work of Stanley Whitney and Elizabeth Murray. Whitney and Murray, among other painters of their generation, sought to reinvent abstraction in a post-Vietnam era rife with social unrest and disillusionment. They went on to make highly expressive works that were unburdened by austere relationships to color.

The artist spent quarantine working indoors, relatively away from outside world. It is no wonder that these works have taken on a dimension of interior life; a patchwork quilt pattern motif features heavily in this series. For this pattern, Benson uses a Z grid. And one of her titles gives a clue to its foundation. For Arp, (2020) reveals her fascination with the cut paper work of Jean Arp. Arp, a central figure of Dada, made his collages by using chance operations and gravity. He began by tearing paper into pieces and letting them fall to the floor. He would then paste each scrap where it landed. The resulting asymmetrical grids bear an affinity to Benson’s new paintings.

Abstract painting around the 2010s was reaching a breaking point, one that would soon give way to a generation who retained the ability to look both forward and backward in time. The aggressive materiality and digital imagery of Benson’s paintings, with their gradients, drop shadows, and window-like orientation, fit squarely within this moment. Ten years later, Benson’s new paintings employ a decidedly playful approach that revel in materiality. The works in this exhibit are wonderfully cartoonish; and spring off the wall at the viewer while receding into deep space. The artist states, “these days, when almost anything can be experienced virtually, a painting (which at one time was a virtual experience: a window) can now be decidedly phenomenological.”

Trudy Benson is an artist who lives and works in Brooklyn, New York. She was born in Richmond, Virginia in 1985. She received an MFA from the Pratt Institute in New York and a BFA from Virginia Commonwealth University. Her work has been included in exhibitions at Museum of Contemporary Art, Denver; Sperone Westwater, New York; Saatchi Gallery, London; Centre d'Art Meymac, France; and Museo de los Pintores Oaxaqueños, Oaxaca, MX. She has had solo exhibitions at LOYAL, Stockholm; Team (bungalow), Los Angeles; Lyles & King, New York; Lisa Cooley, New York; Half Gallery, New York; Ceysson & Bénétière, Luxembourg and Paris, and Ribordy Contemporary, Geneva.
Her work has been reviewed in the New York Times, Artforum, ARTnews, and Modern Painters, among others. She is represented by Ribordy Contemporary, Geneva; and Ceysson & Bénétière, Luxembourg and France.